Time to man up: top grooming treatments in London for men

The aim of this men-only haven in Fulham is to change people’s views of male grooming by showing that looking good “improves your opportunities in life” and that taking care of yourself is simple. Get a facial tailored to your own skin, whether that’s dry, oily or combination. You’ll have a steam exfoliation and removal of unattractive blackheads before a lymphatic drainage massage is performed on your face and shoulders to get rid of toxins. To finish, you’ll be treated to a relaxing mask.

Between driving dangerously, Top Gear’s Richard Hammond visits this salon just off the King’s Road. Make him proud by giving your hair a quick treat with a hydrating and energising Kerastase treatment, that’ll leave your hair feeling ultra-conditioned. You’ll also be chilled into blissful relaxation with a head massage and the treatment will end with a total cleanse with a shampoo to suit your hair type. Richard Ward, who runs the salon, also styles hair on ITV’s popular Lorraine’s Breakfast Show, so you’ll be in good hands. 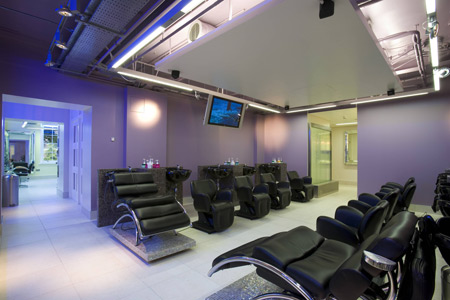 Keeping your back fuzz-free is important. That’s why Karine Jackson has added the angel wings wax to the men’s spa at her Covent Garden salon. It focuses specifically on the shoulders and upper back, which is a common spot for unwanted hair growth among men. The ladies will definitely appreciate this one, too.

Like waxing, fake tanning is a male grooming habit that’s on the rise – celebrity tanner James Harkett, who works at the W Hotel’s AWAY Spa has noticed a sharp increase in the number of men getting bronzed at the salon. Get your loins leathered one of their four signature tans – The New York (a very subtle glow), The London (one shade deeper), The Barcelona (a layered, darker tone) and The Santa Fe (deep shades of hazlenut and chocolate). That’ll make stripping off on the beach for your first trip of the summer much easier.

Put the “man” back into manicure by geting your hands seen to. This one’s quick, cheap and gives you neat and ridge-free nails with a cut, file and buff. But don’t worry – it’s not like a girl’s manicure and there’ll be no shiny pink polish in sight.

A grey day in beautiful London

After dark special at Blackpool dungeon