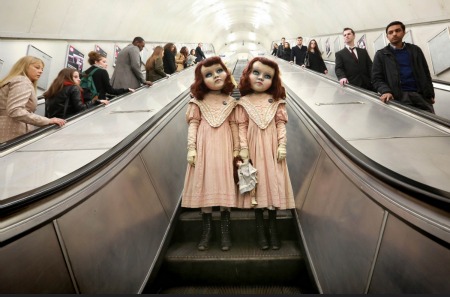 The sightings which led to numerous confused commuter posts on social media were later revealed to be an elaborate stunt by Thorpe Park Resort to promote the world’s first psychological theme park attraction created by Derren Brown arriving in spring 2016.

The spine chilling walking Victorian twins, reminiscent of The Grady sisters from the horror film ‘The Shining’ are part of a week-long marketing plan which will see the ‘living dolls’ roaming high footfall commuter areas across London.

The latest activity provides the first clues as to the nature of the forthcoming attraction.

The new Derren Brown experience will be the world’s only fully immersive psychological attraction, designed to manipulate the human mind.

Class of the week: Shape up with hip hop dance classes at Pineapple dance studios in London