After a swanky reception at Buckingham Palace this Tuesday, the athletes were celebrating in Mayfair with other members of Team GB.

Apparently the medals were in Partridge’s Blazer, which was stolen during the evening at around 5am.

The rower proudly won his bronze as part of the rowing team of eight. 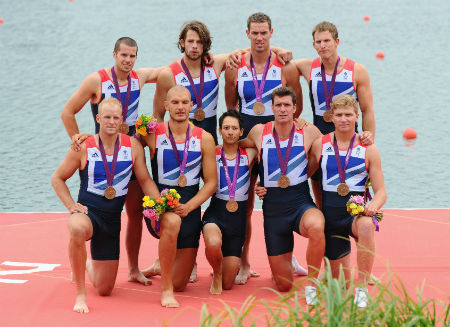 After the night out Macleod posted on Twitter: “My medal was also stolen at the same time. Totally devastated.”

Partridge explained to the BBC: “It’s very, very upsetting. It would mean everything to me to get them back.”

CCTV footage captured a man on tape, the athletes are keen to speak to the man from the footage in person, and try and track down the medals.

“I worked for 12 years of my life to try to achieve something at the Olympic Games and that’s what I’ve got to show for it,” Partridge explained to the BBC. He is worried his 16-month-old daughter will never get to see his medal.

Attendees at the event at Buckingham Palace included the Queen, the  Duke of Edinburgh, the Duchess of Cambridge, the Prime Minister David Cameron. Plus, athletes and the London 2012 organising committee and chairman Lord Coe.

“No arrests have been made. Inquiries are ongoing and the property is still outstanding,” said a Metropolitan Police spokesman to the BBC.

The police are calling for anyone who knows the location of the medals, or information to call 101 or Crimestoppers on 0800 555 111.

One for the IT crowd