Instead of the customary shirt-off celebration, which automatically earns a player a yellow card, Vucinic stripped off his shorts after taking his team to 1-0 up and waved them above his head.

While the crowd were treated to a clear view of butt cheeks, the player was gifted a yellow card in front of 40,000 home fans in Turin. 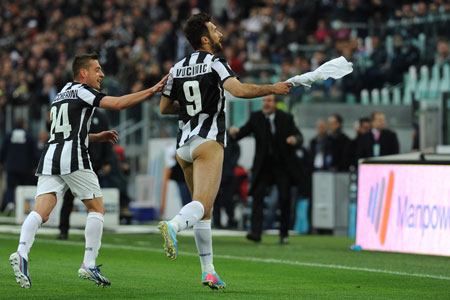 Adding to the absurdity of it all, the goal won’t exactly be gracing the highlights reels for years to come.

Vucinic’s goal was a penalty against the last-placed Pescara – Juventus lead the league nine points ahead of second-placed Napoli.

Kim Jong-un supposedly executes ‘enemy of the state’ by flamethrower