Video: Mass brawl after England’s U21 clash with Serbia over racist abuse from the crowd

“Punches, headbutts were thrown, and God knows what else,” England manager Stuart Pearce said after the game. “I think there were one of two racist incidents from the crowd and we have reported them to UEFA. They will have to deal with that. I am proud of my players and the staff”.

Connor Wickham’s last gasp winner for the Three Lions which saw them progress through to next summer’s European Championship, proved the catalyst for a match which had been marred by racist abuse of England players throughout with calls for Serbia to be harshly punished for the violent scenes that marked the end of the game. 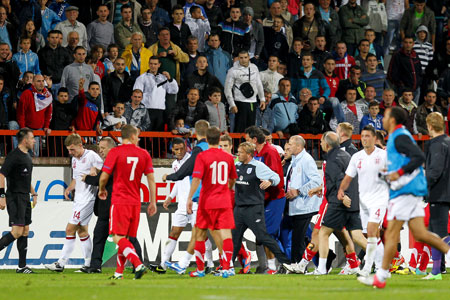 Racist jeers rang out around the ground and missiles were thrown onto the pitch as England celebrated Wickman’s injury time winner, with England’s Danny Rose putting his arms under his armpits in response to the monkey chants from the home fans.

As England attempted to leave the pitch, Serbian players and coaching staff threw punches and kicks at England players and staff. England goalkeeper Jack Butland had a seat thrown at him from the crowd, England coach Steve Wigley was thrown to the ground and fellow coach Martin Thomas being headbuted in one particular incident.

The incident has sparked calls for Serbia to severely punished by UEFA, and it brings back into focus the issue of racism in football after the incidents that occurred at this summer’s Euros in Poland and the Ukraine.

British success at the Emmys