Pismo Beach, California local Goatee has been hitting the waves for some now, after being taught the finer points of surfing by her friend, Dana McGregor. 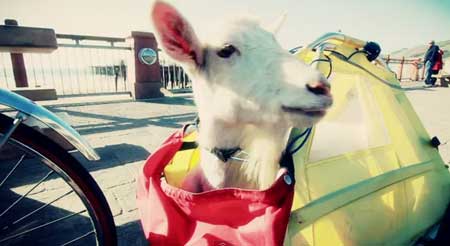 The four-legged beach goddess is often seen dropping in on as she catches the tiny waves waves and surfs her way to the shore.

The two-year-old wears a yellow life-jacket to make sure swimmers and other surfers are.

McGregor originally bought Goatee to eat weeds in his garden but soon became fond of her and kept her as a pet. 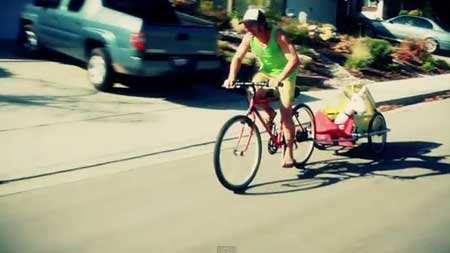 Now, after developing her watery talents, Goatee, now has become an internet sensation, racking up more than 50,000 hits onYouTube.

Goatees facebook page lists among her awards The Most Interesting Goat of the year by Flo Soccer Ministries and the World Record Holder, First Goat to Successfully surf a wave and enjoy it.

She lists her interests as: “surfing, soccer, eating greens, working with Dana, hanging out with dana, riding in the car with Dana, going everywhere with Dana.”

In fact, Goatee and Macgregor have become such firm friends that she tags along wherever he goes – in a trailer attached to the back of his bike, shopping and even nights out.

From Jack the Ripper to East London Street Art, our pick of the top city walking tours

Running with the bulls

Chesney Hawkes drops out of Dancing On Ice