A photo of the billionaire businessman with the former South African president and anti-apartheid activist appeared with the caption: “Did you know these two inspirational leaders share a birthday? Happy Birthday Nelson Mandela & Richard Branson!”

One user posted, rather diplomatically, “With respect to Mr Branson, they’re not quite inspirational in the same way.”

We’d have to agree that this does appear to be a social media blunder – either that, or the Virgin boss has a rather inflated sense of his own achievements. 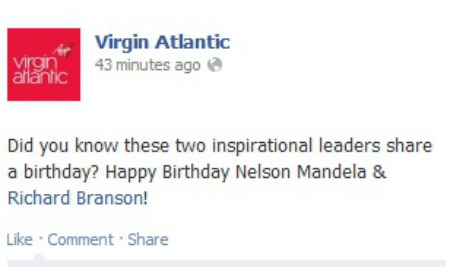 Another post read: “A very Happy Birthday to 2 very different but equally amazing and inspirational men :)”, seemingly achieving both a dig at the comparison and a chance at some free airline tickets.

While one user left us wondering whether she was being sarcastic when she commented: “Happy Birthday Sir Richard!! You are an inspiration to me”, another left us in no doubt when he wrote: “Richard Branson – for all his success – is not worthy to even share the same toilet as Mandela. Pathetic.”

A more non-committal chap said:”Dunno if im comfortable with putting Mandela and Branson in the same league but happy bday i guess.”

Perhaps the most well thought out comment read: “How can you put Mandela and Branson in the same group. Branson isn’t inspirational. A guy who owns a multi national company and Mandela a true man had to fight for human rights. I know who I would call my leader.”

Canadian parliament debates the dangers of a zombie invasion