The couple, who acknowledge they are an unlikely match, also reveal their pet names for each other in their first joint interview.

They told Hello! magazine that Warne is known as “Big Blond”, while model and businesswoman Hurley has acquired the nickname “Luna” – among other things.

“Elizabeth calls me a lot more than just the Big Blond – she has dozens of names for me, all of them too embarrassing to share,” Shane told Hello!.

“I have a handful for her, too, but I usually call her Luna as there was a terrible paparazzi picture of her once looming in to kiss me, which reminded me of the massive mouth at the entrance of Luna Park, the Australian theme park.” 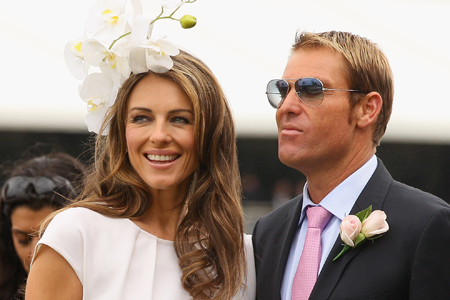 The pair – who posed for the magazine in Sri Lanka in matching white outfits, echoing 42-year-old Warne’s cricket gear – said the dual celebrations are to allow their family and friends a chance to attend.

“We are very mindful of the fact that our loved ones live at opposite ends of the world,” said Warne, whose three children Brooke, 14, Jackson, 12, and Summer, 10, live with his ex-wife in Melbourne.

Mum-of-one Hurley, 46, said of her partner: “I am extremely happy when I’m with Shane. We are very similar in many ways.

“Despite differences in our backgrounds and careers, we both come from very secure, loving homes and to me that says a lot.” 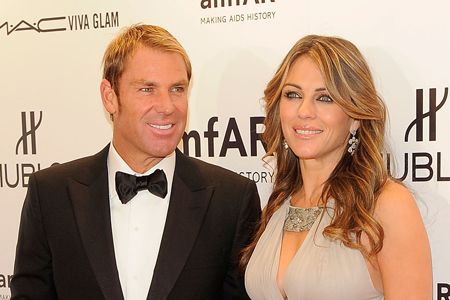 Hurley – who was previously married to businessman Arun Nayar – announced her engagement to Warne in October of last year.

She said her 10-year-old son Damian has been delighted to have “three new playmates on tap” when Warne – who is now based at Hurley’s Gloucestershire farm – has his children around.

“Damian adores them all and rotates round sleeping in all of their bedrooms when we’re in Australia,” she said.

Hurley admitted it was a big change to suddenly have so many children in her life, but adder: “I love it when we’re all together. I just try to be the best stepmum that I can.”

Warne said of their relationship: “I think we just `get’ each other and it feels like we have known one another forever. I understand why Elizabeth and I getting together initially seemed strange to some people and why it created a lot of interest. We are from different worlds, but funnily enough they are very much the same, too.”

Scott Pollock – Gang Bang liaison: Man in the USA arrested after leaving his ‘business’ card at a hotel

The Best Beaches in the UK