Wayne Rooney is at the centre of a Twitter storm after offering to fight a Liverpool fan who was tweeting him abuse.

Rooney became embroiled in the Twitter agrgy-bargy in front of his 573,000 followers who witnessed the Manchester United player telling his adversary: “I’ll put u asleep in 10 seconds”.

Rooney was responding to a charming Twitter message from @sam-oldham-LFC which read: “Rooney ya fat whore ill smash ya head in with a pitchin wedge an bury ya with a ballast fork ya fat ugly lil nonse.”*

Rooney responded to the tweet with: ‘haha u know were I train every day kid come and do it good luck’.

To which @sam-oldham-LFC replied: “snd ill be down tomorrow lad in me twin turbo nissan micra”. 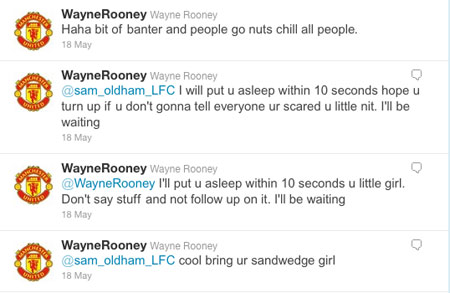 Other Twitter users soon waded in, prompting Rooney to make light of the confrontation, tweeting: “Haha bit of banter and people go nuts chill all people.”

Rooney has attracted criticism for the Twitter row with commentators suggesting it could incite rival fans.

The Manchester United player is familiar with controversy though, reeling from one negative headline to another.

Most recently, Rooney’s been slammed for by swearing into a camera during a win over West Ham and apparently flicking the V-sign at Chelsea supporters during another recent win.

Sine last night’s exchange, Rooney has been causing more trouble on Twitter, telling Piers Morgan: “@piersmorgan did u win 1 for most boring show of the year. Stop hanging on to me pls. I don’t want to know u.”

To which Morgan replied: “That’s what you said to Sir Alex before he paid you £50mill”.

* For anyone wondering, a pitching wedge is a type of golf club, while a ballast fork is heavy-duty construction tool.

Nicolas Sarkozy and Carla Bruni give birth to a girl