08:30  Start your day early to avoid the masses who flock to Yuyuan Garden (yuyuantm.com/cn/yuyuan/en; admission £4) every weekend. This 400-year-old sanctuary is considered one of the world’s prettiest Chinese gardens, with hidden alcoves, carp-filled pools, bamboo-covered rockeries, bridges laden with tile dragons and some splendid pagodas and pavilions. There is an extremely tacky adjoining bazaar selling all manner of tourist paraphernalia.

10:00  Yuyuan is situated in Shanghai’s Old City, a world away from the modern metropolis outside the old perimeter. Today it gives a glimpse into genuine Chinese culture, with stunning temples hidden down small, twisting alleys and scores of street markets selling clothes, fish and vegetables.

12:00  For a sharp contrast between old and new, head to Renmin Square, the modern centre of this busy city. When you start to feel claustrophobic thanks to the sheer volume of people, head to Renmin Park, a shady haven in the midst of Shanghai’s constantly pulsing heart.

12:30  Despite China’s fascinating 5000-year history, Shanghai is strangely bereft of good quality museums – this is more a city for soaking up the atmosphere than racing around the sights. That said, the Shanghai Museum (shanghaimuseum.net; admission £2) has an incredible collection of artefacts, from bronze weapons and cooking utensils with intricate designs, to traditional costumes and Ming dynasty artwork and ceramics. It would be easy to spend the whole afternoon here, so get your skates on.

14:30  Fuel up on some traditional dumplings (xiaolong bao) to get your energy levels back up. Sadly, the best ones are not to be found in a dingy little shack in the Old City or down a hidden side street in a traditional restaurant. No, they’re in Din Tai Fung (Super Brand Mall, 168, Lujiazuixi Rd), a Taiwanese chain in a clean-cut, soulless mall. But don’t worry, as soon as you taste these pork- or crab-filled delicacies, you won’t care where you are.

16:00  Make sure you take some time to people-watch along the Bund, Shanghai’s colonial riverfront promenade, rife with reminders of the city’s prosperity. Wealthy locals and famous faces spend hours here, taking a stroll or dropping in to the numerous international designer boutiques or expensive celebrity restaurants. Don’t miss the brilliant art deco Peace Hotel with a traditional Chinese green copper roof. It has recently reopened after a £50m refurbishment.

18:00 Cross the river using the bizarre Bund Sightseeing Tunnel, built solely for tourists and surely unmatched in terms of the surreal. You’ll be whisked along a train track underground while lasers flash and a futuristic voice whispers nonsensical phrases including “nascent magma” and “fossiled variants”. So ridiculous, it almost justifies the £5 fee. Almost.

18:15 Once in Pudong on the other side of the river, visit Shanghai’s most famous landmark, the Oriental Pearl TV Tower. A prominent symbol of the city’s revolutionary modernisation, it’s a great spot to catch exhilarating views
of the Bund opposite.

20:30  Perhaps more impressive is the view from Cloud 9 Bar in the Grand Hyatt Hotel (88 Century Avenue). Don your finest robes and head to the 87th floor to sip on cocktails and marvel at the sheer magnitude of the city, and the flashing lights stretching to the horizon and beyond. Then choose from a multitude of glitzy clubs. Try Babyface (138 Huai Hai Zhong Lu) and drink as much as you like
for less than a tenner. 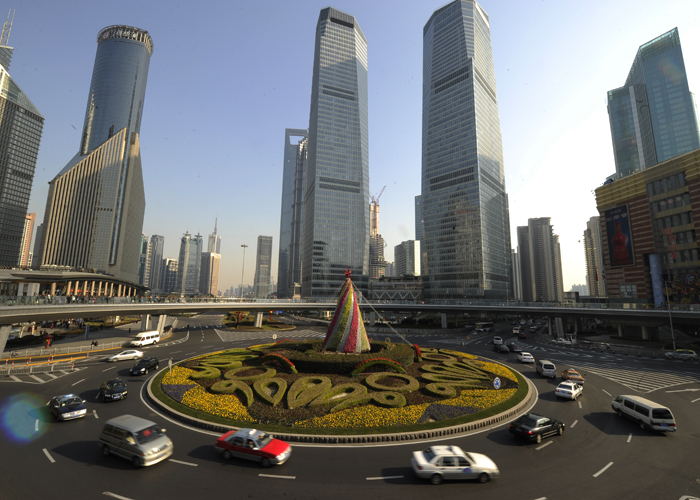 09:00  If you can drag yourself out of bed, make a beeline for the Moganshan Art District (50 Moganshan Rd). This network of old industrial buildings houses a number of galleries and studios jam-packed with contemporary art and bohemian hipsters.

12:30  When in China, you have to sample some Uyghur food from the north-western Muslim province of Xinjiang. It has a distinct history and culture and an entirely different cuisine, which includes delicious (and spicy) beef and lamb kebabs. Chow down at Ani Bayi (759 Quyang Lu), with friendly staff and occasional dance performances.

14:00  It’s time for some retail therapy, China-style. Get down to Nanjing Lu, one of the world’s busiest shopping streets. Dating back to 1851, this 5.5km commercial street gives the impression of a booming capitalist economy, with super-malls, hotels and chic shops.

19:00  If you’re leaving by plane, take the Maglev train, which embodies the city’s spirit – fast-paced and modern.
It runs to the airport in just eight minutes, reaching speeds of up to 270mph. A single ticket costs £5 (smtdc.com/en).