Rupert Murdoch's wife, Wendi Deng Murdoch, stole the show yesterday, springing into action to protect her husband when prankster ‘Jonnie Marbles’ attacked him with a foam pie during the Parliamentary hearing into the phone hacking scandal.

Twitter was abuzz with Wendi Murdoch after the 42-year-old was seen leaping from her seat, whacking comedian Jonnie Marbles – real name Jonathan May-Bowles – over the head as he attempted to splat his cream pie in her 80-year-old husband’s face. 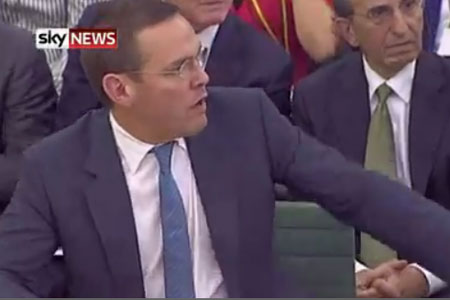 James Murdoch appears shocked as he sees Jonnie Marbles go for his father, Rupert, with a foam pie.

The scene descended into comedy when Marbles broke into the hearing and attempted to splat Murdoch with shaving foam.

A female MP who had been questioning the Murdoch cried: “Oh no!” while another voice was heard shouting: “Outrage!”

However Wendi Deng proved a fearless protector of her frail husband Rupert and the pie-throwing incident had the unexpected effect of garnering sympathy for Murdoch Snr as he faced questioning from MPs over the phone hacking scandal.

Wendi Murdoch was labelled the Smack Down Sister on Chinese websites and was praised for her “left hook” by MP Tom Watson, despite the fact that she hit Marbles with her right hand. 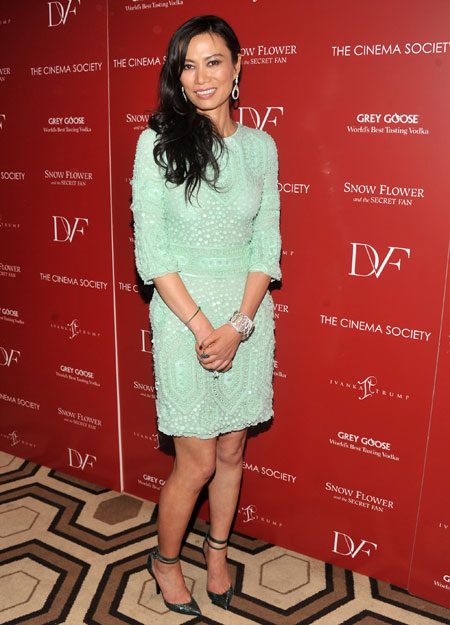 Rupert Murdoch's wife, Wendi Deng, attends The Cinema Society screening of Snow Flower And The Secret Fan at the

For many, the Wendi Deng pie-saving incident was the highlight of the lengthy proceedings, which saw News Corp boss Rupert Murdoch and his son James but in the hot seat over phone hacking at News of the World.

Footage showed that Marbles, not Murdoch, ended up with pie on his face and the stand-up comic was led away in handcuffs.

“Bet PM Dave is hoping that some clown chucks a pie at him today. Mrs Cam will struggle to match Mrs Murdoch and her fine counter punch,” tweeted sunderlandsmile.

“I am pleased to confirm that Mrs. Murdoch has agreed to take charge of Olympic security!” said DowningStCat.

“If only Wendi Deng could use her powers for good… Why, I'll bet she could clean up the Gotham City that is Britain,” MarinaHyde wrote.

Who is Wendi Deng Murdoch?

Wendi Deng Murdoch grew up in a middle-class family in China, the daughter of a factory director.

She attended Yale University business school when she moved to the US with the help of a couple from California. Reportedly, the husband in that couple later left his wife for the much-younger Wendi Deng.

After graduating, Wendi Deng landed a job at Star TV in Hong Kong (part of News Corp), a job she quit when she married News Corp boss Rupert Murdoch.

However Deng was far from a trophy wife and soon exerted her influence over News Corp, overseeing Chinese internet investments totalling between $35 million and $45m.

Deng was a keen volleyball player in her youth, perhaps explaining her impressive slap-down of Jonnie Marbles yesterday.