Gearing up for New Year’s Eve? Here are the world’s top ten cities for a NYE party…

Getting there: Take the train to Edinburgh with East Coast. Fares start from £26 when booked online.

What: After an early dinner, look out for neighbourhood bonfires where you can enjoy drinking and singing with the locals. Watch the striking fireworks display that lights up the city, before heading downtown where bars and clubs throb until at least 5am.

Getting there: Fly with Iceland Air and Iceland Express. Fares from £490 return.

What: Make a beeline for the Meiji Jingu shrine along with two million other revellers to pray for health and happiness in the year ahead. Shibuya is loaded with hip after-dark haunts – there’s even a countdown to midnight outside the train station, festooned by blinding neon adverts.

Getting there: Fly with Air China, KLM or Air France. From £622 return.

What: The gorgeous palm-fringed beaches of Goa are the place to head for an epic bender at New Year’s Eve. Party for three or four days at Anjuna beach resort, where you’ll find space cakes galore and gorgeous sunrises, as well as the odd sacred cow.

Getting there: Fly with Kingfisher, Qatar and Jet Airways. From £1000 return. 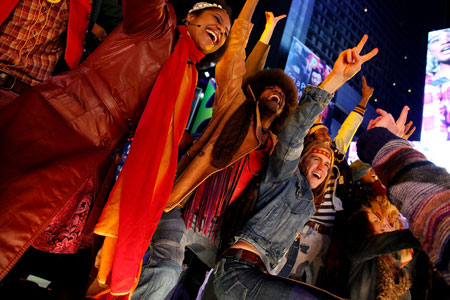 What: One million people converge on Times Square on New Year’s Eve to goggle at the legendary glittering ball drop from the top of One Times Square. Expect pyrotechnics, live music and a charged atmosphere.

Getting there: Fly to New York with Air Canada, Lufthansa, bmi and Continental. Return fares from £565.

What: Costume-clad locals get the fun started early by taking to the streets for drinking and dancing before the clock strikes midnight in the party city of Barcelona. Munch on tapas and knock back sparkling cava until dawn, then grab a breakfast of hot chocolate and churros on the beach before hitting your bed.

Getting there: Fly direct with easyJet. From £240 return.

What: Expect loud techno music and great fireworks throughout the city. Taksim Square and Istiklal Caddesi will be packed with people, including plenty of tourists. Hit the bricks in the Nisantasi neighbuorhood for the street party scene or rock the casbah at clubs Babylon, Nayah and Crystal. Watch out for the sparklers that locals throw about in the streets.

Getting there: Fly with BA, easyJet
or Turkish airlines.

What: A music and fireworks extravaganza can be found on Sydney Harbour Bridge, best enjoyed from one of the boats in the harbour. No need to wrap up warm for NYE Down Under, just bring your shorts and thongs, and plenty of beer.

Getting there: Fly to Sydney with British Airways. From £1500 return.

Getting there: Fly direct with Wizz Air and easyJet. Fares from £187. 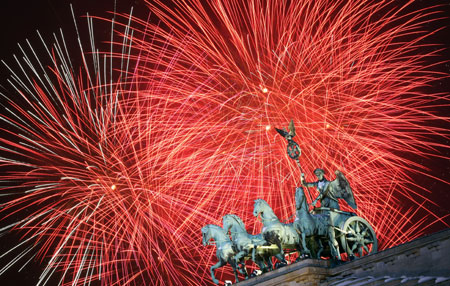 What: More than a million people flock to the Brandenburg Gate for the world’s biggest open-air New Year’s Eve party. Expect tents hosted by superstar DJs and big name bands, laser and light shows, food stands and bars, and an eye-popping fireworks display to welcome in the New Year and best of all, it’s completely free. Wrap up warm as Berlin can chilly.

Getting there: Fly direct with Ryanair and EasyJet. From £167 return.