Interview – Chris Tremlett: Back from injury, the cricketer is doing the hard yards for Surrey in hope of a return to the Ashes stage

Short and sweet aren’t words you’d usually associate with Chris Tremlett, 31, the Surrey quick whose measurements could be mistaken for a door frame and who, while he seems a perfectly amiable bloke when TNT catches him after training at Kia Oval last week, would have no qualms about knocking your block off with a six-stitcher.

But that’s the sad fact about the 6’ 7” paceman’s Test career to date – due to an unlucky run of injuries it stands at a short 11 matches for a sweet 49 wickets.

Such an impressive return at the game’s pinnacle makes his lack of appearances more tragic. But now he’s back at full fitness, charging in for Surrey, part of a 30-man ‘performance squad’ lined up for England action this summer. And while the New Zealand Tests are too soon, he’ll be a massive chance to take part in the Ashes.

“It’s nice to be back playing at this stage,” says Tremlett, who’s been kept out of action by back problems and a knee injury which required surgery.

“I’m working hard. I pulled up well from my first proper game in a while, got through 30 overs feeling pretty good. I’m running at 100 per cent and gaining rhythm and confidence each time I play. If I keep going in this direction, I’d like to have my hat in the ring for the Ashes when they come around.” 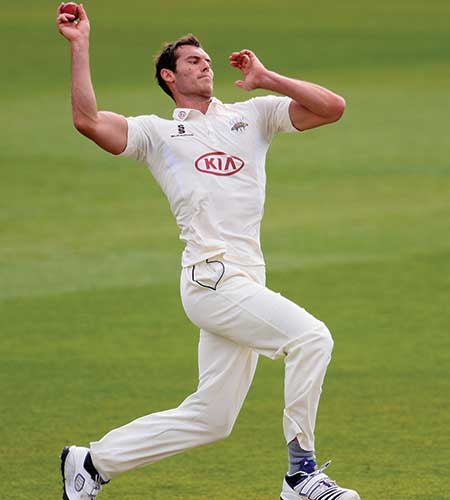 Back in action: Tremlett charges in for Surrey

This won’t be music to Australia’s ears. While Tremlett impressed enough on debut in 2007, replacing injured Matthew Hoggard ably against India, he etched himself into the memory of Aussies on the 2010 Ashes tour. When he got a run in the third Test in pace-friendly Perth, his acute trajectory was an issue for the Aussies as he took 3-63 and 5-87.

“The times I’ve played for England, unfortunately not as often as I’d like due to a lot of injuries, but when I’ve played I’ve never doubted my ability,” he says. No one doubts why. In the following Boxing Day Test in Melbourne, Tremlett tore Ricky Ponting’s side – and the skipper himself – apart.

He took 4-26 (James Anderson also claimed four scalps) to roll Australia for 98. He then took the Test’s final wicket as England embarrassed the hosts by an innings and 157 runs. He calls that “probably the most memorable Test I’ve played in”.

“It’s about building back up to that level again now,” he says. “Even though I’m back, I’m still off the pace so it’s about building up momentum and confidence. If I’m taking wickets, my name’s in the hat and maybe I’ll get picked again.” 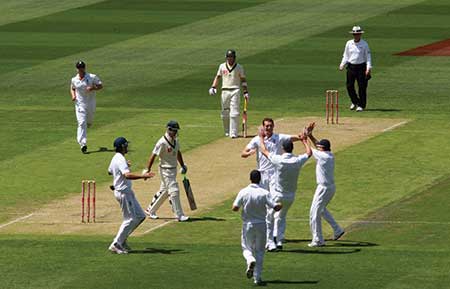 Out: Ponting’s prized Ashes wicked in 2010

In theory, it’s all a fairytale in the making, but Tremlett has come back from injury before and knows the realities of being not just a fast bowler, but a sizeable one. The fact remains he hasn’t played a Test since January 2012.

“Injuries are part and parcel of what we do,” he admits. “If you look at some of the bigger guys, [Andrew] Flintoff etc. have all had injury problems. Some guys get it more than others, unfortunately I’ve had my fair share. It’s what happens when you weigh over 100kg, which I do, and are running in trying to bowl every ball as fast as you can.

“I’ve worked a bit harder on my fitness over the past few years, so am giving myself the best chance to avoid injury. It’s taken a lot of hard work to get back after some major injuries but hopefully that hard work will pay off.”

He knows exactly what Australia’s injury-plagued young quicks who can’t stay on the park must be going through.“It’s tough for them,” he sympathises.

“They play on very hard wickets and certainly when you’re younger your body is still getting into it and growing, so that’s hard to combat.”While many have been quick to discount the Australians and their chances against England, Tremlett isn’t so sure. “England struggled in India for years but really worked on it and got the reward,” he says.

“Australia got comprehensively beaten, but that can happen in those conditions. I wouldn’t take much from it with their new-look squad. Coming to England [there] will be conditions that suit them more. They’re still a force to be reckoned with.”In saying that, though, Tremlett doesn’t see cause for concern for England, who failed to win a Test against eighth-ranked New Zealand.

“They were playing on some pretty flat wickets there, so a lot of hard work,” he says. The Tests starting May 16 against the Black Caps at Lord’s and Headingley will be a better gauge. 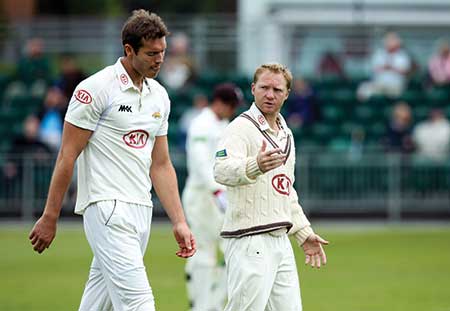 Big slog: back to his mark with some advice from Gareth Batty

For now though, Tremlett’s focused on bowling well for Surrey. His journey back to the Test arena continues this week with a feast of action at the Oval including Yorkshire Bank 40 matches on Monday against Hampshire and Thursday against Durham, then a LV County Championship four-dayer with Durham from Friday.

Surrey will be careful not to overwork the big man too soon, though, and his most prominent role will likely be with a red rather than the white one-day ball.

And while he cuts an imposing figure, he won’t have the pressure of being the crowds’ sole focus of attention with South African captain Graeme Smith leading the side. Then, in June, when Smith’s on international duty, his replacement will be Ricky Ponting, “a legend of the game”, says Tremlett.

“To have Graeme, what he’s achieved and brought to the club already is outstanding,” he says.“Then, Ricky coming in June is pretty special too. We can learn a lot from them both. “I’ve got great memories of getting him out in 2010 but it’ll be nice to have him in the slips taking catches for me.” 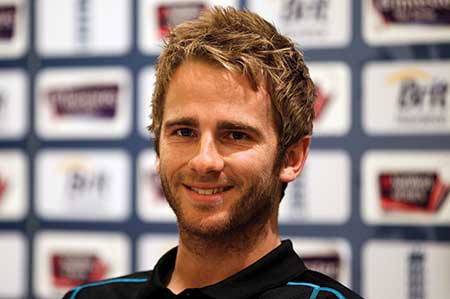 Black caps in England: ‘It’s not an Ashes warm-up’

Were their recent drawn Test series a boxing match, a fair judge would have given it to New Zealand on points, yet they still had to impress that their two-Test series in England is more than an Ashes warm-up.

“These are two hugely important Test matches for us,” Black Caps head coach Mike Hesson told media. “We’re making progress as a Test side and certainly won’t like to be the entrée for the main course.”

His side, awaiting the arrival of captain Brendan McCullum and Ross Taylor from the IPL, are ranked only above Bangladesh in Test nations, but their draw with England shows they can match it with anyone.

Batsman Kane Williamson added: “We’ve got nothing to do with the Ashes. We haven’t looked at it in any way. We’re targeting our preparation [for] the first Test.”