As you would expect from a woman who is juggling a successful acting career with being a mother to two young children, Naomi Watts looks a tad weary as she sits down for a chat. “I haven’t had a full eight hours of sleep in four years!” the Australian actress says with a warm smile. “I can safely say I am a little overwhelmed by it all.”

While her balancing act over the past few years has been enormously tiring, Watts wouldn’t swap the experience for the world. Motherhood and her relationship with fellow actor Liev Schreiber has brought about a kind of happiness and contentment the 43-year-old hankered after for decades.

“I’m happy with the work I’m doing, but being a mother will be my conscious priority for a long time,” she points out. “I feel so rich inside – I feel blessed. For me, it’s been a way of fulfilling a long-buried childhood dream. I had always wanted to be a mother but when I was desperately searching for work in LA after I moved there from Australia, any thoughts of family were very distant indeed and it seemed that it might never happen for me. It’s almost frightening for me to think now that if I hadn’t met Liev, I might never have had children of my own.” 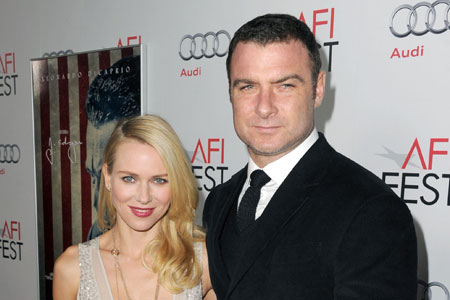 Watts and Schreiber (star of films like X-Men Origins: Wolverine and Salt) started dating in 2005 and it was while working together in China on drama The Painted Veil the next year that they both realised how much they cared for each other.

“We had started dating before doing that film but I think being in China with him was when I realised how much I missed him when he left because he only had a few weeks of shooting on the film,” Watts recalls. “That was probably the moment where we both realised how much we were going to miss each other. But in terms of my work on the film, it was much easier for me to focus on my character once Liev had gone back to New York because it was hard for me to concentrate when he was in China with me.”

Watts admits that by the time she met Schreiber – with who she has two sons Sasha, four, and Kai, three – she had serious doubts over whether she would ever meet Mr Right. “You worry that it is not maybe meant to be and you start doubting whether it was worth working so hard and not leaving that much time for yourself and to be in the position to meet someone and be able to nurture a relationship,” the actress says.

“If you’re doing three films a year, you’re basically living out of a hotel the entire time and your life is whatever you make of it while you’re on a film set. I was also the kind of actress who had fought so long to finally make it that I was always overly anxious about finding the next project and maintaining my career. On top of that, you wonder why you aren’t meeting someone who might be the man to start a family with. I’m glad I’m past all that.” 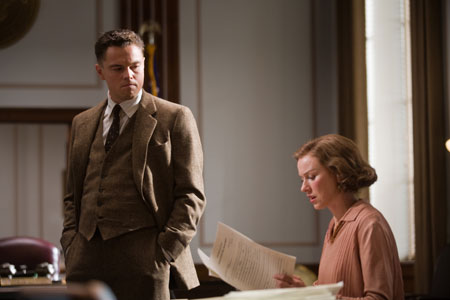 With things going so well with her love life, it takes some special projects to wrench Watts away from domestic bliss. New film J. Edgar more than qualifies (see our J.Edgar review here). Chronicling the life of the notorious first head of the FBI, J. Edgar Hoover, the Oscar-baiting film has a powerhouse director in Clint Eastwood and a sublime cast including Leonardo DiCaprio (as Hoover) and Judi Dench (as Hoover’s domineering mother).

Doing sterling work, Watts plays Helen Gandy, Hoover’s secretary whom he described as “indispensable”. One of the challenges facing the actress was the fact that – with the film spanning the 48 years Hoover ran the FBI – she had to age on screen.

“It was interesting and I think I saw traces of my grandmother and mother,” she says. “I think with Helen, we wanted to make her look elegant, so we were trying to go carefully. The process of the endless hours, sitting in a make-up chair is hard and I’m quite an anxious, fidgety person anyway, so I don’t really like people touching me for too long.”

Watts is far more relaxed when it comes to ageing in real life. Known as a star who refuses to respond to the arrival of crow’s feet with a dash to nearest Botox clinic, the actress is a natural beauty – in more ways than one. “I like to look nice but it is certainly not the ruling thing in my life,” Watts shrugs. “I want my coffee in the morning and if I haven’t had a shower, I’ll still go out. I have always been a five-minute girl.” 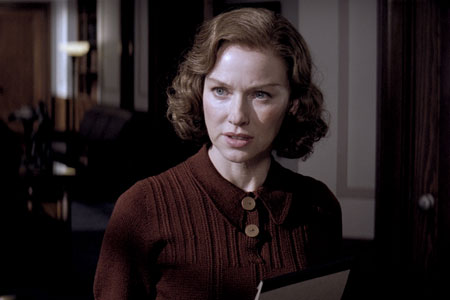 Watts’ no-fuss attitude is an indication that, while she now lives in New York, the actress remains very much an Aussie at heart.
“I feel very Australian,” says Watts, who was born in Kent and moved Down Under when she was 14. “And I feel very English as well. I am a combination of the two.”

Watts swapped Sydney for Los Angeles in the mid-1990s, a move that, initially, looked to be a big mistake as she struggled to make a mark as an actress. The tough years the star spent trying to get a foothold in Hollywood makes Watts all the more grateful for the success she now has, both in her professional and personal life.

“Acting is such an uncertain kind of life,” says the star, who was nominated for an Oscar in 2004 for 21 Grams. “You struggle so much at the beginning of your career – at least I did – and then you suddenly find yourself working all the time and after six or seven years you realise that maybe work and success isn’t everything.

“Meeting Liev was my great fortune in life and now I can enjoy being a mother and still manage to keep working. It’s a busier kind of life, but, in the end, it’s everything I wanted.” ❚

Stephen Merchant interview: Scary women and the humour of disasters