Theatre Review: She Loves Me

Banish winter gloom and start the New Year with this delightful bit of froth by Fiddler on the Roof duo Sheldon Harnick (music) and the late Jerry Bock (lyricist) which, like Travesties (the previous production at this address) is surely destined for a West End transfer.

It’s hard to see how Matthew White’s delightful production (with cheeky choreography from Rebecca Howell) could be bettered – the Budapest perfumery in which it’s predominantly set is chocolate-box pretty, the casting is perfect and this engaging 1963 musical (based on the 1937 Hungarian play Parfumerie by Miklós László which also inspired the American rom-com You’ve got Mail ) sparkles with affectionate humour. 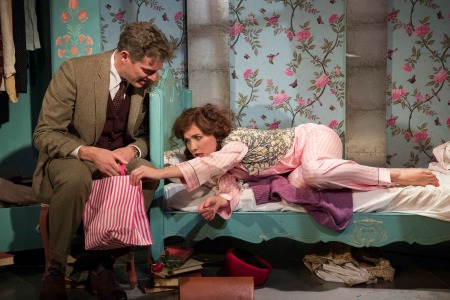 Long-serving clerk Georg has fallen for a woman he’s never met but with whom, thanks to a lonely hearts ad, he’s been exchanging increasingly amorous letters. When super-saleswoman Amalia (who’s also carrying on a romantic correspondence) talks herself into a job in the same establishment, there’s an immediate antagonism, neither of them realising just whom it is they’ve writing to.

It’s a simple enough story, fleshed out with the not-so-clandestine affair of their fellow colleagues (Dominic Tighe’s caddish love-rat and Katherine Kingsley’s superbly cynical  sexpot Ilona) and the contrast between Alastair Brookshaw’s family man Ladislav whose desperate to keep his job and teenage delivery boy Arpad (Callum Howells) equally desperate for promotion. Even the waiter (Cory English) makes a memorable contribution as he fights against the odds to retain the romantic atmosphere in his restaurant.

And as the warring duo who are obviously meant for each other, Mark Umbers and Scarlet Strallen shine – with Umbers getting maximum comedy out of Georg’s predicament when he realises the identity of the woman he’s arranged to meet and a vivacious Strallen trilling prettily in Vanilla Ice Cream, one of many high spots in this gorgeously packaged production.

3 fashion trends we believe will carry on to 2018