First their story was filmed, then made into a stage play and now comes the musical version courtesy of Tim Firth and Take That’s Gary Barlow. The women’s names have been changed, but this now familiar, fact-based tale of community spirit in the face of grief will send you out smiling into the night as the dressing gowns finally come off and, with only the briefest glimpse of a nipple but (to the great relief of Michelle Dotrice’s retired teacher Jessie) absolutely   no “front bottoms” on show, these ladies of a certain age cover the essentials with strategically placed flowers and iced buns for their photoshoot. 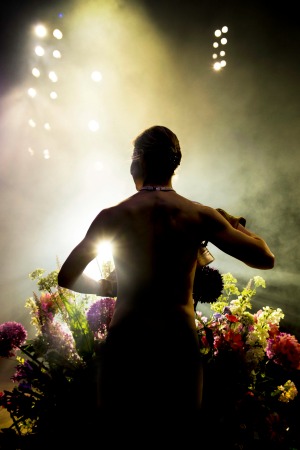 In a female-dominated show, each of the half dozen main characters gets their moment in the spotlight – Sophie-Louise Dann’s surgically enhanced former airhostess Celia admitting “So I’ve Had A Little Work Done,” Claire Machin’s single mum Cora showing her wild side, Debbie Chazen’s put-upon Ruth knocking back the vodka, and Joanna Riding’s bereaved Annie and her best friend of forty years, Claire Moore’s florist Chris who sets the scheme in motion..

The musical numbers aren’t immediately hummable (though a second hearing would probably do the trick) but Riding brings a heartbreaking purity to her solos and, especially after the interval, this is a joyous, life affirming show, liberally sprinkled with witty one-liners and clever lyrics and which even giving the teenagers (including Ben Hunter’s wannabe head boy Danny) a look-in against the green-tinged background of Robert Jones’ hilly kitchen cabinet set.