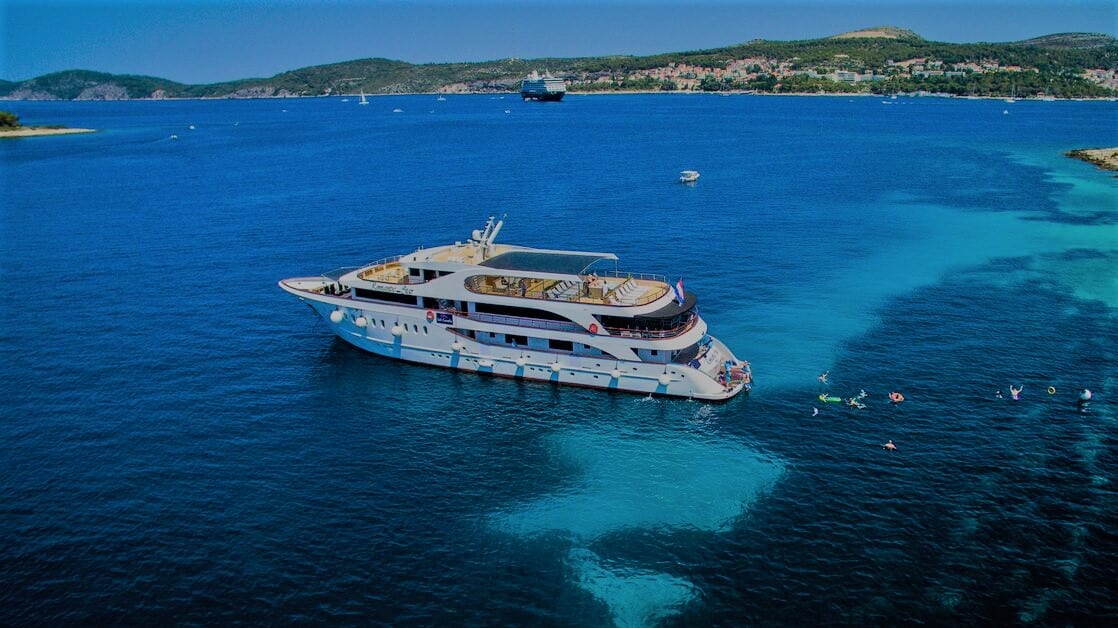 Leading travel writer, Kate Morfoot from Love To Eat To Travel sets sail on a five-star ship with Sail Croatia to discover the Dalmatian coast.

Croatia is steeped in history, having been trampled over by invading armies, thrown into mayhem between empires then split up and put back together again in various different forms. Its ruffled past has led to what is now a dynamic and beautiful country with an economy that’s reaping the benefits of tourism.

The best way to see Croatia is island hopping. Accommodating a maximum of only forty passengers, the new and elegant ‘Romantic Star’ was our home for a week, making our cruise a very intimate and exclusive experience.

The Elegance Premier Plus ships operate under the brand Sail Croatia and are some of the best modern boats sailing the Adriatic which have been specifically built for small ship cruising, perfect for being able to moor in smaller ports and harbours.

Boarding at the port of Split, our journey began with lunch being served in the dining room where you are given the opportunity to meet members of the crew whose job it is to look after you and all the other excited guests who have joined us from all over the world. There were four British couples, the remainder had travelled from Australia, New Zealand, Arizona and Las Vegas. It is holidays such as this where you can make friends for life, share great experiences while cruising to Croatia’s beautiful islands.

Our seven night cruise took us to six islands before returning to mainland Split. Unexpectedly, due to severe storms our route had to be slightly changed. Having missed Bol and the famous Zlanti Rat (Golden Horn) beach due to bad weather we headed straight for the tiny fishing village of Milna which lies to the West of the Island of Brac. It was busy with many yachts and small cruise ships moored up. The restaurant opposite our mooring was a god send cooking fresh oven-fired pizzas which we enjoyed immensely with our friends from the UK. Back on board we listened to the gales outside wondering how the other guests had got on walking further into the village to different restaurants in the raging storm. Couple by couple they returned soaked through not being able to reach their restaurants of choice. The pizzas were a winner that night!

The following day we explored the tiny harbour village with its beautiful church, a fine bakery and lots of small bars around the marina. The gale abated, the warm sun came out and before long we’d all forgotten the storm. We then boarded our boat ready for the trip to Hvar.

Known as the French Rivera of the Adriatic the destination of Hvar has a certain glamour. The Fortica Fortress overhangs the town and super yachts line up in the port. It has good but mostly expensive seafood restaurants and VIP bars where famous people have been spotted including Beyonce and Daniel Craig. Aside from the glitz there are plenty of activities to do in the area including kayaking, sailing and diving.

Planned ‘swim-stops’ en-route to each island provided the opportunity to swim in the sea and experience the crystal clear blue water and the surprisingly warm temperature. (The average summer temperature of the Adriatic is between 22-26 degrees Celsius). Croatia is the perfect holiday destination for watersport and swimming enthusiasts. Sail Croatia organizes and arranges day trips to try kayaking and on many of the islands you can hire jet skis.

On Mljet Island which is one of my favourites there is a beautiful forested National Park where you can swim in either of the two azure natural salt water lakes.

Mjlet National Park covers 5400 hectares of land and sea covering the entire North West of the island. The main centres are Pomena and Polace which are very busy tourist attractions. After a long swim and some sunbathing we hired bicycles and explored the 12km park taking us around the larger lake and stopping en route to take a small ferry boat over to St Mary’s Island where there is a former Benedictine Monastery as well as a restaurant and bar where we enjoyed a welcome drink.

You can’t visit Croatia without visiting Dubrovnik, however, beware that this city is heaving with tourists from all corners of the world not least with the numbers undoubtedly increasing because it provided the location for the filming of The Games of Thrones.

It’s an incredible city and lying within it is the historic compact old town in which you can wander along the marble streets, walk the city walls or take the cable car to get a bird’s eye view of the city and the harbour. Regardless of whether you are visiting Dubrovnik for the first time or the hundredth, the sense of awe never fails to descend on you when you set eyes on the beauty of the Old Town. Although the shelling of Dubrovnik in 1991 horrified the world, the city has bounced back with vigour to enchant visitors again and it has joined the UNESCO list of World Heritage Sites.

Korčula’s is the greenest, most independent and interesting of all Croatia’s 1000 islands. The Greek’s named it their favourite place to holiday over 2000 years ago and today it is most people’s favourite when you mention Croatia.

It is ringed by impressive defences with marble rich streets, one of which is lined with restaurants overlooking the sea many serving fresh fish of the day. It’s a joyful place of happy day trippers and holiday makers coming ashore from their cruise ships, meandering along sea walls and discovering the tiny alleyways filled with shops selling oils and lavender. There’s plenty of history to be found in the town for those who love Renaissance and Gothic architecture. For the adventurers, there is excellent biking and hiking trails further out of town are available and boat taxis to Badja Island which has a 15th Century monastery as well as a naturist beach.

There’s lots of places where you can enjoy cocktails and watch the sun go down, the most famous cocktail bar is Massimo located at the top of a tower under the turrets of the 15th-century Zakerjan Tower in the northern fortification. It’s accessed by stairs, then a ladder. Standard cocktails in lurid colours come to you by lift on a hand operated pulley system while you take in the view. The problem was not so much getting up to the bar but of course getting down afterwards!

We found a restaurant called Cupido serving grilled prawns and chicken skewers which we enjoyed by candle light after the town had been thrust into darkness following a power cut! We drank their famous local white wine pošip, (some say better than many French wines), I agreed. Isn’t it wonderful how on holiday how food and wine tastes so fantastic?

Our final destination before returning to Split was the island of Makraska which has both a port and a beach resort. Here you can take a short walk along the promenade and join holiday makers at the beach. In high summer, Makraska is pretty raucous with many buzzing nightlife spots and beach bars.

Most evenings you are left to explore the islands and to choose your restaurant, however one evening on board you are catered for with the slightly more formal Captain’s Dinner. An excursion to a local farm in Korčula where ‘the best’ macaroni is made for you to enjoy is also included.

Breakfast and a three course lunch is served daily on board, however the coffee and tea making machine is switched off after breakfast and is only available again for one hour later in the morning and again for one hour in the afternoon. Outside these times tea and coffee was available at the bar and had to be paid for. At breakfast time there was an ever increasing slow moving queue of increasingly frustrated caffeine-needy passengers as we all waited patiently for the double expresso to splutter out. On the plus side you did get to know everyone’s life stories!

Our cabin, located on the Upper Deck, was spacious and had a large double bed, lots of space to hang your clothes with a large ensuite bathroom and a shower. Our room was air conditioned and had port holes to see the views.

Romantic Star was built in 2016 so there was a feeling of luxury and newness and everywhere was sparkling clean. The lounge and bar area had white leather sofas with lots of table space in the dining room. Outside, the top and bottom decks there was enough sun loungers at the front and back of the ship. On the top deck we lounged in the outdoor Jacuzzi watching the yachts and ships cruise by and it was a lovely way of relaxing and taking in the views.

Time spent cruising on the boat meant you could relax, sunbathe or chat to your shipmates and delight in what is a super fun holiday. Romantic Star did us proud and cruising Croatia and the emerald seas was all we hoped for and more.

Arriving back in Split, we said goodbye to our friends and the Croatian crew, we spent time exploring the beautiful Old Town and the street-lined markets and the impressive Diocletian Palace built for an Emperor which forms around half the Old Town of Split.

We waved a sad goodbye to Romantic Star, but it won’t be the last visit back to the beautiful Dalmatian islands of Croatia.

Kate Morfoot was a guest of Sail Croatia on the Elegance Cruise Split Return South.

Elegance Cruises run between May and October, departing from either Split or Dubrovnik, and travel north or south through Dalmatia depending on the itinerary. Elegance Cruises include 7 nights’ accommodation in twin-share cabins, a local Tour Manager, a buffet breakfast and 3-course lunch daily, as well as a Captains Dinner with entertainment and a local village experience.

Sail Croatia is currently taking bookings for 2019 departures, with prices starting from £679 per person, in a Lower deck, twin-share cabin.

Visit www.sail-croatia.com for more information, or to request a quote.

You can find all Elegance Cruise prices online here: https://www.sail-croatia.com/croatia-cruises/elegance-cruises 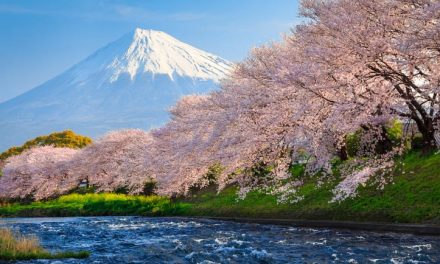 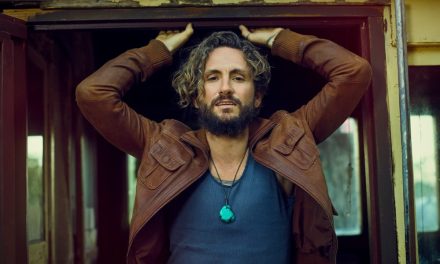 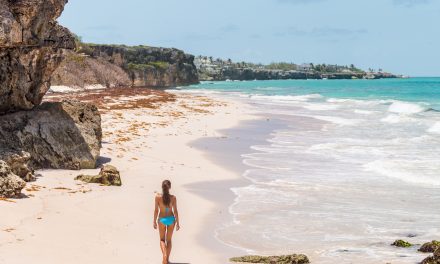 Best of Barbados: beaches, nightlife and other adventures 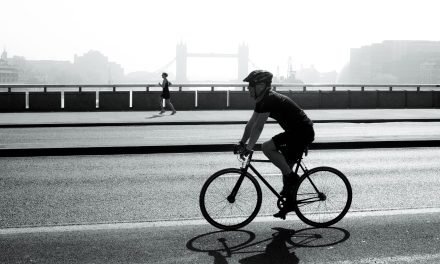