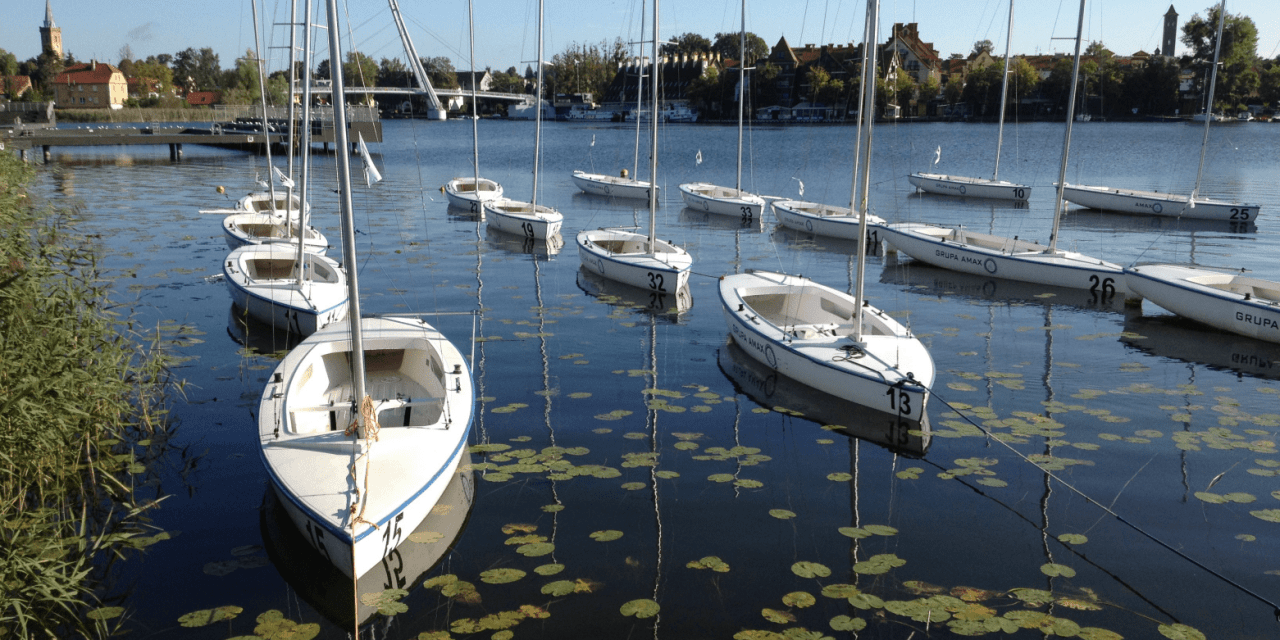 The gentle sound of birdsong is all that I can hear as I drift down the river in my kayak. Life doesn’t get much better than this.

I’m on the Krutynia River in the heart of the Great Masurian Lakes – Poland’s answer to the Lake District – with my friend Jules on a four-day adventure exploring the region. Earlier that day we touched down at Olsytyn-Mazury airport and two hours later here we are out on the water.

It’s hard to get away from the water – it’s everywhere, and the reason why the region has earned the nickname the “land of a thousands lakes”. There are more than 2,000 lakes to be precise, but for the purposes of our short trip we are only visiting two – Lake Mikolajki and Lake Wulpinskie. 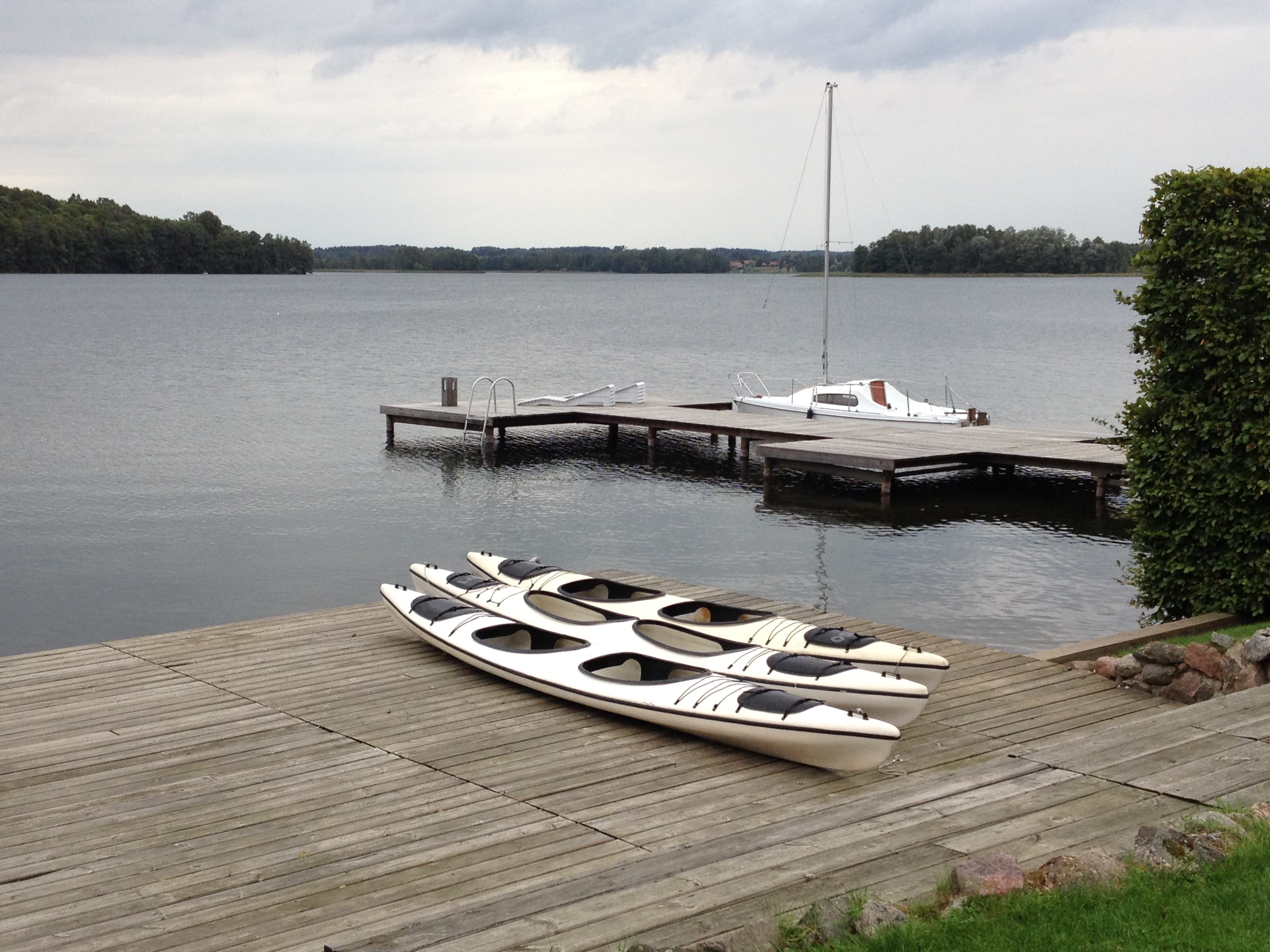 The contrast, however, couldn’t be greater – Mikolajki a bustling hub of restaurants, bars and cafes; Wulpinskie an altogether more sedate affair.

But first back to the river. Dropped off 13 kilometres upstream by two burly Polish lads, all we had was our kayaks, a map in Polish, and our wits to get us to our pick up point on a river bend near the village of Rosocha.

The last time I was in a kayak was bombing down the rapids in the wide canyons of the Ardeche, southern France, Deliverance style, but this was, thankfully, a far gentler proposition. Pushing off from the river bank, we meandered our way downstream, only the gently swaying reeds as companion, occasionally catching glimpse of a heron taking flight as soon as we approached.

Halfway down we came across an old watermill, dating back to the 20th century, where we were met by an elderly man, belying his years by hauling both of our kayaks onto the back of a trailer which he pulled all the way to the other side.

So far we had been taking it at our leisure, but realising it would soon be getting dark, we picked up the pace, making it home in time for a sundowner or two in the marina.

The next morning, after an anxious 10-minute wait for the requisite number of passengers, we caught the ferry to Ryn via the adjoining Lake Talty. Puttering along at a rate of 20 knots, we sat back and watched the yachts and sail boats gliding across the water without a care in the world.

From Ryn we hailed a taxi to the Wolf’s Lair – Hitler’s headquarters in the Second World War. But first we had to endure a white knuckle ride, our driver intent on overtaking at every opportunity.

Arriving in one piece but slightly worse for wear, we instructed our driver to wait as we scampered off into the woods to explore one of the former Nazi regime’s best kept secrets. Hidden in the forest depths were 18 hectares of overgrown, crumbling giant concrete bunkers, originally used as a base for the German advance eastwards in WWII.

Built up to eight metres thick for extra reinforcement against a possible Allied attack, the 80 structures are enclosed within a complex surrounded by barbed wire, artillery batteries, and an extensive minefield (which had thankfully been cleared before our arrival), as well as an emergency airstrip in case Hitler needed to make a quick getaway.

Because of its location, the Russians didn’t discover the site until 27 January 1945, just before the Nazis blew it up as they retreated. However, given their durability, many of bunkers are still standing, albeit with their walls or roofs caved in. 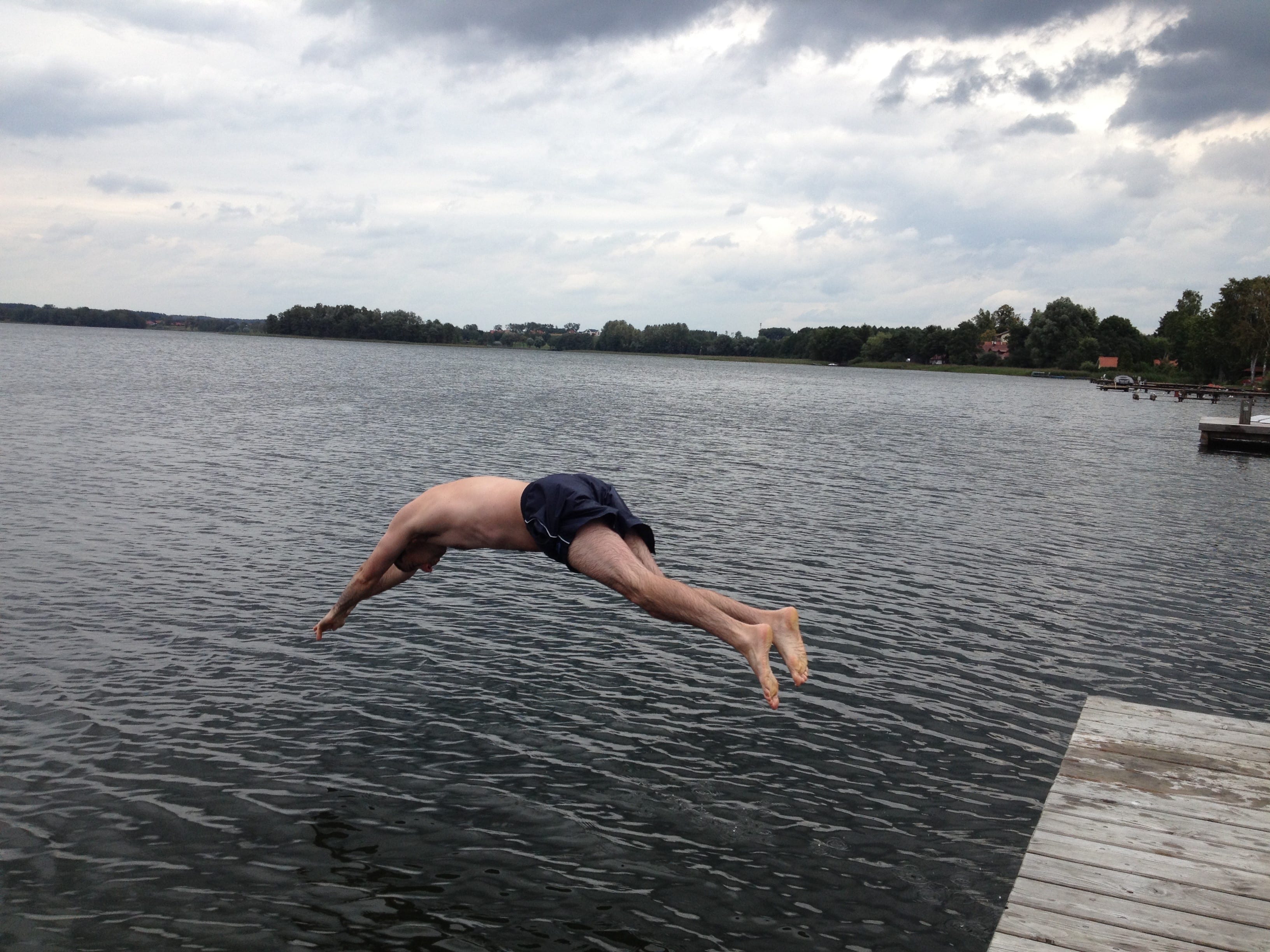 But that’s enough of the history lesson. Today, the site, which, according to reports, was recently seized by bailiffs after the owners failed to pay their rent, has succumbed to Mother Nature, overgrown by a thick wall of moss and shrubbery.

After two hours, though, hunger soon gets the better of us and we head over to the canteen for a hearty bowl of ‘Wolf Soup’, all the while getting cursory glances from our driver stood by his car and puffing furiously on his third pack of cigarettes.

It’s an early start the next day, not helped by the late night antics of a rowdy group of businessmen on a team building weekend the day before. After another a slightly less frenetic car journey (only one near miss) via Olsztyn, the capital of neighbouring Warmia, we’re at the shores of Lake Wulpinskie with just enough time for another kayak ride, this time out to the island in the middle, before a well-earned lunch of Russian dumplings and sour cream.

Then it’s time to take the plunge into the lake’s cold depths. Launching ourselves off the jetty, we swallow half the lake, coming out coughing and spluttering.

Back inside the hotel, sat on our Nordic style ergonomically designed chairs and huddled under a blanket by the fire, hot drink in hand, we shudder again at the sight of ice swimmers braving the lake in pictures on the walls. The cheery owner gives us a knowing nod as he walks by: “Nice swim guys?” he offers.

Heading out onto the lake the next day, this time we opt for a rowing boat and take turns to zig-zag our way across the prevailing headwind, staying close enough to the shore that we can peer into houses and back gardens. We moor up at a smart hotel’s marina on the other side but with a corporate function in full swing and strict dress code, our hopes of getting a drink are dashed. 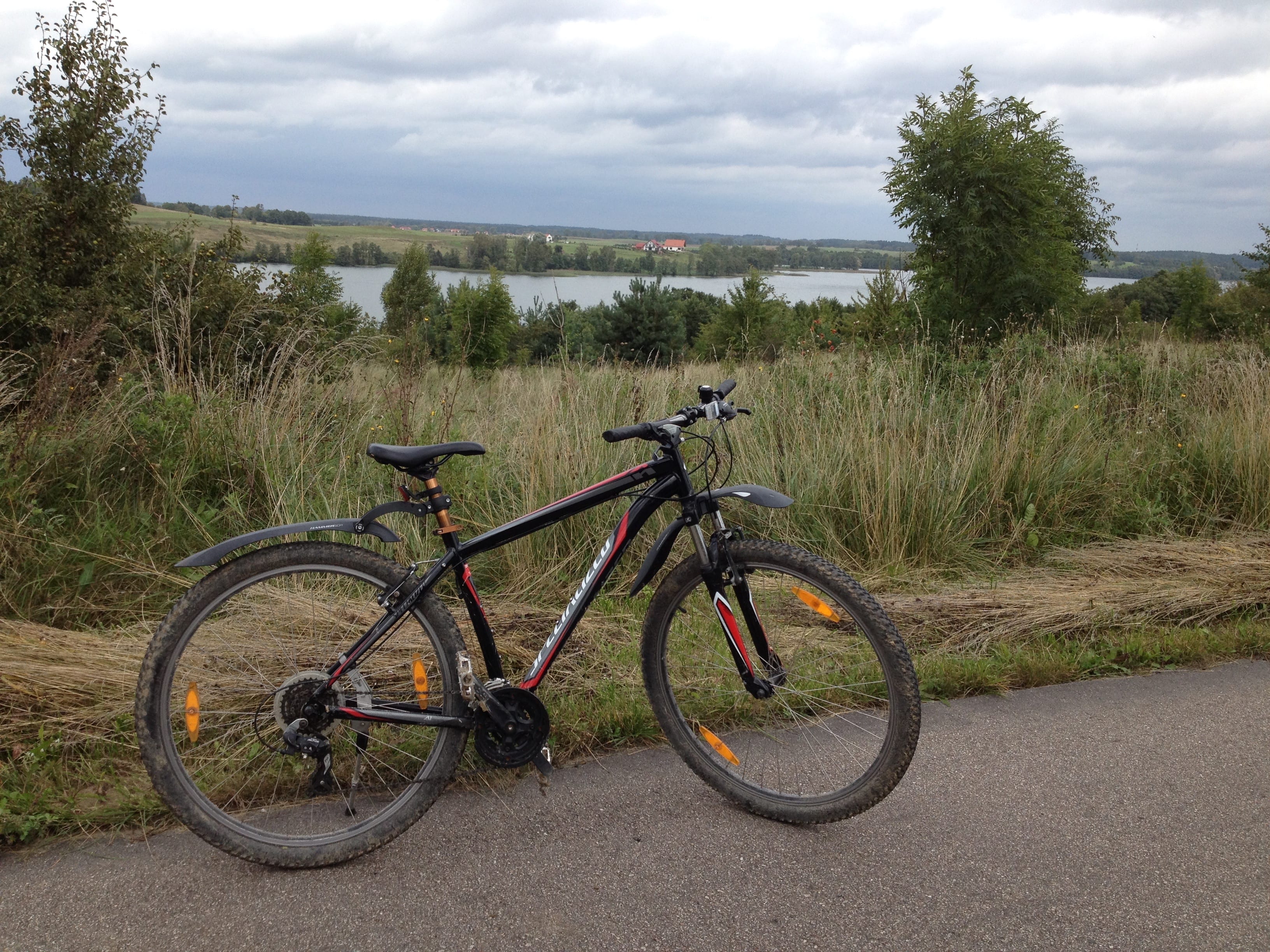 Keen to see another aspect, in the afternoon, we hire a couple of mountain bikes and head out around the lake. It’s not long before we stop in the first village for lunch.

We have the whole place to ourselves and sit out in the beer garden with our bikes, soaking up the midday sun and plotting the final leg of our journey. Suitably refreshed, we head off on a 21km circuit along a road through rural villages and fields that eventually turns into a dirt track.

Halfway along we stop for a breather to take in a view of the lake and reflect on what has been an action-packed few days. Then it’s back to the hotel for a relaxing swim and sauna before sitting back with a glass of wine in hand and the local specialty, pike-perch, to watch the sunset.

Know before you go:

Accommodation: Hotel Galery69 (www.hotelgalery69.pl) offers double rooms from about 300 Polish zloty (£62) per night, including breakfast. There are also single rooms and apartments: rates depend on season and room view. Use of kayaks, rowing boats and bikes is free for the first hour

Attractions: AS-Tours (www.masuria-canoeing.com) rent kayaks on the Krutynia River from 40 zloty (£8) for two hours and offer guided and self-guided tours; Wolf’s Lair (www.wolfsschanze.pl) is 10km east of Ketrzyn and entry is 15 zloty (£3)

More info: Visit www.mazury.travel/en or www.poland.travel to plan your trip 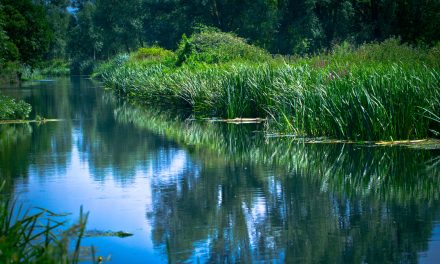 Simple wild escapes from the city 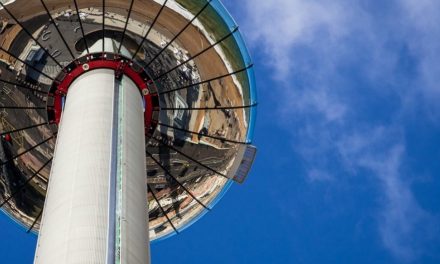