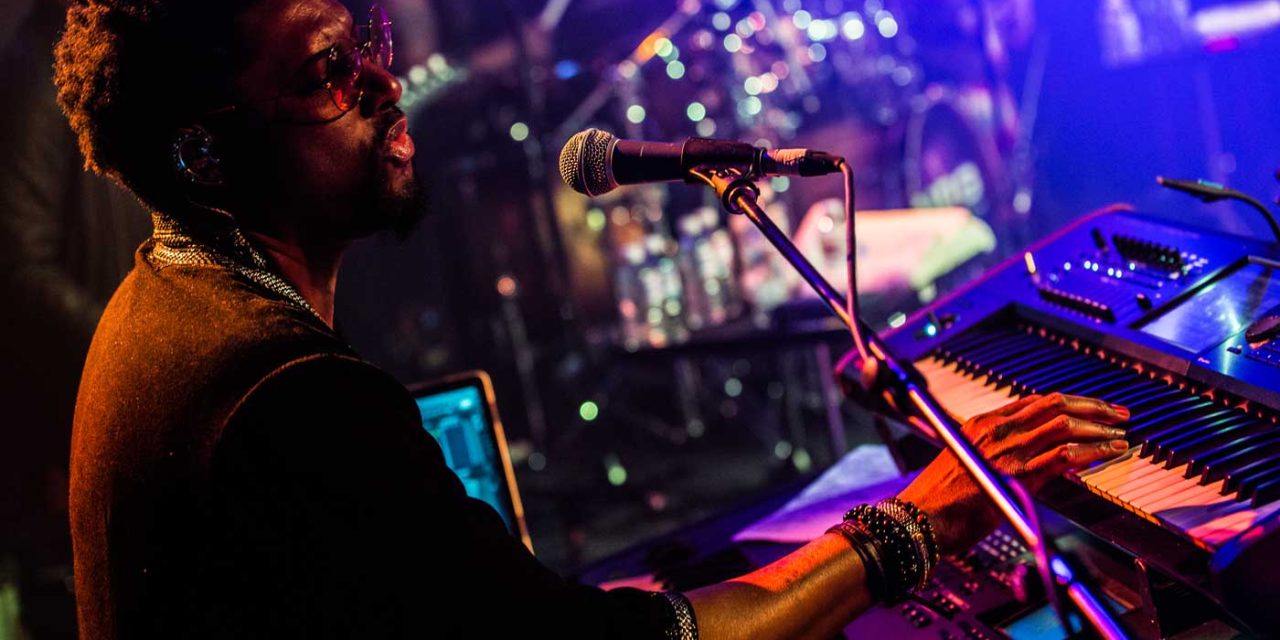 Morris Hayes was Musical Director and longest standing band member to Prince’s band The New Power Generation or The NPG for short. He talks to us about life after Prince’s death and his involvement to some of the most iconic gigs the world has ever seen.

You’ve played some iconic gigs and you must be very proud to have been involved in some of the biggest performances like the Super Bowl, Vegas, Wembley Stadium and also the 21-day stint at the O2 Arena with a sell out 20,000 capacity. What do you look back on with the fondest memory?

This is very difficult to pick out a favourite one with so many performances with Prince over the years. The Super Bowl one was special and my first one at Wembley Stadium with 96,000 people there was kinda crazy! Certain gigs as a musician are kind of the pinnacle of the venues like Carnaby Hall, Maddison Square Gardens, Wembley and the Super Bowl, these were significant performances and something I’m proud to have been a part of. I think the Super Bowl performance kind of stands out as it was so well received and still is cited as one of the best halftime performances in the history of the Super Bowl.

Working with Prince must have been a real roller coaster ride, he’s renowned for his relentless work ethic, and meticulous approach yet totally chaotic and unpredictable at the same time. It must have been hard to maintain working at such an intense level for so long. How did you cope?

Well, you know what, it was more of an acceptance of what I had got myself into. I knew that if I was going to operate at that level, then work had to go into that. You know it was a dream to be able to work with an artist at that level and I always knew that if you made it to the big time as they say, this is what’s going to be required of you’re at the top of the food chain. For me, it was a thing of just making sure that I had the energy to stay in the game.

That was always a big deal for me – to maintain that level and be able to do the job.

I’ve heard that you developed some personas of Prince as a kind of coping mechanism for dealing with that unpredictability.

Over the years I just noticed that Prince was very moody and on different days you would get a different version of him. Over time I would take note of the different personalities I encountered. I counted five of the most distinct and put a label on it. Number one being the kind of Purple Rain Prince and how I knew him when we first met and then having to work with him I realised this guy’s rough. Then there was the happy Prince playing basketball. I went through all of them and gave them a number so when the band was coming around I would say “hey number two is here today, so you better be on your A game!” I would kind of wait and see how he was and know what I was dealing with and that would set the bar for what the day was going to be like.

That sounds reminiscent of an ex-partner of mine, but I think your powers of endurance and coping mechanisms were far better than mine!

You’ve dedicated so much of your life to what was a very privileged role, but what was also let’s face it a bloody difficult one. You were playing at the highest level of music, with all that unpredictability and very demanding situations where you would have had the setlist ripped up at the last minute with no warning and weeks of practice gone out of the window. That must have been exciting, but difficult at the same time. Did you ever think of jacking it all in? Did you ever reach the limit of what you could cope with?

Oh man, absolutely there were many times I just felt like throwing the towel in, and I felt like I couldn’t deal with this Crazy. The pressure would be immense a lot of the time and sometimes I was not happy about the song choices or performances. I always remember something Prince said early on. I was just hanging out and not in the band at this point. I recall sitting in the studio and it was a time when Rosie had just left. He said everybody goes, everybody leaves. I always thought about that I knew I never wanted to quit. My Dad is a great example to me as he was never a quitter. I didn’t want to leave, and whenever Prince made changes of who he wanted to work with, I would always just go with the flow but never quit. Always on call and did what I needed to do.

I think your perseverance will pay off. You’ve set the bar so high and are able to operate at such a high quality under such challenging conditions. I guess this will pay off in how you work in the future?

That’s what you hope, that you take these lessons and you learn from it. I learnt a lot from Prince and I think even moving forward with New Power Generation with our new signer Mackenzie I think we have a really exciting future ahead of us beyond the NPG and Prince music.

You have a reputation to be an incredibly talented band who operate with incredible energy and endurance. You’ve been in an environment where you haven’t had full control of the situation with the controller of that situation being pretty dysfunctional at times. All the tools you have and people around you to make music, must be a really exciting prospect to have creative freedom without the dictatorial approach from Prince?

Absolutely, there’s a lot to take away from what we’ve done in the studio and on stage but we have to operate at a high level because that was our teacher. You definitely want to utilise the skills learned and we’re definitely going to bring that to the performances we do. We’re heading back to the O2 where we did that history-making set of concerts. You know Michael Jackson would have broken the record had he played on, but I think we’ve kept that record and played at the O2 for the longest amount of time. Just to go back with this crew, we’re really looking forward to being back in that venue and doing these shows again.

Is it good to be back together with your old crew from NPG?

It’s good because that’s the band I started off with back in 1992, people like Tommy Barbarella, Sonny T, Tony Damon and Kirk. It’s great to be with those guys again. The thing with NPG is that there were so many people over the 20 years it would be impossible to work everyone into it.

You must have ticked a load of things off your bucket list and possibly things you never imagined were possible along the way too. Is there anything left?

Can you tell me a bit about your project the World Symphony for Peace?

I was living in China for 6 months and just going there I had some preconceptions on what it would be like and when I was there it was nothing like that. Just connecting with people I discovered there’s lot more to life that connects people than not. I just wanted to use a musical platform as a method to talk about peace and bring an understanding between nations and people. That’s the key thing to use music as a platform to connect people. It’s just a way to bring people together, we’re going to be making a film and we’re raising the $2m we need to create the film. We’ve been doing living room concerts around the world and in America. It’s just a great platform. We are bringing artists together all around the world. The girl we have collaborated within China is an incredible musician and has a huge following of millions of people.

An interview with Mark Schwarzer