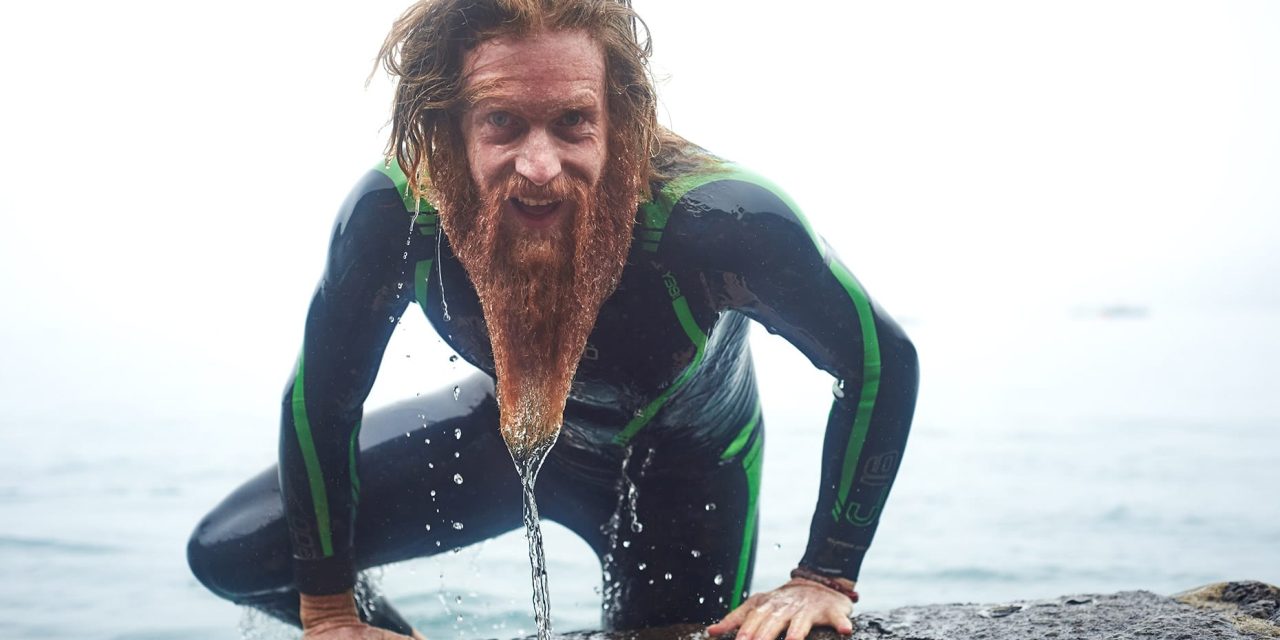 If you tend to suffer from an inferiority complex then read no further as this man is about to make to feel worse. Even Superman looks like a total wimp compared to him! Sean Conway is one of the most extreme yet down to earth people we’ve ever met.

Apparently, he’s been checked out medically and is made of the same stuff as you and I. I’m not sure this is really true as Sean is possibly one of the most hardcore endurance athletes on the planet who laughs in the face of a challenge and then promptly devours it for breakfast. To give you an example of Sean’s superhuman exploits here are some of his achievements so far –

After a failed first attempt he eventually succeeded in cycling the 3890 mile route from Portugal to Russia in 24 days, 18 hours and 39 minutes.

On the 1st April 2016 he set of on a 4200 mile triathlon around the coast of Great Britain. He describes it as the toughest 85 days of his life as he attempted the entire feat completely self-supported. To put this into perspective that’s a 3,350 mile cycle ride from Lulworth Cove to Scarborough via the beautiful yet physically unforgiving Welsh and Scottish coastlines and on a bike made of bamboo. At Scarborough, Sean swapped his bike for running shoes and took 1.5 million steps to Brighton, where he began his final leg – a 390,000 stroke swim, across two intensive weeks, all the way back to where he started using a homemade raft to carry his stuff. A total trip of 4200 miles…

Swimming the length of Britain was a challenge that many thought impossible. Sean disagreed and spent 4.5 months at sea proving it could be done. This is was with a massive 3-mile swim in a local pool as preparation! He even grew his beard to shield himself against jellyfish.

You might now get the impression that Sean is up for pretty much any sort of challenge however mental it might sound to us mear humans. This is a mere introduction to Sean, his list of achievements is staggering! Here’s some more highlights –

He’s got the world record sailing the length of Britain, despite being seasick for 50 of the 80 odd hours trip. His round the world cycle record attempt was only scuppered by getting run over by a car! He completed the Three peaks cycle challenge (yep that’s climbing all three of the highest peaks in the UK whilst cycling 420 miles in between all in 60 hours…) He’s even climbed Kilimanjaro dressed as a penguin and competed in the Gloucestershire Cheese Rolling Competition.

I caught up with the man himself to find out more about how he does it!

How you would introduce yourself to people unfamiliar with you?

Ha, I would just say I’m Sean! But people introduce me as an endurance adventurer. In the world of adventure, I’m at the far end of the spectrum when it comes to endurance and sports.

When did you first get your thirst for adventure?

I always had a thirst for adventure as a kid, but kind of lost my way in my twenties. It was only when I cycled from lands end to John O Groats in 2008 that I fell in love with firstly that route as it’s a journey I’ve now done many many times. But also gave me a bit of belief in myself in my ability. Immediately afterwards I completely forgot about it for another three years until 2011 when I really did chuck it all in and sold my business for a pound and decided to try and cycle around the world the fastest. So I guess it’s that combination of things of how I ended up where I am.

It’s quite a big step to go from “I’m going to challenge myself with a long bike rides” to “I’m going start smashing world records”  What motivated you to take things that stage further?

You’ve got some pretty superhuman powers of endurance. You push your body through to levels which most people wouldn’t imagine was feasible. How did you find those powers? or How did you get to that level?

Everybody has those powers, I’m no different and that’s scientifically proven! I’ve actually been to a lab and been tested and I’m exactly the same as anyone else! I’m bang in the middle. I happen to be a good weight, and a good height (I’m quite short) and lots of these things are luck really which allow me to do a little better than some other people. But for the most part, I’m exactly the same as everyone else.

It’s only when you push yourself a little bit you realise oh you can do that, and just try harder, try harder.

Now it’s been ten years now that I’ve been doing this. Ten years of constantly pushing yourself harder you get to the point where you kind of feel like you can pretty much do anything, which is a wonderful feeling.

You do lots of motivational talks and inspire many people through them, but what do you wish you were told when you were younger?

I’ve got a couple! One is don’t just do what you think you should be doing in life. I also wish I’d had social media to see all these people that were probably doing all the things I’m doing back then but you didn’t hear about them unless you listened to the radio all day or read newspapers or magazines. I wish people had shown me what my potential was back then.

I guess some people did try, my school was pretty good at pushing people, but perhaps I lacked the self-belief. It’s quite hard as a youngster not to listen to other people. I wish someone had told me how hard it would be as well. I don’t want to make it too light-hearted, because when you go to achieve these things they really are quite difficult! I’m just as much to blame as all these millennials now, in that I had a short attention span when I was a kid. I didn’t really stick at stuff, and then never really got the reward. I wish I’d learnt those lessons really.

Who inspired you or still inspires you to push harder?

Loads of people to be honest! Some of the old school guys, people like Tommy Godwin, There’s two of them really. One guy who did the most number of miles in a year of over 75,000 miles in 1939. That record held until right up to a couple of years ago.

Tommy Godwin is certainly one of the guys when I re-read his statistics always makes me realise how far behind we are these days compared to some of the old-school guys.

You’ve explored lots of the world so far. What are some of your favourite locations?

I really enjoy the desert, there’s something about deserts with the solitude, harshness, and the rewards when you achieve them. The Atacama desert was pretty cool, the Namibian desert those two are some of my favourite places to be in.

What’s one of the craziest things that have happened on your travels?

I guess you would have been on your own then too making the implications quite serious!

Yeah, there was no support team!

When you’re out on your expeditions, what is some of the essential and non-essential kit you take with you?

I don’t really have any essential kit other than maps, navigation and stuff like that. I always try to take a mascot. When I did the across Europe world record this year, I managed to find a bit of roadkill in Spain in the form of a well… I think it’s a dog, but in my mind it was a wolf. So I picked up the in inverted comma’s wolfs skull, I tied it to my handlebars and called it Pedro and cycled another 2500 miles with him. We had great conversations! Essentials would definitely be some kind of mascot.

Talking of the solitude, do you enjoy the solitude or prefer to attempt things with other people? I know from the swimming side of your challenges you had accompaniment.

Can you disclose it? Does it even exist?

Oh yeah it exists. I’ve got them all written down in a little black book. I keep writing and adding to it.

I’m getting married, and then I would like to do something with my wife. She’s pretty sporty and perhaps some sort of mixed doubles/tandem adventure.

Sean is a huge inspiration to anyone striving to push a little harder. Since speaking to him, I’ve found myself channelling my inner “sean” and putting in a little bit more effort or going a few more miles further on a cycle especially when the elements are against me.

You can find out more about Sean and buy some of his inspiring books on his website which is well worth checking out!

Interview: Steve Hughes on heavy metal, weed and laughing from your balls