A loud croak erupts through the dark, there’s an oily smell of animal fur in the air, and the buzzing and clicking of insects is relentless. Something rustles in the branches above my head but, as I look up, a firefly dances past and blinds me with an electric flicker of light. Then I hear it: a long, low groan from somewhere deep in jungle. Frozen to the spot, I hear it again. Louder this time; almost like a roar.

I’m in Khao Sok National Park, the largest patch of virgin evergreen forest in southern Thailand. Older and more bio-diverse than the Amazon, this 460-square-mile wildlife haven is home to everything from mouse deer and marbled cats to flying lizards, king cobras and rare Asian tigers.

With my imagination running wild, I turn around and race back along the path towards the glow of the campfire at my jungle lodge. I’ve only been here for a few hours and I’ve already had my first taste of jungle trekking.

I’m staying at one of several eco-tourism retreats in the park. A collection of stilted huts set in a clearing by the River Sok, guests here at Anurak Lodge spend their days exploring the forest and canoeing along the river to local villages and bat-filled caves. You can also hire bikes, join Thai cooking classes and explore the lodge’s own waymarked hiking track without a guide – even, as I did, at night.

Flying into Phuket a few days earlier, my trip to southern Thailand had begun by the beach. I’d enjoyed some sublime pool swims and morning strolls on the sand but, visiting in October at the tail end of the Monsoon season, afternoon downpours had put a dampener on things. Rather than sit in a bar and wait for the sun, I’d headed two hours north to the jungle instead.

As I neared the national park, Khao Sok’s legendary limestone scenery had me pinned to the taxi window. The tallest mountains towered 900 metres above the road, and emerald-green foliage clung to all but the sheerest of cliff-faces. Beneath them, gaping caves and plunging valleys were filled with thick white mist that looked as if someone had poured in a vat of dry ice.

Khao Sok’s karst peaks were caused by a series of geological and tectonic events that began hundreds of millions of years ago. Deep in the reserve at Cheow Lan Lake, 64 square miles of water are studded with more than 100 of these limestone monoliths. The overall effect is similar to Halong Bay in Vietnam except that, here in Khao Sok, the peaks are three times as tall.

From my lodge, this mountainous skyline was breathtaking – I spent countless hours sitting on various viewing decks and gazing at a chain of peaks that zigzagged across the horizon like an erratic reading on a heart monitor. Down on the jungle floor the terrain is a similar rollercoaster-ride of ups and downs, as I discovered during a guided hike on my first day.

After driving a few miles through the forest to reach the main trekking trails, I followed my guide, Nin, along a rust-coloured mud track. At this time of year, the forest is at its lushest and, having rained in the night, it was as if a team of cleaners had been in and buffed everything to a brilliant shine: polished palm leaves gleamed in golden shafts of sunlight, dewed spider webs glistened beside the path and flowing streams sparkled as they sloshed through the green.

As we walked, the smell of jungle foliage filled the humid air, like a mixture of freshly cut grass and sliced cucumber. Butterflies danced around our ankles, birdsong rained down from the canopy and scarlet-red flowers blushed in the undergrowth. Above us, towering bamboo stems arced across the path – several different species grow in this jungle and this particular type, known as ‘monastery bamboo’, creates celestial-like arches over the pathways. 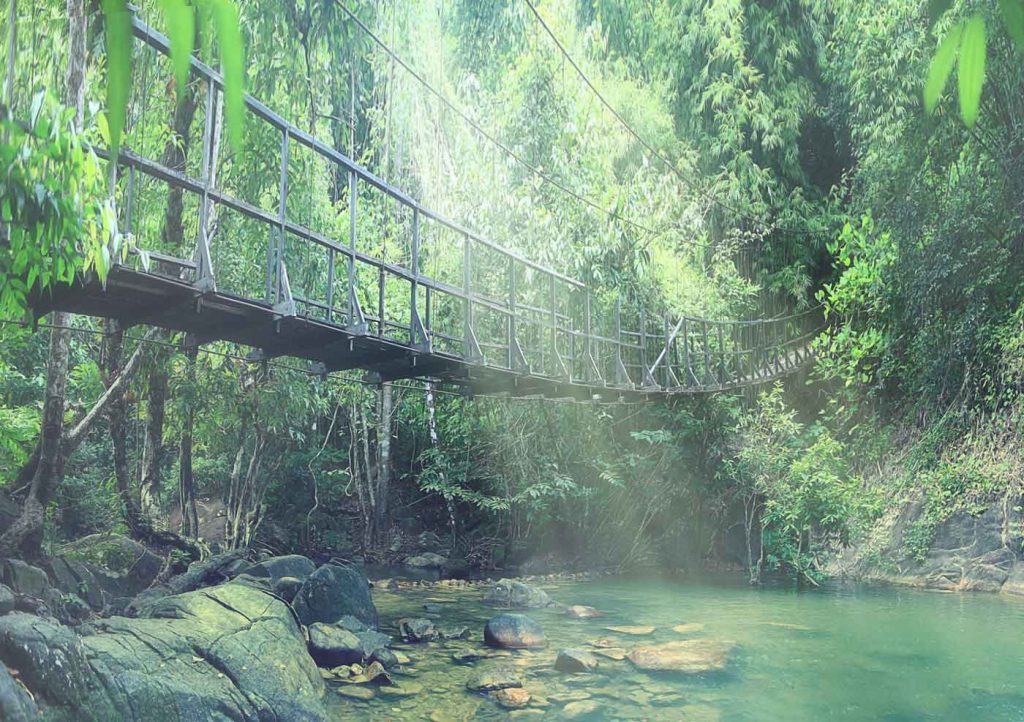 “Monkeys and gibbons use them to cross the track,” Nin explained and, as if on cue, a spectacled languor, with white rims around its eyes like glasses, scampered over our heads along a bamboo bridge and let out a cackle. “He eats the shoots,” Nin pointed to the monkey who was now busily ripping the fibres off a ruler-sized stick of young bamboo and tossing the litter to the floor.

Leaving the languor to enjoy his lunch, we detoured off the main track and picked our way down a narrow path that was fringed by spikey-teethed succulents. As I clambered over head-high buttress roots and ducked under plaited lianas, I saw claw marks scratched into tree trunks and hoof shapes imprinted in the mud – probably the tracks of a wild boar or barking deer.

“Golden web spider,” Nin whispered, pointing to a fist-sized arachnid that was dangling at eye-level in a golden-hewed web. “Blood-sucking leech,” he stated when I crouched down to where a thin worm was wriggling in the red earth. It appeared that bigger game was evading us but Nin confirmed that everything from wild elephants to sloths and civit cats could be watching us from their daytime hideouts.

As we continued over slippery, hippo-sized boulders, I could hear a river raging up ahead. Here in Surat Thani – one of Thailand’s wettest provinces – Khao Sok sees around 3,500mm of rainfall each year. The June to October wet season is the best time to come for wild rivers and verdant vegetation but every season has its appeal: between March and May, the canopy provides welcome shade from Thailand’s searing sun and, in the November to February dry season, the hiking tracks are at their best and the gigantic Rafflesia flower (one of the world’s largest) comes into bloom.

When we reached the river, a waterfall was powering over a limestone rock face and sending up a spray of mist that dampened my cheeks. Come November, when the water levels have gone down, you can bathe here in natural swimming pools. Right now, with fast currents swirling past, I made do with dipping my toes in the minty-green waters – wonderfully refreshing after two hours of hiking along steep and slippery paths.

Back at the lodge that evening I chatted excitedly to the other guests about my trek and listened as they shared their own stories. One couple had been on a canoe trip and seen dinosaur-like monitor lizards lurking by the banks; a family of three had hand-fed an elephant at a local conservation centre; and another guest had just arrived back from a day trip to Cheow Lan Lake.

Before going to bed that evening I sat in my pyjamas on my hut’s private viewing deck and listened to the distant whooping of gibbons, the gentle pitter-patter of raindrops on palm leaves, and the constant background din of a million different mini-beasts. One thing’s for sure I thought, as I went inside and drifted off to the sounds of the jungle: at this time of year, Khao Sok certainly beats the beach.

Writer Lucy Grewcock visited Khao Sok and travelled around Thailand on ten-day trip organised by The Holiday Place (holidayplace.co.uk), who can arrange personalised itineraries with flights, accommodation and activities for all budgets.

A Tale of two Surfers Down Under 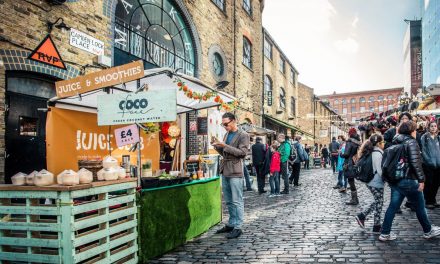 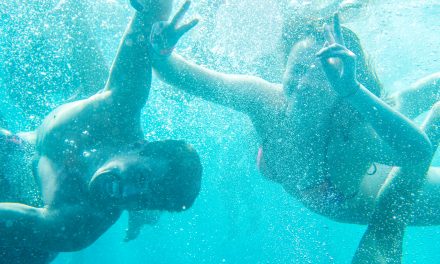