Adelaide to Perth: Plain wild driving across the Nullarbor

Travelling on my own, I’ve always loved the fact that everything I see is mine. While you’re backpacking, you get to do amazing and unexpected things, you see sights that affect you in ways you never thought possible – and the best thing is, it’s all yours.

You can show your family the photos, you can send your mates the emails, but they’ll never know about the tiny, uninhabited moonlit beach, or the golden sunsets over the rolling, enchanting, Outback.

This was the travelling claptrap running through my mind as we pulled out of Adelaide on the tour bus. We had a good size group, but really I was wondering if a 10-day roadtrip, mostly through the Outback, might actually be a tiny bit boring. I couldn’t have been more wrong.

First stop was in the Southern Flinders Ranges for a camel trek around Devils Peak. I had thought I didn’t like camels – they look grumpier than Victor Meldrew when everyone’s forgotten his birthday. Yet they are surprisingly passive mammals, offering a smooth and comfy ride. In other words I had a darn good humping. Then we tucked into some gorgeous bush tucker.

Crawling west across the huge Eyre Peninsula to a soundtrack of soft rock, the world turns into one huge wheat field, countless covers of gold shivering in the wind. It’s really beautiful.

Our overnight camp was on the edge of the Gawler Ranges and we got there just in time for a wonderful sunset, seen from atop Mount Wudinna – second only in size to Uluru.

By the time our tents were up and we’d tucked into a couple of beers, it seemed like the middle of the night. I always forget that about camping – your body clock changes, going to bed and getting up earlier. It’s unnaturally natural.

Up early, we took a small fishing boat onto the choppy waters for a trip I’ll never forget. At the trip of Baird Bay, Australian sea lions and dolphins make the most of the food-rich waters and we were going for a dip with them.

I’m as excited as a kid who’s got new sneakers and wants to wear them home. They may look like giant slugs, but I love seals. I’d snorkelled with them in New Zealand, but this was even better.

While we’re wearing wetsuits that make whales look slim, our guide and sea lion expert is wearing a pair of Speedos that would embarrass a German. Forcing aside any worries about the “s” word (as in sharks), we dived in excitedly.

I immediately swallowed several gallons of water. And had to come back up, burping uncontrollably. Composing myself, I went down for another look. There were at least three sea lions just cruising around, looking for playmates.

So I tagged along with a little one, who glanced at me, took a casual interest, and then went off to play with someone who could actually swim. But slowly I got the hang of it. (Burp.)

I lowered myself to the sea floor while a little sea lion blew bubbles at me. So I blew some back. And he did the same. It was amazing. Like communicating with an alien.

Then I let out a horrendous burp, swallowed more water and shot back upwards, arms and legs flailing, not unlike a drunken Charlie Chaplin. I tried again, this time rising gracefully and slowly, in face-to-face tandem with my new best friend. 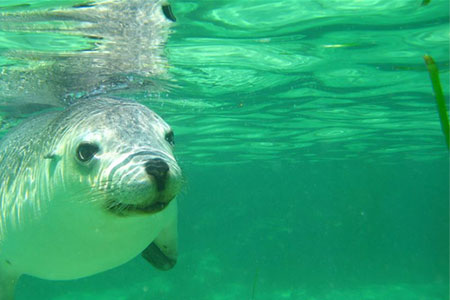 After a prolonged session of rolling, flipping, clapping and hooting underwater (I had to keep them entertained), I returned to the boat exhausted and exhilarated.

We stayed as the very homely Coodlie Park, near Port Kenny. It’s a cracking spot. The 200-acre property feels like miles from anywhere, with wildlife bounding about all over the place and cute private beaches, where we find pocketfuls of fascinating little shells and fossils.

Back at the farmstay I’m introduced to an elderly couple – full of stories – who came to stay for one night; four months ago.

After a hearty barbecue, “Hassie” – the infectious, larger-than-life owner with Steve Irwin hair – takes me “spotlighting”.

We spot tonnes of kangaroos out grazing in the dark and wombats. They freeze when caught in our ray of light. The next morning we hit the road, but soon stop to surf (or at least do a few belly-flops).

While trying to catch my breath, I look around and gawp at the postcard-perfect, unspoilt environment – huge sand dunes, beautiful isolated beaches, the piercingly blue sea… we are the only ones at this special spot.

As we started to leave civilisation and made our way to the real Outback under a cloudless sky, we rolled into Fowlers Bay, a tiny settlement on the edge of the world, surrounded by a mini desert.

After a quick chat with the long-eared camp owner, we took to the dunes for some late afternoon sandboarding. Then it was definitely beer o’clock.

The next day, we moved into the real bush, crossing the famous dog fence and into the Yalata Aboriginal lands. We then crossed into the Nullarbor Plain, stopping to stand slack-jawed at the incredible Nullarbor cliffs, dropping suddenly into the Southern Ocean.

Nullarbor is derived from “nullus arbor”, latin for “no trees”. The vast area is roughly triangular, covering about 250,000 sq km, consisting of limestone from an ancient seabed.

Limestone is so porous, water seeps straight through into huge underground water systems, making it impossible for topsoil to form, hence no real tree growth.

Southern right whales come here during the winter. No whales were there, but this spot is something special – it’s right up there with anything else I have seen in Oz.

The miles turn into a blur. Endless grey-green scrub. The original, unsealed track running alongside the road. The odd wombat hole. Road kill. Handing over our fresh fruit at the WA border.

Stopping at Eucla National Park to check out the historical, abandoned telegraph station half-buried by creeping sand dunes. Trying to find the toilet in the dark.

We’re travelling through classic Outback country. At night, I’m amazed by the sunset over the endless desert. The following day we turn off the road and headed west, watched by big red kangaroos lounging in the scarce shade, scampering blue-tongued lizards and an abundance of wedge-tailed eagles soaring high.

We followed the coast down to Cape Le Grand National Park. After all we’d seen, I wasn’t ready for this.

Our camp at Lucky Bay opens onto a cobalt blue ocean and curving salt-white beach, with rising green slopes and scattered granite boulders on either side.

After two days without a shower I didn’t wait for an invitation. The water was freezing, but fantastic.

We spent two days playing cricket on the beach, bushwalking along the wild and brilliant coastline, meeting kangaroos and snakes on the beach and laughing at my own bad jokes after too many tinnies round the fire.

I even had a go at fishing – but only succeeded in hooking myself, feeding the seagulls and dropping the hand rail in the waves.

If you’re looking for a WA trip away from the crowds, the breathtaking Cape Le Grand is the money shot.

Too soon again we were on the bus, heading for Albany with a magnificent walk at Bluff Knoll in the Stirling Ranges. From there, the landscape changed dramatically as we headed into the heart of the southern eucalypt forests of Western Australia.

We visit Frenchman’s Bay, and walk the tree top walk at the “Valley of the Giants” and climb one of the giant Karri trees that once used as a fire lookout. Feck, it’s high.

Next morning we headed into Giants Cave – with head gear on that didn’t do a lot for me and as we pushed our way through the gaps in the cave structure… all of a sudden that head gear on
my head became pretty useful.

Margaret River awaits, but it’s a bit early for a wine, so we stop and sample the cheese factory, and then the chocolate factory.

We call into an aboriginal culture centre and learn about the dream time and then all that was left was the road into Perth, travelling through the gorgeous rolling countryside, lit by a golden green afternoon.

There was a clear sense of collective reluctance to get off the tour bus. You could sense the group really didn’t want the adventure to end…

The damage & the details: 10-day trips from Adelaide to Perth with Nullarbor Traveller (Freephone: 1800 816 858) cost from $1,495; trips from Perth to Adelaide include the option of swimming with bluefin tuna and cage diving with great white sharks.

Event: The London Project – an innovative National Trust initiative on until June 9