To tell the truth, I’m still recovering from the last time I had an encounter with creatures in the wild. At dusk, on a stiflingly hot evening, I was strolling along at the juncture of park and woodland, when I heard some rustling in the undergrowth. Before I even got a chance to peek in that direction, a screaming, stark bollock naked teenage couple raced past me, with all the bits you don’t want to see bobbing about, bobbing about. Now, rather than getting an unwanted eyeful, I’m on the lookout for the glance of a surreptitious eyeball.

Yes, here I am on a jumping crocodile cruise, on Northern Territory’s Adelaide River. A scenic 60 kilometres drive from the principle city in this state, Darwin, this murky blue-brown stretch of waterway curls northwards from Litchfield National Park to Clarence Strait, as if it were a lazing sidewinder. Earlier, we had had a safety briefing about stuff not to do once we got into our boat – a barge-type thing with an air conditioned wooden deck surrounded by a few protective bars that reach up to just above waist level, which did not impede our view.

Of course, the monsters of the deep we had come to see can’t read, but we were told not to stick any parts of our bodies over the side otherwise we would be spelling out dinner! And going for a little skinny dip was even more out of the question. Well, not unless that hari kari ninja inside of you wants to get-up-close and personal with the 80,000 or so saltwater crocodiles (Crocodylus porosus) that are said to inhabit this region of the country.

Dawn of the dead

We chug up stream, waiting in anticipation of spotting an animal whose various species kill hundreds of people globally, each year. Yet, the mass of aqua in front of us is dead quiet and I think to myself, I’ve seen more life and vitality in an old people’s home. Even so, tracts of deciduous forest, mangrove trees with sepia coloured roots that are more of a tangle than the hair of Medusa and delicate china-pretty water lilies, make this place decidedly enchanting. But suddenly, a sixth sense I never even knew I had kicks in, and peering out of our vessel I notice a triangular-shaped, olive-mud shaded head, which has got small coin-thick ridges at the back of it (osteoderms, kind of pieces of bony armour that sit in the skin). And then, there’s the scariest thing of all, the myriad of sandy, dark green and ebony coloured spots surrounding a diamond aperture, that amount to this apex predator’s lifeless eye. Nicknamed salties, the saltwater crocodile in front of us is just as likely to be found in freshwater, and that eponymous species of croc is also found in this milieu. 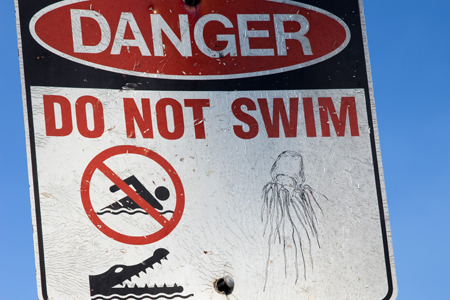 It’s not long before another one of these gangly-toothed, opportunistic carnivores (globally, their diet includes bats, birds, dingoes, goannas, kangaroos, wild boar, and even sharks) sticks its muzzle above the interminable darkness. And then, there’s another. One would figure, at this moment, the late ‘Crocodile Hunter’, Steve Irwin, would get a seismic hard-on. However, our captain begins to droop, as in making our ship speed flag until we come to a complete halt.

Next minute, the crew hang chunks of pork via a long pole over the river. Quicker than it would take a Catholic priest who’s been rumbled to bolt from a gay sauna, the glare of a crocodile’s white scaly belly announce it’s propelling itself out of the water. Momentarily, it’s as if he’s on stilts, his teeth envelop flesh, and down it goes.

Yet, don’t be fooled by a staged kind-of scene that in some ways might make the crocodile appear like it could be in a Disney animation reel; the same chops we witness give this ogre the most powerful jaws of any living entity. So, whereas a great white sharks’ bite pressure is 800 pounds per square inch and a hyenas measures up at 2,000, this efficient killer’s is over 5,000. Nonetheless, ironically, crocs have a weak set of muscles that open their mouths, so even a couple of elastic bands around the snout can keep them closed.

It’s no surprise the animals that first appeared 55 million years ago – ten million years after the dinosaur extinction – are part of Australian mythology. There are Aboriginal paintings of crocodiles done millennia ago, because these cold blooded reptiles were significant in their Dreamtime, a period which we might better understand as the time of Creation.

Much more recently, too, these fiends have made a cultural impact. Who can forget the eponymous Dundee films, where a bushwhacker (Paul Hogan) takes the survival skills he learnt capturing these brutes to New York and Los Angeles, often with hilarious results. And, in a sense, even more directly, these rapacious gluttons inspired Greg McLean’s Rogue (2007). Yes, this horror flick is not about the dwarf-sized peeping Tom who jumped up and tried to snatch the Queen’s long johns off her washing line; rather, it entails the same sort of cruise I am on up the Adelaide River but things go disturbingly wrong when the passengers are besieged by a colossal crocodile. 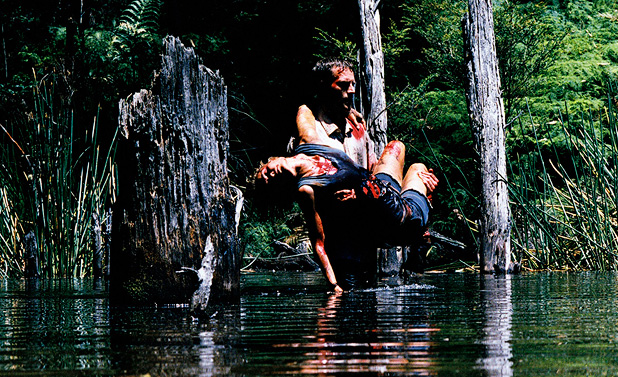 I caught up with McLean and he told me what had triggered his initial interest to make this picture: “When I was young I saw a film called Northern Safari about a guy who took 16mm home movies of his family’s adventures in the Northern Territory of Australia. It featured amazing footage of huge crocodiles and other creatures from this incredible locale, which I, at the time, didn’t know was real. It seemed too extreme, too exciting a place to be real. I found out later, it is real and it’s one of the most rugged, beautiful and dangerous environments on the planet.”

“Another thing that inspired the movie was seeing a news report about a huge saltwater crocodile that was attacking fishing boats in Northern Territory. Blew me away – and I can still remember the feeling of seeing the hunters out there, at night, in tiny tin vessels, chasing this monster they could not see. I held that image and fear inside [me] for many years, and then when I started screen-writing I managed to turn that inspiration into a story which allowed me to take an audience to that terrifying place. And to experience what it would be like to be stalked by a seven meter saltwater crocodile.”

In fact, the actual croc that instilled such dread in Mclean was called Sweetheart. I guess, because as with my former partner, one open-mouthed kiss would really more than suck the life out of you. Now stuffed and in the fascinating Museum and Art Gallery of the Northern Territory, the reptile not my ex, its bulk of a frame indicates that these brutes readily grow to over five metres with the largest one ever recorded, being over seven. On this trip, we did not see any over 3.5 metres according to our skipper, yet, each individual was still big and frightening enough to make one believe that it was responsible for the lyrics in Elvis’s (You’re the) Devil in Disguise.

Incidentally, I don’t think that crocs are the only spectacular wildlife in and around the Adelaide River: white bellied sea eagles swoop down and skim the water to pluck fish out with their talons; wild boar have the ultimate slumber in piles of mud, and one-tonne buffalo roam about with their black, moist nostrils stuck in the air, with the haughtiness of royalty.

Big Day Out returns to New Zealand in 2014