Save yourself a few quid this year by skipping the pricey ski trips abroad. Rather than fork out for flights and expensive accommodation in the Alps or the US, you can hit up slopes much closer to home for a bargain snowy session.

Across the country there are centres offering tip-top skiing and snowboarding facilities.

And we’re not talking about any of that uninspiring dry rubber nonsense – these places have plenty of the white stuff (or at least the man-made version) to practice on. Wrap up warm and get involved at our pick of the biggest and best slopes in the country. 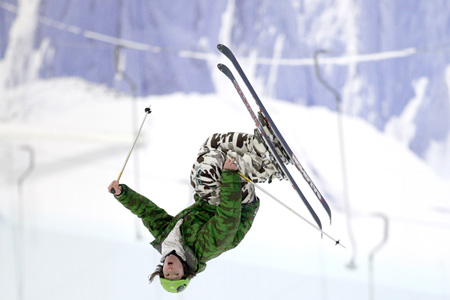 With two 25m- and 30m-long teaching slopes in the Snow Academy areas, separated from the fast-paced chaos of the main skiing stretch, it’s ideal for newbies.

Book an hour’s lesson for £27 and turn up wearing warm clothes, the rest – equipment and protecive head gear – is provided.

More chilly thrills: Adrenaline tubing is every bit as fun as it sounds. Plonk yourself in one of the inflatable rings
– specially designed to glide smoothly over snow – and hurtle down the slopes at top speed.

The best thing about tubing here is that it’s for big kids only, so you can go hell for leather without having to spend time waiting behind a queue of tots. A 30-minute session is £9. 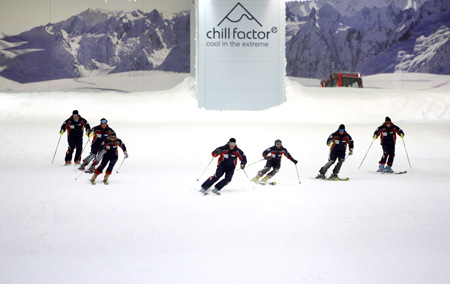 The white stuff: As if Manchester wasn’t chilly enough already, Chill Factore’s 180m slope brings the temperature down even further, as it’s a shivery -1.5ºC inside.

There’s a great snowboarding scene here, with taster sessions (£27 for an hour-long group lesson) for newbies.

If you’re already a bit of a pro, you can take private lessons to learn even flashier flips and spins. You big show off.

More chilly thrills: Does riding an ‘Avalanche’ sound extreme enough for you? If you’re not put off by visions of being buried alive in a snowstorm, give snow-sphering a roll.

You’ll be harnessed in to a huge plastic ball, which is four metres in diameter, then pushed down the slope, getting up to an exhilarating 30mph.

Turning 360 degrees, this isn’t for the faint-hearted – you’ll have to steady your shaking knees after with a stiff après-ski drink at the bar overlooking the slopes. Snow-sphering costs £24.50 for a two-hour session. 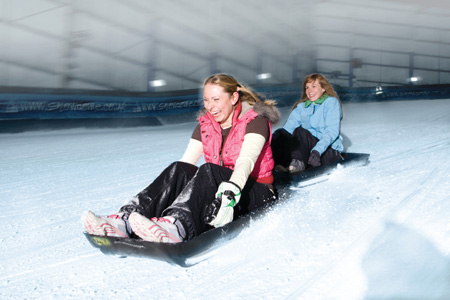 The white stuff: The Castleford branch of Sno!zone holds more than 1500 tonnes of snow, which means all the sub-zero skiing and snowboarding shenanigans you could ever ask for. Short on time?

Book on to the intensive eight-hour training day, during which you can cover the beginner’s programme (normally split into four lessons) in one go.

When you’re not zooming down the slopes, keep your eyes peeled for skiing celebs – apparently Justin Timberlake, Peter Andre and Girls Aloud like a little Sno!zone action, too.

More chilly thrills: There are heaps of activities besides skiing and snowboarding.

Try the ice slide (£15.99 for 45 minutes), where you’ll be given a large rubber tube to sit inside before speeding through the carved-out ice-run.

The white stuff: Here you’ll find an impressive 200m main run, the longest in the UK, and some 1500 tonnes of snow, making it spot-on for intermediate skiers and boarders looking to improve their technique and practice at speed.

More chilly thrills: At the moment, your only non-skiing or snowboarding option here is sledging, which costs £11 for 30 minutes.

However, there are plans to open an ice luge (a first for the UK) and an ice-climbing wall before winter’s end.

Whitsundays win it at the Australian 2014 Golden Backpack Awards

Cocktails in the city