But it’s not the 1920s, and that is very clear once the first performer is welcomed to the stage.

As our masked host informs the audience, “there’ll be no fans or feathers here”. This is no traditional burlesque show. This is the Jaded Vanities – the same group responsible for the hugely popular Star Wars Burlesque show.

Triangulating somewhere between industrial, punk and S&M, the show has a distinctly modern and fetishistic vibe.

In spite of the overall modern aspects of the show, some performances came across as mostly straight up different. Costumes went from American football helmets and giant robotic claws to pelvis underwear and smilodon skulls. The finale is spectacularly titillating, even though the girls are actually wearing more clothing by the end of it.

If you’re a fan of burlesque you’ll likely find the shift in costumes refreshing, and if you’ve never been before it’s an introduction you won’t soon forget. 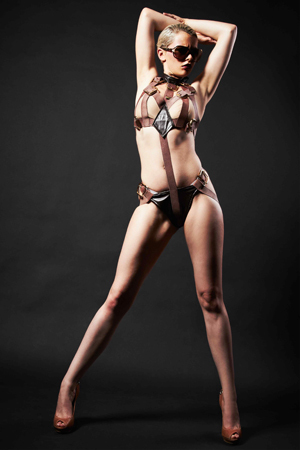 Some of the dances are distinctly traditional and only differ thanks to the unique costumes. Others wholly incorporate the character of the outfits and are a lot better for it.

If you’re looking to experience just how flexible and acrobatic a woman can be, without emptying your wallet and being called a pervert in the process, then look no further than the Jaded Vanities.

It’s no striptease, but it is exceptionally sexy and guaranteed to get your blood pumping.

Take this advice on board however; get yourself a seat that’s close to the stage. The set up of the venue means it can be difficult to see the bottom of the stage from the back, which is where the sexiest parts of the show happen.

The Jaded Vanities are at The Vanguard every Sunday until the 8th September, so get into it. It’s much more socially acceptable than a strip club.