Djerba, Tunisia: Gateway to the Sahara

Explore the sand dunes of the Sahara and the colourful markets of island oasis Djerba in Tunisia. Here’s what happened when TNT‘s Frankie Mullin visited.

I’m galloping across sand dunes on a skittish black horse, the kohl-rimmed eyes of my companion glittering under his turban. As the oasis recedes behind us, I revel in another of Tunisia’s movie-esque moments.

Later, I have my Jim-Morrison-in-the-desert-on-acid scene (without the acid) when our 4×4’s tyre is punctured mid-Sahara. As our driver and two lads change it, I dance around helpfully on top of a dune. Mr Mojo Risin’ would have been proud.

Back on track, our driver flings his 4WD down the dirt road towards Pansea Ksar Ghilane. We’re heading for a ‘Bedouin-style’ camping ground in the middle of the Sahara, five hours drive from the island of Djerba, which has been our base. 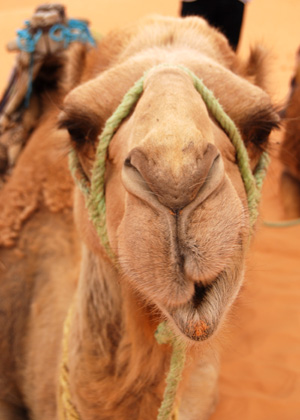 Arriving in the date-palmed oasis, it doesn’t take long to realise that we won’t be roughing it. Our linen tents have air-con, showers, toilets and proper beds. Who knew the Bedouin were so soft?

‘Authentic’ experiences aside, the place is amazing. As torches light up the trees, we swim in the spring-fed pool, gaze at the stars and marvel that we’re in the centre of the world’s most famous desert.

There’s no heating beans over a camp stove either. We gather round the fire to watch our chef cook a traditional nomad’s stew in the coals. It’s delicious.

The next morning we head to the Grand Erg Oriental – the smooth, ridged dunes that spring to mind when someone says ‘Sahara’. A 4WD would be fine, but camels win hands down to experience the quiet immensity of the desert.

Saying goodbye to our oasis, we drive East to the ancient Berber fort of Chenini, in the Tatouine region. The 12th Century cave-like granaries, built into the mountain top, inspired scenes from Star Wars and are an incredible mix of human history and rugged nature. A hardcore hike up the winding path is rewarded with a spectacular view across the valley floor. 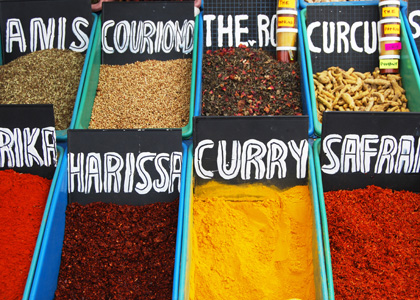 Back in Djerba, we visit Houmt Souk, the island’s largest town. We’re drawn into haggling for silver, leather, ceramics and spices. As with the rest of Djerba, the market (souk) is geared towards tourists, but the cafés still attract locals.
Djerba is renowned for its pottery and in the afternoon we visit Guellela to watch a demonstration of pots being made.

The drive back along the coast, past white, domed buildings is beautiful and I recall that Djerba features in Greek mythology. The island is thought to be home to the seductive lotus eaters of Homer’s Odyssey, who enticed Ulysses’ men by feeding them lotus flowers so that they refused to return to their ships. 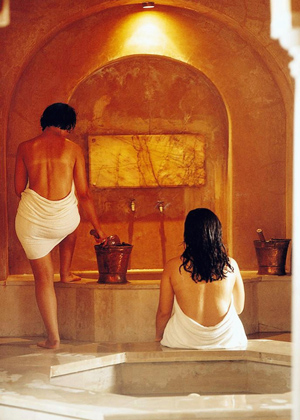 Djerba is a centre for thalassotherapy – a form of treatment based on the healing properties attributed to seawater. Returning from the desert sandy and aching from a camel ride, I can hardly wait for my treatment at the Yadis spa. We begin by sitting in a fragrant steam room, followed by a cold hose down.

Next, I lie on floats in a saltwater pool as a masseur moves me around in the water. I almost drift off to sleep. Finally I’m given an oily massage that leaves me feeling so relaxed that I get lost on the way back to my hotel room.

GETTING THERE: Fly direct to Djerba with Tunisair (tunisair.com).
GETTING AROUND: Rent a scooter or a buggy. Taxis are cheap but agree on a price first.
VISAS: Australians can obtain a visa upon arrival. South Africans and New Zealanders need to apply before departure through the Tunisian Embassy.
CURRENCY: Tunisian Dinar. 1 GBP = 2 TD.
LANGUAGE: A Tunisian version of Arabic, but French is widely spoken.
GOING OUT: A beer is about 4 TD.
ACCOMMODATION: A basic hotel room costs about 20 TD a night.
GET MORE INFO AT: cometotunisia.co.uk

» Frankie Mullin travelled to Djerba with Tunisair (tunisair.com; 020 7734 7644), which operates two flights per week from London Gatwick to Djerba, via Monastir. Prices start from £151.30, including tax.

Does my bum look big in these glasses?

Fraser Island: The Sand of God