Freetown Christiania in Copenhagen celebrates 40 years of existence today, with some interesting changes.

The controversial former army barracks, which covers 85 acres in Copenhagen and has around 850 residents, has been a political hot potato for Danish people since its inception, with ongoing battles with the police and politicians who don't necessarily share the hippy ethos the commune was built on in the 1970's.

The land it stands on is of great value to real-estate developers who have been keen to move the community out to develop housing in the city. The free availability of illegal drugs has also caused problems for the residents who over the years have had to deal with police raids on their homes due to the area attracting harder drugs and organised dealers.

Over a thousand people live in the Danish commune for alternative lifestyles – artists, small business owners, the homeless, new age hippies and musicians. The area even has its own currency, the Lon. Cannabis is freely available on the aptly named Pusher Street. 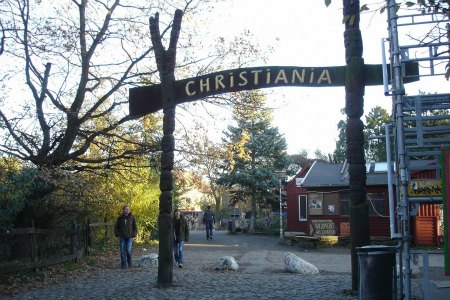 Having been given new lease of life with government approval the Christianites plan to raise funds for the area by selling shares in their home. A spokesman, Risenga Manghezi, said:

"Anybody can buy them. They are to be seen as donations supporting the buyout of the free town of Christiania and as such worth more than money. This gives people ownership in something that is already theirs for free, so we feel it is a pretty safe investment."

Christiania has its own flag, its own set of laws and is car-free, with green spaces, unusual architecture and painted murals throughout the site. Their motto is 'May peace, love and oneness prevail on Mother Earth and everywhere'