Monkey see, monkey do: Does ape really own rights to selfie?

The Telegraph reported that Wikimedia, the US-based organisation behind Wikipedia, has refused David Slater’s repeated requests to remove the image which is used online without his permission.

The photo was captured in Indonesia in 2011 when a crested black macaque came up to investigate Mr Slater’s equipment and ended up taking hundreds of selfies.

The picture in question shows a grinning female macaque and instantly made headlines around the world, appearing on websites, newspapers, magazines and television shows. 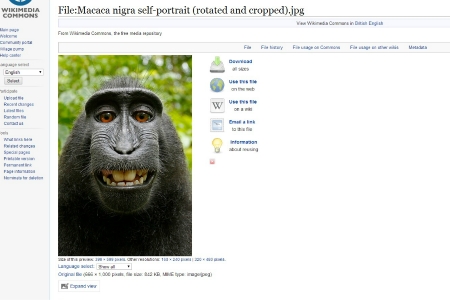 However, Mr Slater is now facing a legal battle with Wikimedia after the organisation added the image to its collection of royalty-free images online – a data base of 22,302,592 images and videos.

He says this is jeopardising his income as anyone can take the image and publish it for free, without having to pay royalties.

But after complaining to Wikimedia the group stated that editors decided Mr Slater has no claim to the image as it was the monkey that took the picture.

The image has been removed in the past when he complained, but different editors regularly upload it once again.

“Some of their editors think it should be put back up,” he said.

“I’ve told them it’s not public domain, they’ve got no right to say that its public domain. A monkey pressed the button, but I did all the setting up.

“Photography is an expensive profession that’s being encroached upon. They’re taking our livelihoods away.”

In its report Wikimedia said that it “does not agree” that the photographer owns the copyright, but also that US law means that “non-human authors” do not have the right to automatic copyright of any photographs that they take.

“To claim copyright, the photographer would have had to make substantial contributions to the final image, and even then, they’d only have copyright for those alterations, not the underlying image. This means that there was no one on whom to bestow copyright, so the image falls into the public domain,” it said.

Opinion: Who we have sex with shouldn’t cost us our careers