“Good news, guys!” shouts our guide, Francesco. “We have some Northern Lights activity!” A huge smile breaks out over my face. After all, this is what I’ve travelled miles to see. “Tonight,” the Italian continues, “activity is at seven per cent – which is much better than zero!” Our faces fall, and as the tour bus rumbles on into the darkness, it seems the ever-elusive Aurora Borealis will remain beyond our grasp.

I’m in Tromsø, the largest city in northern Norway and one of the world’s best – and most expensive – places to see the Northern Lights. It’s fair to say that with £10 sandwiches and £6 beers, it’s not the budget traveller’s destination of choice. But, by doing your homework and booking trips independently, you can see the phenomenon on a shoestring.

Although the lights don’t come with a guarantee, anyone hoping to see them within the next year would be particularly unlucky to come home disappointed. The Aurora Borealis forms when solar particles react with the Earth’s magnetic field, and currently, activity is at an unusual high. Not only does this mean now is a great time to go Aurora hunting, but scientists predict the displays in 2012 and early 2013 will be at their brightest for 50 years. 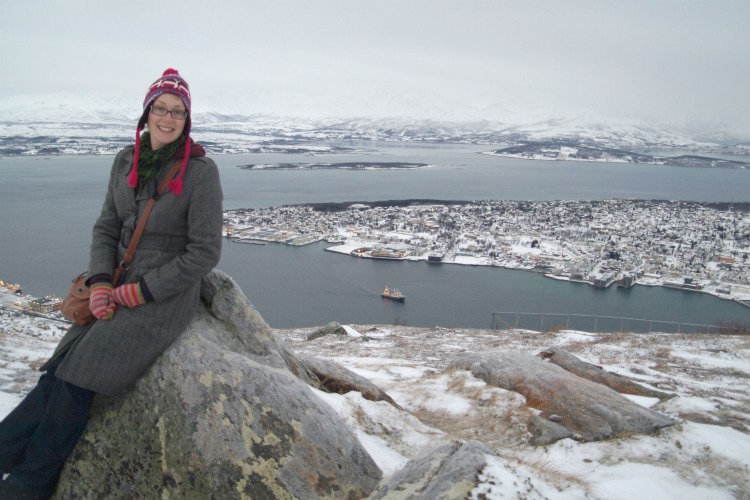 “It’s true,” Francesco says when I quiz him on this. “Something is definitely happening. Even in the last few weeks, the lights have been a lot brighter and easier to spot and I’ve experienced the most amazing shows I’ve ever seen – and I’ve seen a lot,” he chuckles.

This is why, with fingers crossed, we join Francesco’s daily tour and find ourselves eagerly peering out at the pitch black night. Although I know we’re driving past magnificent snowy mountains and frozen lakes, I can’t see a thing. Besides, my attention is purely focused on the inky sky above. For the best chance of seeing the lights, you need clear weather conditions and as little pollution as possible, so it’s a good idea to escape the city if you can. At about £90, our five-hour Northern Lights tour from Tromsø is an extravagance, but it’s still the cheapest in town.

Many companies offer the same sort of thing for at least £50 more. But, with no guarantees of seeing the lights, you could have all the money in the world and still leave empty-handed. Our tour, which caters for about 40 Aurora hunters at a time, leaves the Rica Ishavshotel every day at 6.30pm. 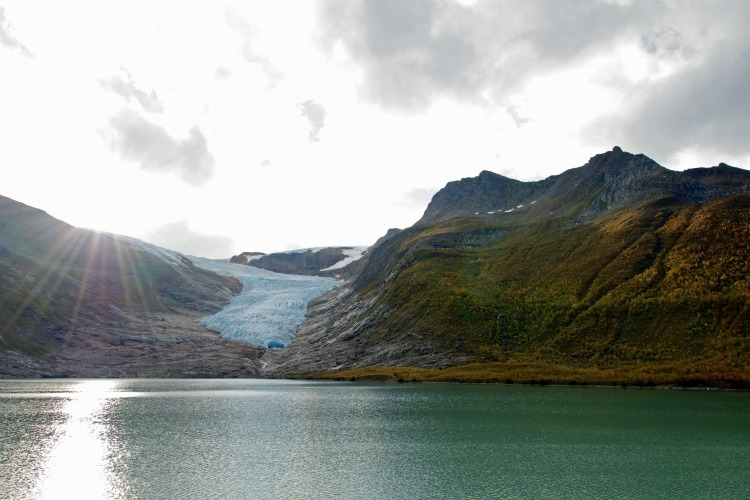 It attracts travellers of all ages and, as Francesco buzzes up and down the aisle helping people adjust their cameras to the right settings, I feel like I’m in good hands. Before long, we’re zooming towards the Finnish border – a great place to see the lights, because it’s so dark and desolate. Keeping your eyes peeled for two-and-a-half hours is exhausting, but when the bus begins to slow, my heart leaps. Everyone rushes to pull on their extra layers as Francesco warns us to wrap up warm, telling us that it’s “a bit chilly” out. “-18°C!” he yells. Clambering off the coach into the snowy wilderness, the icy weather hits us like a slap and, within minutes, I’m hopping from foot to foot like a demented rabbit.

Fortunately, there is one thing to distract me from the extreme cold and that’s the sky. Where it was completely black, a thin arc of grey now stretches above us, like a trail of smoke. The hazy vision moves slowly, teasing us open-mouthed earthlings, who are frozen to the spot. But then it’s like something clicks. As the air crackles with anticipation, the grey turns to green and the arc forms fat, jagged lines that jump out at us. It’s almost as if someone has cut the sky with a knife. I catch my breath as the lights dance above us. This is really it. “Wow!” screeches Francesco, snapping away with his camera. But aside from his yelps of joy, the rest of the group is silent, in awe of the amazing show above our heads. 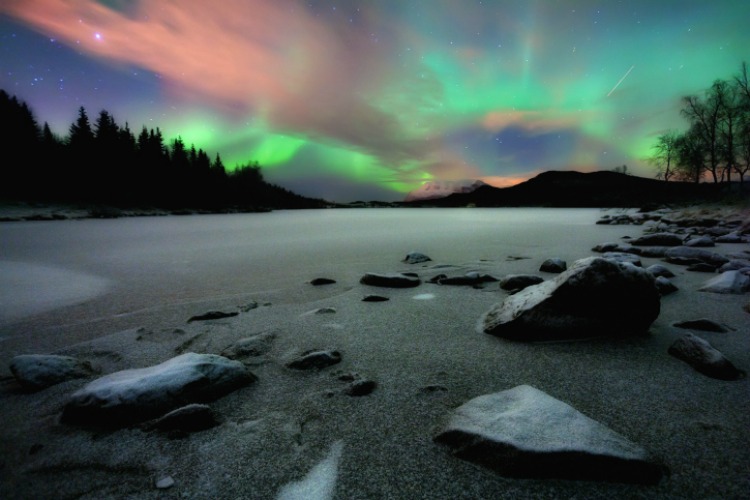 The Aurora stays for just a few minutes before fading as quickly as it came, but that’s enough. We’re speechless – and quietly thank Lady Luck for watching over us. After thawing out with hot chocolate and cookies back on the coach, I reflect that what everyone says is true – seeing the Northern Lights really is priceless…

– Instead of splashing out on a taxi or taking the £6 airport coach, jump on the local 40 or 42 bus for half the price.

– Don’t waste money on bottled water – Norway has some of the cleanest tap water in the world.

– Those heading to Tromsø’s cable car should ask for a ‘Fjellheisbillet’ when catching the 26 bus from the city centre. This includes a return bus ticket and the fee for the cable car and works out much cheaper.

– Don’t want to pay £120 for a tacky cruise? Take Hurtigruten’s eight-hour trip to Skjervoy for £65, leaving Tromsø at 4pm and returning via the moonlit fjords. (hurtigruten.com)

GETTING THERE: Flights from London Heathrow to Tromsø, via Oslo and Trondheim, start from about £300 return with Scadinavian Airlines (flysas.com/en)

Budget: For food served with a side order of heavy metal, head to Bla Rock Cafe.This hard-rocking joint is famed for its burgers, which will set you back about £10, while those on a tighter budget can enjoy a big basket of fries for a fiver. (blarock.no)

Midrange: Join the locals and chow down at popular Norwegian chain, Peppes Pizza. A large pizza is more than enough for two people and a sit-down meal with soft drinks will cost about £30. (peppes.no)

Luxury: Splash out on a meal at Emma’s Drommekjokken, or ‘dream kitchen’. This classy restaurant is one of Norway’s best-known eateries and a great place to try traditional dishes like reindeer and salted cod. You might need a credit card handy, though – main courses start from £35. (emmasdrommekjokken.no) 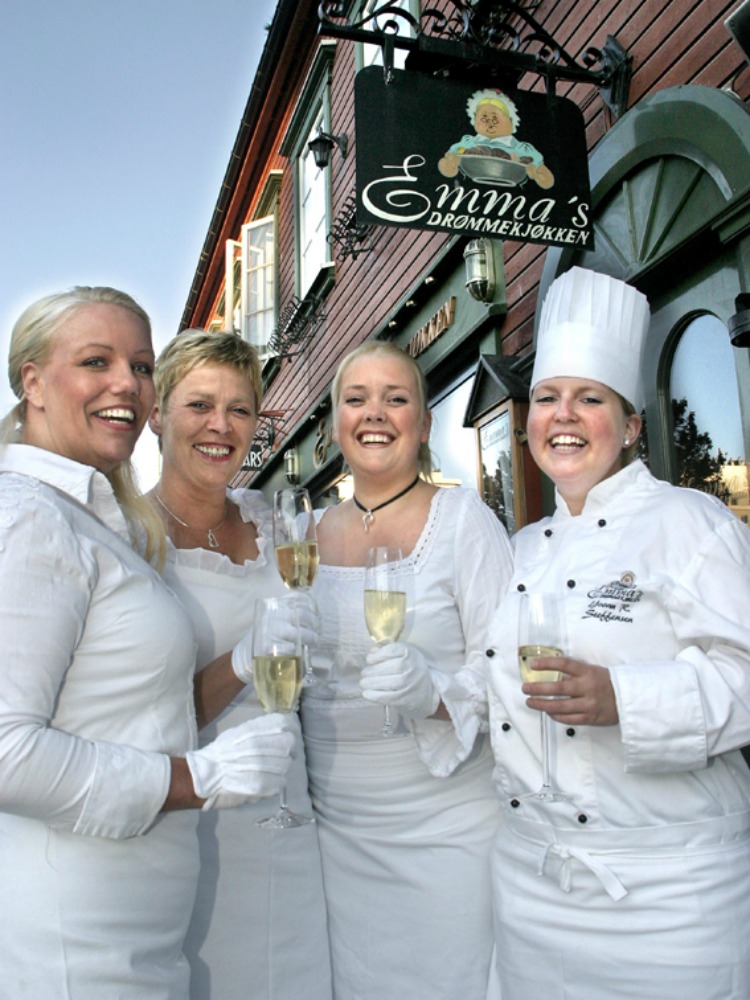 Budget: Alcohol is notoriously expensive in Norway with beer costing an eye-watering £6-7. But if you only go to one bar, make it Olhallen. This atmospheric beer hall is attached to the Mack Brewery and has changed little since the Twenties. It’s a great place to sample Nordic beer. (olhallen.no)

Midrange: For grown-up chic, head to Kafe Verdensteatret. This cool cafe is housed in one of Europe’s oldest working cinemas and has squishy sofas and walls lined with vinyl. If you see something you like, they’ll pop it on the record player while you relax with a glass of wine. (verdensteatret.no)

Luxury: Bars don’t come better located than at Rica Ishavshotel. This swanky place overlooks Tromsø harbour and has great views of the surrounding mountains. The hotel’s Skipsbroen panorama bar may be pricey but it’s well-placed to spot the Northern Lights – and the more you drink, the better your chances. (rica.no)

Budget: Masochists may enjoy sleeping in a tent during the winter months but, luckily, Tromsø Camping has more to offer. This basic site is a short drive from the city and has everything from simple shacks to two-bedroom bungalows. Open all year round, cabins sleeping two start from £50pn. (tromsocamping.no) 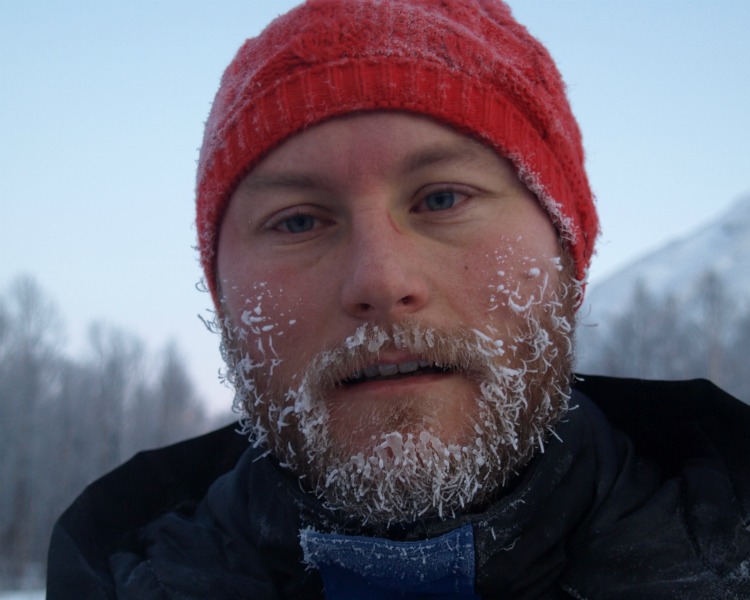 Midrange: If space isn’t an issue, you can’t beat the Thon Polar Hotel. Located slap-bang in the centre of Tromsø, this chain hotel offers smart-yet-simple accommodation – with friendly staff to boot. Ensuite rooms start from about £95pn. (thonhotels.no/polar)

Luxury: The Radisson Blu was recently refurbished and is now the height of modernist chic. Rooms at this stylish hotel, down by the harbour, cost upwards of £150pn but include access to the Top Deck sauna, with views to die for. (radissonblu.no/hotell-tromso)

Sunset On the River