And she’s a dynamic powerhouse as Momma Rose, the mother of all stage mothers in Jonathan Kent’s assured production of this 1959 musical which was inspired by her daughter’s memoirs. 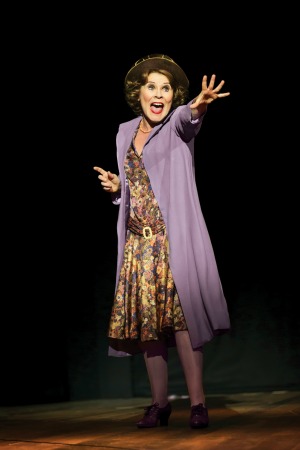 With a book by Arthur Laurents, music by Jule Styne and lyrics courtesy of the ever witty Stephen Sondheim, it follows the fortunes of Momma Rose and her children – Louise and her younger sister June – as she drags them across America from venue to venue in the dying days of vaudeville.

It’s a sometimes comic but cautionary tale of blinkered determination to make first June, then (when she escapes the maternal clutches) an initially reluctant Louise into stars at any cost. From lying about their ages both to herself and to the bookers (“Baby” June and “Baby” Louise were still playing kids well into their teens) to stomping on stage mid-act to sort out scenery and proffer advice, this thrice-married mother will stop at nothing to see her offspring achieve the stardom she once wanted for herself.

Peter Davison provides genial, long-suffering support as Herbie, their devoted agent and would-be husband no.4, and Lara Pulver’s Louise emerges butterfly-like into the limelight of burlesque when she finds fame as the stripper Gypsy Rose Lee. But it’s Staunton’s journey from single-minded resolve to lost superfluity – plus a couple of show-stopping numbers (Everything’s Coming Up Roses, Rose’s Turn) along the way – which really make this musical, back in the West End after over 40 years, shine.

London Is The Place For Me – Trinidad and Tobago cultural festival

Football: Fabregas could play for Barcelona on Wednesday