But ECT damaged Aston has brought him back to his junk-filled attic home where rain drips endlessly through the ceiling and only scraps of peeling wallpaper remain.

A kindly, slow thinking soul (who spends most of his time tinkering with the plug of a faulty  toaster   instead of getting on with building the garden shed he longs for or getting to grips with the decorating necessary to bring the rest of the house into commission), Aston is, even to the homeless Davies, a likely easy touch. 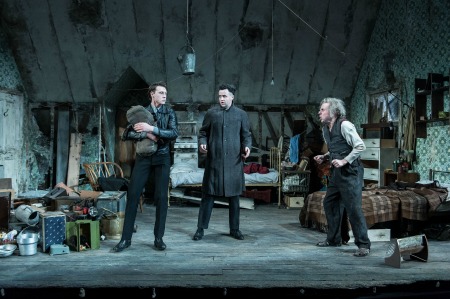 Slack-jawed, wheedling and xenophobic, Spall’s shifty Davies has a cunning gleam in his eye as he increases his demands, but he’s no psychological match for Aston’s younger brother – sleek, unpredictable Mick (George MacKay giving a scene-stealing performance of unpredictable menace). who verbally pokes and prods the intruder with a staccato interrogation

Visiting the Lake District in springtime