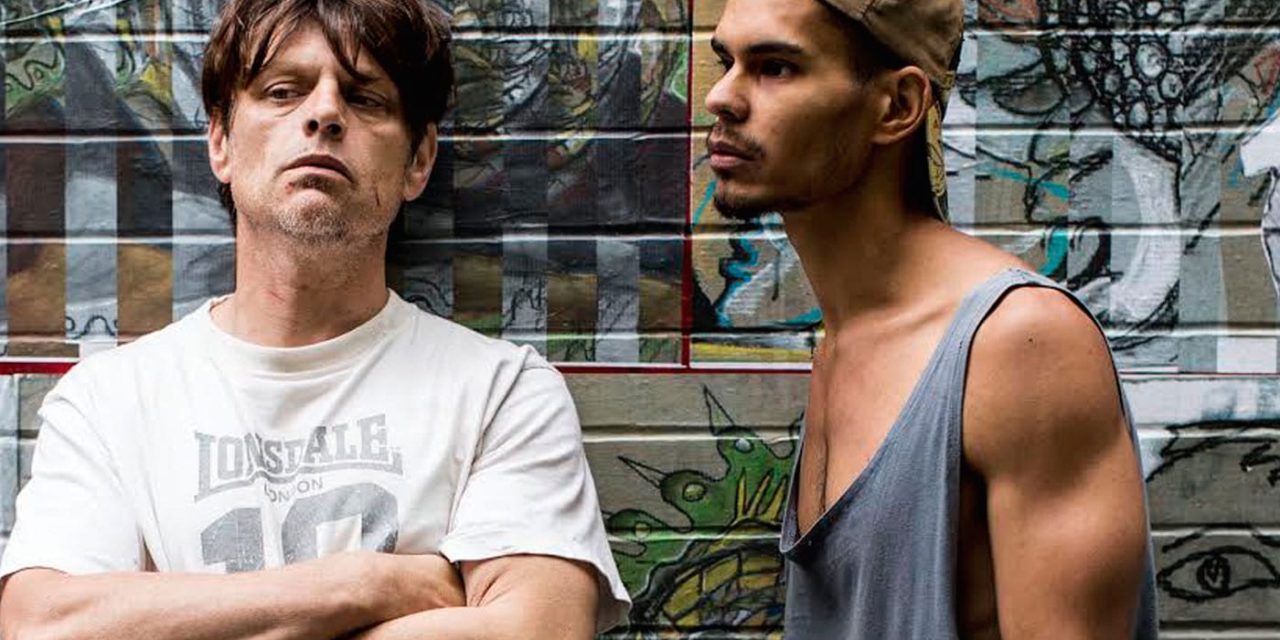 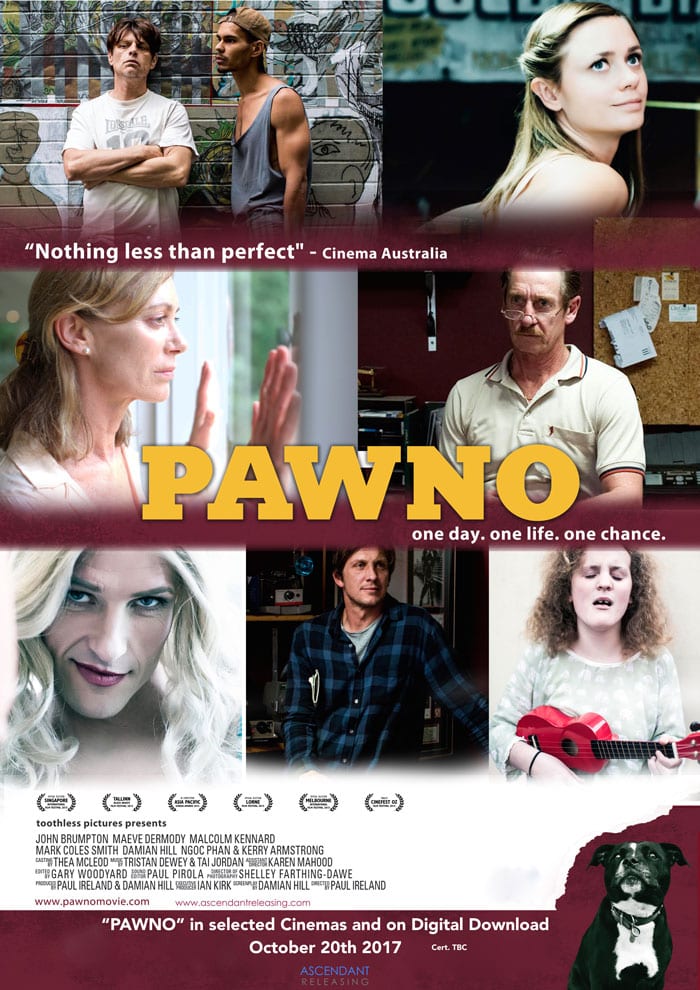 I’m not going to go into too much detail about the film as it would spoil it for anyone who does get the chance to watch it. But what I will say is this… It’s a wonderful reflection on suburban life in a authentic and impoverished part of Melbourne. The film tells the story of a day in the life of around 12 characters whose lives are intertwined around a pawnbroker store and the suburb of Footscray. It portrays the best and worst of society with glimpses of the good bad and ugly sides of humanity in a wonderfully Australian way! I love real life portrayals in Ozzie films and put this up there with the best of them including Chopper and Samson and Delilah.

It was a delight to watch and I hope many of you will track it down on digital download to experience for yourselves.

I spoke with lead actor, writer and producer Damien Hill to find out more about it. 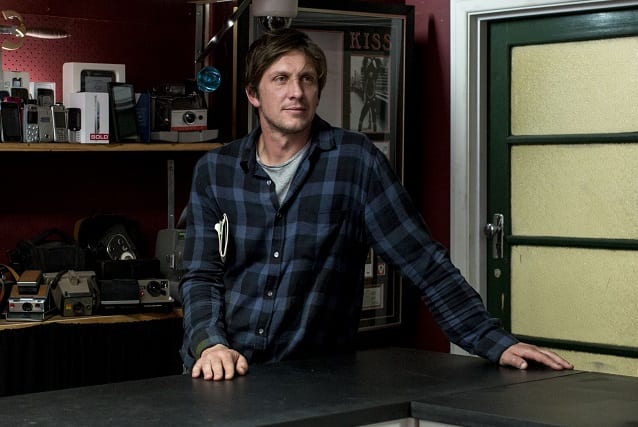 How did you find the dynamic of writing, starring and producing all together, the balance of being behind the lens whist in front of it?

Not really The acting side of it was what I’m more used to, and Paul’s a beautiful director. It was already written, and Paul and myself spend about a year and a half when we were scoping it out with locations and casting and raising finances. We kept mucking about with the script to get it right. Pauls a wonderful actor in his own right. He’s Scottish and lived in London for years, and came out with Trainspotting the play in Australia. He had taken that from the West End to here and fell in love and moved here. We met acting in another play it it went from there. Producing it was probably the toughest part! We tried to get a lot of people around us who were more skilled in their areas than we are, and it was really beautiful we filmed in Footscray, Paul and I and a few other people we built the pawn brokers rented out a shop, the whole operation worked out of there. Behind it was costume, lunch, make-up and the production office. We rented it out for about 6 months, and I lived around the corner.

Originally I had written it in a different suburb, but it had become a lot more hipster the suburb I had in mind. Again it was Paul who suggested it, he knew where I lived and we would come out here and eat, it’s one of the suburbs with an awful lot of pawn-brokers. There’s something quite special about it on screen. Very multicultural and diverse on the city fringes.

Would you say it was a fair character portrayal of the area?

Probably! Certainly some of the scenes. Like when Harry and Len were looking out at a block of apartments. That probably summarises a lot of people reactions to how things are changing in the area. It’s one of the last pockets of affordability and probably won’t stay like that for much longer! We moved there about 7 years ago. It’s pretty hectic there in Footscray the people are lovely, we got to know many people in the shops nearby whilst filming and the people were really generous and excited once they started to get used to the filming going on. The Mall where some of the stuff is filmed, you couldn’t recreate that! some of the smells and noises.

You also wrote the screenplay, did the characters come out as you envisaged?

Yeah pretty much. One of the main things that changed, I’d written it saying right we want to make a film but we’re not going to have a lot of money. It was pretty much a whole bunch of vignettes in the pawnbrokers and Carlo and Pauly outside on a bench. A little bit more silent J and Bob, out the front. When Paul took control of the Script and it became his film, it’s then that they started to move and explore Footscray. Essentially they are the same characters but we got to see more of them in the transient journey they took. They were great together I love those two characters. They are often referenced as the homeless guys in reviews, but they aren’t homeless, they’ve got a home which they go back to at the end of the day, there just those types of guys that want to be out on the street, they don’t want to be at home watching crappy tv they want to be active in life in their own sort of way!

You may have answered this already, but if you had to pick a favourite character who would you choose?

I actually like the man who comes to buy the GPS the best. I really like him. The dentist! I was working washing dishes for like 10 hours a day and these guys I worked with were amazing. I got to know them better and began to hang out. They were working two or three jobs and actually were really well educated. One had a masters in accounting another had an engineering degree. Here’s me complaining about the little work I actually did and there are these guys working so hard. I got to hear more about their lives and I often think back to these guys at the restaurant I met years and years earlier and I guess that this character evolved from them.

Would you say other characters are also taken from reference points in your own life experiences?

Some of them are just made up, but Danny and Les is a bit of a bastardised version of what I’ve seen males can be like. Where they do things with actions and less words. Les is very supportive of Danny in his own kind of way.

Moving on from the film itself. The film was funded very frugally with a very modest budget. With crowdfunded sources as well. How did you find the process of getting the cash together?

The crowdfunding was horrible and I never want to do it again. It’s very difficult asking people for money! But we had some really lovely people, amazing, unbelievable private investors which were so generous and have become good friends. They were real people who believed in the project and supported us and as the film evolved and it began to do well they then helped us get to certain places and that sort of stuff. They were really great and are also involved in some similar projects. They could have looked at it on paper, and gone It’s a first time writer, first time producers, first-time director and also cast with very few known actors including myself as one of the main parts Danny… But they bought into it and made it all possible.

One last question… Just reflecting on the modern movie distribution model. The Netflix generation. How are you finding that as a budget filmmaker? It seems to be changing the whole dynamic of films and distribution. Do you see it as a positive or as a negative influence?

We can’t get through to Netflix! But I watch Netflix… They’re not listed in the phone book, so we can’t get hold of them! We’d love to talk to them!

Check out the trailer here –