You’ve produced a lot of films but moved to the director’s chair (with Maxim Pozdorovkin) here. Why now?

I’ve always spent a lot of my time making films about art and politics and this was a film that combines those two things in a sublime way. I grew up in a London in tune to punk-rock, so to make a film about the revival of punk for political purposes became too much to resist.

It certainly was not. Pussy Riot would probably say they were pro-religious but campaigning for a more democratic and less sexist church, where women can participate in rituals on the same level as men. In Jerusalem there’s a new group of women campaigning to participate in the rituals at the Western Wall and they were granted the permission to do that. So in Judaism’s case women were seen as acceptable whereas the Orthodox Church is a long way off that. 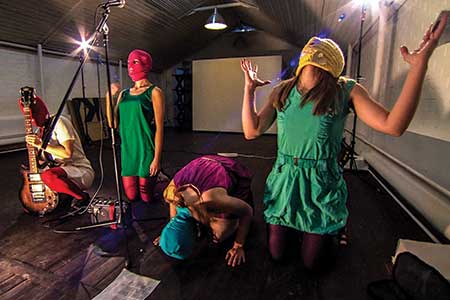 Has their message been lost?

It has been deliberately confused. The cathedral performance was about demonstrating the close relationship between Putin and the Orthodox Church, lobbying for a greater involvement of women in church services, and protesting the misogynistic and sexist nature of Russian society. It is a lot for non-Russian audiences to get their heads around. And the Russian public, too, who saw them as cynical, blasphemous anarchists.

Has Western involvement through people such as Madonna and Yoko Ono helped or hindered their case?

It has been positive in terms of the Pussy Riot morale, to know they have international support. Has anything Madonna’s said had any effect on the state? I doubt it. Has it provoked them in to being more recalcitrant? I think not as well. They tend to ignore it.

Yekaterina Samutsevich was released last December. Are there any prospects for the early release of Nadezhda Tolokonnikova and Maria Alyokhina?

I am not saying there’s no hope [but] they have already had a couple of appeals for early release turned down and for ridiculous reasons, like Nadia not participating in the prison beauty pageant – which is clearly something as a feminist she would not want to do. And for early release they’d have to admit their guilt, which they are not prepared to do. 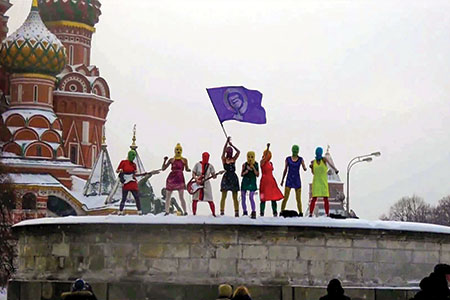 People are calling it ‘the Pussy Riot law’. Had it existed last year it [the state] would have had a much clearer basis for what it did. This is reality in Russia – on a weekly basis almost, new laws are published that impact on people’s freedom of speech and their right to protest. And there are a lot of anti-gay laws, too. It is a very dark period in Russian culture.

Is it a step backwards?

It is. No one’s saying Russia’s not a democracy, but even in democratic countries, like the UK and US, you can have undemocratic laws passed. Freedom is a very fragile thing.

This is not a situation unique to Russia…

No, and that is something we would emphasise – it’s not having a pop at Russia but having a pop at leadership everywhere that seeks to bolster its popularity through suppressing expression.

Are people still fighting against this repression in Russia?

People are frightened off by these laws and the Pussy Riot prosecution. The opposition movement in Russia quietened down quite a bit after the mass demos last summer and winter, but they are regrouping. For Pussy Riot things are on hold until Maria and Nadezhda’s release. Then we’ll see what we do next. I’m sure they’re not about to retire. I have a theory that Maria will eventually be president of Russia.

Realistically, could you see her embarking on a career in politics in the future?

Yes, and I am half serious about it, too. It’s things like this that propel someone into the spotlight. The way she argued her case is very impressive and points to a potential political future.