The 24th Division of the Sherwood Foresters’ fortuitous discovery of an abandoned printing press in 1916 led to the birth of a satirical paper which annoyed the top brass by lampooning their cushy existence but helped raise the spirits of the troops regularly facing death.

They not only read it, but eagerly contributed to it, too – submitting more poems than its self-appointed editor Captain Frederick Roberts (the officer in command) and his even posher sub,  Lieutenant Jack Pearson (neither of whom had any previous experience of journalism)  could cope with.

Now Ian Hislop (best known as the long serving editor of Private Eye and for his ongoing appearances in the TV panel show Have I Got News For You) and regular writing collaborator Nick Newman have adapted their sympathetic 2013 television dramatization of this fact-based story for the stage. Scene changes are accompanied by snatches of period song, and a two tier set accommodates both life in the trenches and interposed music hall sketches (the latter, now dated, perhaps the least successful element of Caroline Leslie’s enjoyable production). 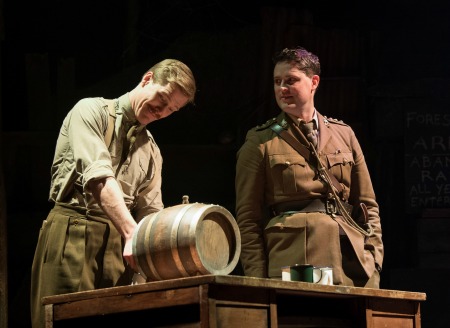 It’s a touching tale of camaraderie and of resilience under fire, with especially strong performances from George Kemp as Pearson (who also opens a bar to keep up morale),   James Dutton as Roberts (whose attempts to find his way on civvy street once the fighting is over frame the action) and Dan Tetsell as both the resourceful Sergeant with a printing background and a shrewd General prepared to turn a blind eye for the sake of the men on the front line.