48 hours in Stockholm: Swede as!

09:00  Set yourself up for the day with breakfast at the Skanstulls Hostel (skanstulls.se). This stylish, funky hostel is located in the uber-trendy SoFo area, on Sodermalm, the coolest island of Stockholm’s archipelago. The district is home to several galleries and boasts the most restaurants and pubs in Stockholm. Double rooms start at £80. Dorm beds from £22pppn.

10:00  Take the metro to the old town, known locally as Gamla Stan. Venerable buildings and cobblestone streets evoke Stockholm’s historical origins, but be sure to check out the main shopping drag Västerlånggatan, too.

11:00  Take a short walk to the royal palace of Kungliga Slottet. A Stockholm must-see, it was built on the site of the original royal castle which burned down in 1697. With 608 rooms, it’s the world’s largest royal palace still used by a head of state. Have a gander at the fascinating state rooms and the Skattkammaren, which displays the crown jewels. Next door, and also worth a look, is Stockholm’s cathedral Storkyrkan. It dates back to the 13th century and Sweden’s kings and queens used to be crowned here.

13:00  Stay in Gamla Stan for lunch at Zum Franziskaner (Skeppsbron 44, Tel 08-411 8330). Founded by German monks and arguably the oldest restaurant in the city, Zum Franziskaner does a roaring trade in Austrian sausages and schnitzel. It’s also the perfect place to get acquainted with herring – something of an obsession for Swedes.

14:00 If you have time, check out the Nobelmuseet (nobelmuseum.se), a museum dedicated to local-boy-made-good Alfred Nobel, the Swedish chemist/industrialist who created the annual Nobel Prizes in 1901.

15:00  Time for some culture now, so cross the bridge to central Stockholm and hit the Nationalmuseum (nationalmuseum.se), Sweden’s largest art museum. Here you’ll see paintings and sculptures by all the great masters; Rembrandt, Rubens, Renoir, Degas and Gauguin as well as works by Swedish greats.

17:00  If your legs aren’t too sore, cross another bridge to Skeppsholmen. Slightly less touristy, this tiny, charming island is the scene of Stockholm’s annual summer jazz festival.

18:00 Head back to Sodermalm to freshen up at your hostel before heading out for dinner at Koh Phangan (kohphangan.se), a quirky Thai restaurant where you sit in little straw huts surrounded by palm trees, and take in a tropical soundtrack of chirruping crickets and rolling thunder. The food’s pretty good too.

22:00  Sodermalm has no shortage of stylish bars so take your pick from Kvarnen (kvarnen.com), a restaurant/beer hall with two swanky bar-nightclubs attached that play host to some of the city’s best DJs, or Storstad (storstad.se), an impossibly hip spot where locals go to be seen. 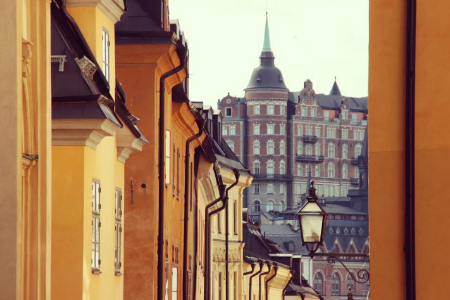 10:30  Have a well-earned lie-in before enjoying a laidback brunch at Sodermalm’s cosy Cafe String (cafestring.com). Their weekend “Frukostbuffé” menu is something to behold and is available until 1pm.

11:00  Sundays are made for a visit to the island of Djurgården, home to the world’s oldest outdoor museum, Skansen (skansen.se). Built in 1891 to give visitors an insight into how Swedes once lived, the hillside attraction boasts recreations of whole villages, complete with operating glassworks, churches and cafes (be sure to grab a snack). There are also buildings from rural areas including a Sami camp and farms – all very authentic, with Swedish mountain cattle, goats, pigs, chickens and more.

There’s also a mini-zoo with an impressive complement of Scandinavian animals including bison, brown bear, moose, lynx and wolverine. You could easily while away a whole day here but also try to make time for the nearby Vasamuseet (Vasamuseet.se). This maritime museum houses Sweden’s only surviving, fully intact 17th-century ship, the shortlived warship Vasa, which sank on her maiden voyage in 1628 and was painstakingly salvaged and restored in 1961.

17:00  Time for Fika, the Swedish name for “coffee break”.The Swedes take Fika very seriously. Usually involving cake, it’s something of an institution allowing them to touch base with family and friends. You should take it seriously, too, at Bla Porten (blaporten.com), which offers an array of baked goods in an alfresco garden setting.

18:00  Walk off all that cake with a stroll around Djurgarden. Sequestered among the lush forest and meadows are canals and shaded walkways.

23:00  For a proper late-night session, make a bee-line for the nearby nightclub of Mondo (Medborgarplatsen 8). With four dancefloors and three stages, it’s guaranteed to have something to suit every musical whim.

Fly from London direct to Stockholm with Ryanair (ryanair.com) in just 2 hours and 30 minutes.