And the talented Aamer again apologised to fans in cricket-crazy Pakistan for his role in the scandal by saying: “I ask for their forgiveness. I messed up.”

The highly-rated 19-year-old was released from jail last month after serving half of a six-month sentence for his part in the scandal during the Lord’s Test between England and Pakistan in 2010.

His former teammates Butt and Mohammad Asif are serving sentences of 30 and 12 months respectively, handed down by a British court in November, after the trio were found guilty of corruption and receiving illegal money.

The International Cricket Council (ICC) also banned all three players, with Aamer receiving the minimum five-year punishment after he was found guilty of deliberately bowling no-balls as part of a plan orchestrated by Butt and agent Mazhar Majeed, also now serving a jail sentence.

“I’m so angry with Salman,” said Aamer, speaking publicly for the first time since his release in an interview with former England captain Mike Atherton broadcast on Sky Sports on Monday.

“He used to call me ‘innocent one’. Like how an elder brother would speak to a younger one,” he added in comments translated by Sky into English from Urdu. “He should have helped me instead of involving me in all this.”

Aamer was once considered the hottest property in international cricket. He emerged on the scene in 2009 and was regarded as a better left-arm paceman than Pakistan great Wasim Akram was at the same age.

With 51 wickets in just 14 Tests, Aamer was on the verge of getting the ICC emerging player award in 2010 — but his career and life then derailed. 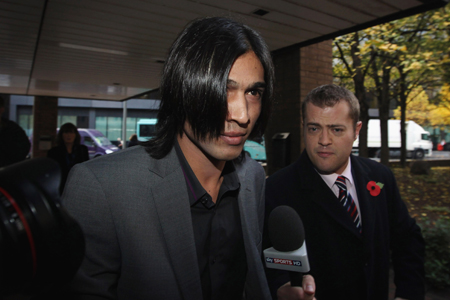 The charges were related to bowling deliberate no-balls by Aamer and pace partner Asif in the 2010 Lord’s Test against England.

What none of the players or Majeed knew at the time was that the scam was part of a sting operation put together by now defunct British newspaper the News of the World.

Aamer said he became entangled in the Lord’s plot the day before the Test because of fears over phone contacts he had with a businessman he knew as Ali, which Butt and Majeed exploited in a meeting in the car park of the team hotel.

“Suddenly he (Majeed) said ‘oh bro, you’ve got yourself in big trouble, you’re trapped, and your career is at stake’,” Aamer recalled.

“I said ‘Bro, what’s happened?’. He told me that my calls and texts with Ali had been recorded and had reached the ICC.”

Majeed, who said a friend had told him about the ICC “probe” then explained to Aamer the way his name could avoid being linked publicly with that of Ali was if he did the agent the favour of bowling two no-balls to order.

“I mean on the one hand he was telling me that a report about me had gone to the ICC, and on the other that he wanted me to do two no-balls for him.

“I was panicking so much it didn’t even occur to me how ridiculous it was. “I knew that it was cheating cricket; that it was out of order, and that it shouldn’t happen.”

Reflecting on how he got into trouble, Aamer said: “I was stupid. I should have told someone. I didn’t do it for money. Thanks to Allah, I trust myself to distinguish between right and wrong.

“They (Butt and Majeed) told me that I was in trouble for texting Ali and what was in those texts. And they said that ICC had managed to record them. There had been no need for these guys to make this story up.”

Aamer, who faces an uncertain future, thanked his family and long-time mentor Asif Bajwa for their backing.

“It’s a very difficult time but good people are boosting my morale and giving me courage.” 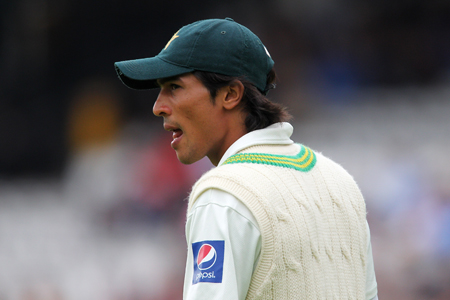 Meanwhile, a former International Cricket Council chief on Tuesday accused India of fostering corruption in the sport, saying illegal betting in the country was the root cause of the problem.

Ehsan Mani, who headed the ICC between 2003 and 2006, estimated Sunday’s Asia Cup match between India and Pakistan in Dhaka attracted bets worth $US500 million ($A473 million), but did not say how he had arrived at the figure.

“Unless the betting industry is brought under control in India, you can’t stop match-fixing,” he told the New Delhi-based Mail Today in an interview.

“There’s no doubt that India, certainly Delhi and Mumbai, is the epicentre of cricket betting.

“I’m a strong advocate of legalising betting in India, and bringing it under control of regulatory authorities so that … the conduct of bookies can be monitored properly,” he added.

“You’ll find that the risk of corrupting players around the world will reduce significantly.”

Mani urged the ICC, headed by federal Indian minister Sharad Pawar, and the Board of Control for Cricket in India (BCCI), to pressure the government to legalise betting.

Mani, a Pakistani chartered accountant, said India should look at the legal gambling systems in Britain and Australia.

Mani said lucrative Twenty20 tournaments, such as the Indian Premier League and the Big Bash in Australia, had emboldened illegal bookies.

“Obviously, high-profile matches like the IPL and Big Bash leave a lot of scope for players to be corrupted; whether they are being corrupted or not, I can’t say,” he said.

“I think IPL must have added hugely to the cricket betting industry in India.”