The real Fiji: Eager to escape the well-worn tourist trails, we head for the hills

Yet there’s a whole lot more to this South Pacific idyll than what can be seen from the edge of an oasis-themed swimming pool. And there’s no better place to see it than on the main island of Viti Levu – a hyper-fertile body of towering mountains, old-growth rainforests, raging rivers and bat-filled caves – most of which are easily accessible but still very much off the beaten path.

It’s only on visiting the highlands that one comes to understand that the ‘real Fiji’ lies not on a map, but in the welcoming hearts and open minds of its village people. From the stern yet welcoming handshake of a village headman, to the open-door policy of Hindu festivals and Sunday mass, to the deep philosophical discussions reserved for the small number of travellers who venture into Viti Levu’s spiritual heartland, Fiji remains an adventurist’s wet dream.

The Sleeping Giant Nowhere in Fiji is the contrast between the interior and the coast more starkly manifest than in the Sabeto Valley. Perched beneath The Sleeping Giant, a thickly forested saw-tooth ridge, which, when viewed from a southerly vector resembles a prostrated human form,this velvet-green basin lies but a 10-minute drive from the airport.

The Sabeto Valley makes for an ideal introduction to the slow, wholesome way of life enjoyed by the friendly villagers and farmers who live and die in the highlands. Comprised of an eclectic mix of Melanesians and the descendents of Girmitiyas – Indian labourers shipped here to cut sugarcane in the 1870s – they love nothing more than to kill time drinking kava, a mildly narcotic pepper-plant around which all Fijians bond. 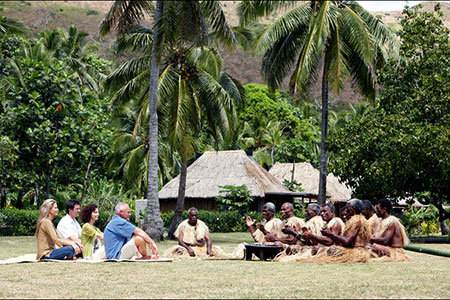 The highlanders are also kings of hospitality. When I went to see the rainforest at the village of Nagado – an hour-long, 50-cent bus ride up Sabeto Road – I ended up at a traditional Indian wedding where I was afforded the dual title of official photographer and special guest. A similar thing happened to Paul Mueller from Hamburg, the only other Westerner I met during my weekend there. He’d planned to visit the nearby geothermal hot springs, where mud wraps and Fijian bobo massages are offered for a nominal fee, but was instead roped into a game of touch rugby and a swim in the Sabeto River with a group of local kids.

“The villages here are nothing like the pretentious touristy ones where they come out singing and dancing,” says Michelle Khan, co-owner of Stoney Creek Resort, a budget-priced eco-lodge recently listed among the world’s top 10 “Coolest Hostels” by UK newspaper The Guardian. “They have nothing to sell but the organic fruits and vegetables they grow, everything from eggplant to wild bananas to green chilies, spinach and pawpaw.”