Adventureland: Where to go for thrill-seeking fun in New Zealand

There are times when I love my work – and yet there are some rare occasions when I’d rather be picking chewing gum off the pavement for a living. Times like these. I’m hanging upside down in a position known as ‘The Gimp Goes To Hollywood’, 109m above Queenstown’s Shotover River.

A long cord reaches from my harness to the middle of the canyon, where it’s attached to another cord stretching across the great divide. A much shorter cord attaches me to a platform. There’s a release mechanism on the shorter cord, which is about to be utilised. A crowd of around 20 people are watching with an expression that says, “we’re not nearly that stupid”.”

If the Canyon Swing crew hadn’t known I worked for TNT, I could probably have got away with a nice straightforward, upright, feet-first leap of faith. But they know I’m “the TNT guy”. And they want to have some fun. “Seven … six … five … four …” 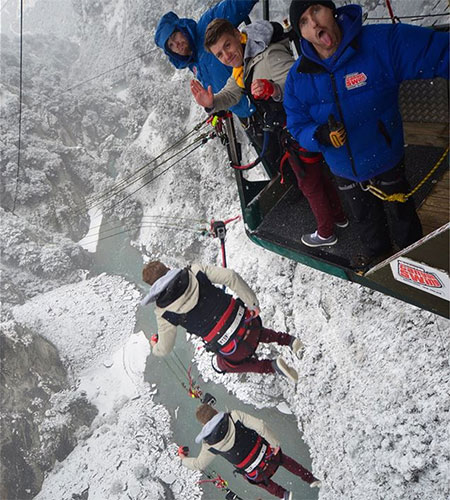 As they strap my camera to my palm, and thoughtfully pass on some photography tips, the crew are barely concealing their sadistic joy. I feel like I’m part of a doomed experiment, and there’s no turning back.

“How you feeling Damian?” asks one for the crew with a big grin. I mutter something unprintable and flash an “I’m-going-to-die-aren’t-I?” smile.

“Right, well, just, let me know whenever you’re ready to …”

It’s hard to explain exactly what goes through your head. But it’s something like this: Aaaaarrgrgghhh. Yaaaahhooooooo. I’m going to dieeeee. This is amazinggggggg. Heeeeeeelllllp. I don’t want this to stoppppp. Stopppp … And then I do. The fall turns into a long, relaxing swing across the canyon. And I feel sensational. Invincible. Loved-up with life. When I get hauled back up, the people who sent me to almost certain death are now my best buddies. And I’m one of them. And I want to do it again, straight away. And I do. I think I’ll keep my job actually. 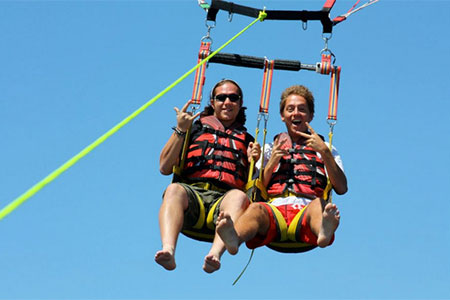 Queenstown’s parabungee is the bungee jump of the gods – a three-in-one thrill, plus you get to sit in an elevating throne.

First we speed onto the lake on a boat, with a parachute slowly filling with air behind us. The jump master fastens my seatbelt and sits behind me. Then the chair, attached to the boat by a cord, slowly lifts. I feel like C-3PO under Luke Skywalker’s Jedi power in the Ewok Village in Return Of The Jedi. With other jumps you start at the top – the fear is with you from the start. With this one it hits you more suddenly.

We’re happily ascending and I’m soaking in the gobsmacking views – much of The Lord Of The Rings was shot around here. We’re more than 150m high and climbing and I just want it to go on and on. But then the jump master explains he will shortly undo my seatbelt, and I remember why I’m here. Oh, shit. I don’t want to go down. It’s nice up here. I take a look down. Never take a look down.

The jump master unclips my seatbelt. I don’t like him very much anymore. He asks me to stand up. “And whenever you’re ready,” he says casually, “just jump.”

No matter how many bungee jumps you do, there’s still that moment. That agonising moment where you still have a choice. It can feel like a time warp. A thousand things rush through your mind. My predominant thought is: “My girlfriend is watching – I mustn’t be a wuss.”

I lean forward. I teeter on the brink. I shut my eyes. Lean a little more. And I’m gone.

Now here’s the mystery. I’m sure I maintained my debonair cool. I was like James Bond doing just another life-saving stunt. But what everyone watching said they heard was something sounding a little like, “AAAAAAAAAAAAAARRRRRRGGGGGGHHHHHHH!”

Must have been someone else. 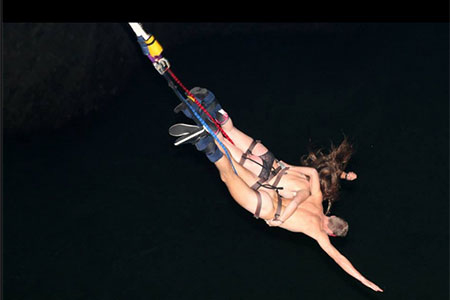 No matter how many bungee jumps you’ve done – and I’d done four by this stage – the N-n-n-n-nevis is still enough to make nails-for-breakfast bikers reach for their teddy bears.

It’s not just the bleak, grey rock walls that surround it. Or the fact that at 134m it’s the highest conventional jump in Australasia (and third in the world). On top of that, you don’t fling yourself off some nice wooden platform; it’s more of a metal hut, hanging precariously over a deep canyon. And it doesn’t just hang, it sways in the wind. And moves according to how many people are in a particular corner. Do I need to spell it out? This is S-C-A-R-Y.

Two hard and fast rules have guided me thus far. Rule one: never look down until you absolutely have to – it will only put you off. Rule two: always try and jump as soon as possible. Thinking time is the enemy of courage. Both these rules are instantly dashed.

To make the bungee cord length easier to calculate, heaviest people go first. It’s the first time I’ve ever regretted not eating enough pies – I’m to jump 28th. So I wait, trying desperately not to watch, for a torturous 15 minutes. Riding the cable car across the canyon to the jump site, I try desperately not to look down at the gaping chasm mocking me as my nerves ebb away. Once inside, I glance at the floor, to see it’s partially made of glass. Looking down is unavoidable.

The room is split between the terrified and the triumphant – wide-eyed post-jumpers buzzing and bouncing with a new level of adrenaline – as loud aggro-metal pumps from a stereo. The pre-jumpers are unable to tear their eyes from the spectacle of seeing people dwindle with their screams into tiny spots beneath them.

And finally, finally, it’s my go. No one had backed out, and I’m not going to be the first. All I have to say is, wow. Wow. Wow. And wow. The waiting was well worthwhile. This is the jump for the most incorrigible, needle-to-the-bone, hardcore, adrenaline-mental-junkies of the lot. 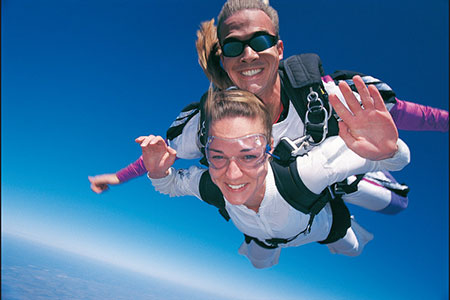 I don’t know which is worse: that my life just flashed before my eyes, or that it was a pretty miserable and all-too-swift affair. Born. Learnt to ride bike. Fell off bike. Grew first moustache. Met Johnny Ball. Lied outrageously on my CV. Got this job. Died jumping out of a plane in a shell suit.

I’m sitting on the edge of an aeroplane with my legs dangling out of the open door, some 12,000ft above Wanaka. The views put the “esses” into sensational. The giant placid lakes Wanaka and Hawea, the snowcapped Southern Alps right the way up to Mount Cook. As I stare down into the epic, inescapable nothingness below, my mouth becomes as dry as burnt toast. My stomach, with a hitherto unannounced genius, is doing all sorts of pioneering balletic moves. Someone says: “Smile”, and points to a camera on the wing. I do the opposite. And we’re gone. Just like that.

A backwards somersault, then we’re plummeting, like two sacks of potatoes. Down, down, down through the skies, through mortality, through a new sensation … and suddenly I realise I’m screaming. Not in panic, but in sheer unadulterated … I don’t know what. Pleasure? Living? It sounds cliched. But holy cow, I’ve never felt so alive, so much like screaming whatever is in my head. “ACCCEEIINNNTHEHHOLLLYY F**CKIIINNNNGGSSSSHHHHIITTTTT. IIICCCAAANNFFLLLYY, IIIIMMM AAABIRRRRDDDDDDWOOOOHOOOO!”

Some 40 seconds later, the parachute pops open and it feels like being shot back upwards, out of a cannon. And then peace reigns. And we drift for another four glorious minutes towards the airfield, and the boring safety of the ground. Quite simply, you haven’t lived until you’ve needlessly jumped from a perfectly good plane. 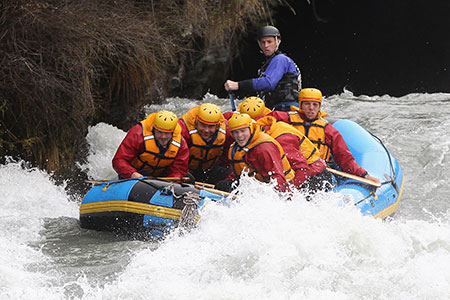 New Zealand has nearly as many bungee jumps as it has sheep. Auckland Bridge and the picturesque Lake Taupo are two of the more popular jumps on the North Island and, frankly, if you leave NZ without doing one you’re a bed-wetting wuss. Skydives also proliferate the country, and there can’t be many more spectacular places in the North Island than Taupo or Rotorua. A jump over the West Coast glaciers might also make it that bit more memorable.

If adrenaline thrills are a drug, Queenstown is the factory. Check out the new Bungy Dome, giving an insight into what it’s like to do a bungee jump. Queenstown, home of bungee pioneer AJ Hackett, is also famed for its whitewater rafting, jet-boating and paragliding. Among the best places to try whitewater rafting are the Shotover, Kawarau and Whanganui Rivers near Queenstown, the Arahura River near Hokitika and the Rangitaiki, Tongariro, Hutt rivers on the North Island.

But what the Kiwis really thrive on is thrillseeking oddities. Take zorbing, another Kiwi invention whereby you strap yourself inside a giant plastic ball and roll down a hill. River sledging is a kind of bodyboarding meets whitewater rafting. Kitted up with a bodyboard, hurtle down a fast-flowing river, trying to keep your mouth shut unless you want to drink five gallons of the wet stuff. Something else a bit unusual is the Via Ferrata climbing route – a long series of permanently fixed cables and rungs which take you high above Queenstown.

One TNT monkey back from NZ recently wouldn’t shut up about the canyoning he did in Wanaka, explaining it as “a non-stop riot of water, rope and woo-hooing”. In other words, it’s abseiling down waterfalls, jumping from stupid heights into rock pools, natural water slides, flying foxes and heaps more water and rope action in a spectacular hidden canyon.

One adrenaline adventure often overlooked by backpackers is mountaineering. Surely you can’t go much higher, literally and mentally, than clambering up some of New Zealand’s mountains?”

One World Observatory to open on 29 May