The now Surrey batsman will complete his stint at Kia Oval in London in late July before playing for the Antingua Hawks in August’s inaugural Caribbean Premier League.

“While I’m enjoying my cricket as much as ever, it just feels like the right time to finish playing,” he told the Daily Mail.

“My body and mind are in great shape and I know I’m going to really enjoy these last few months before the next stage of life begins.”

Ponting’s decision means he won’t appear in the next Big Bash in Australia and that his last competitive match on home soil was for his home state, Tasmania, winning the final of the Sheffield Shield at his home ground, Hobart’s Blundstone Area (Bellerive Oval).

He said that “will forever be a memory close to my heart”.

“It’s one of a lifetime of memories that will become even more special to me in retirement,” he said.

Ponting ended his Test career against South Africa last year with 13,378 runs, the most of any Australian, at an average of 51.85. 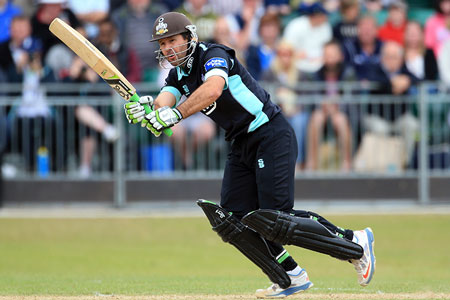 After he announced his retirement from international cricket in December last year, he went on to dominate Shield cricket for Tasmania.

Fans still have plenty of chances to see Ponting play in England before his final flings in the Caribbean and India, which hosts the T20 CL.

He’ll line up for Surrey in the County Championship and a host of T20 matches at the Oval throughout July before his contract ends.

It’ll come as no surprise to his faithful that he plans to spend more time on the golf course (despite his hectic cricket commitments he plays off a handicap of one), and with his family, wife Rianna and their daughters Matisse and Emmy.

He will be moving permanently to Melbourne, where he supports North Melbourne Kangaroos, and continue his charity work alongside Rianna with Ponting Foundation.

Ponting is also weighing up options in the media and coaching, and plans to release his autobiography in late October.

But in true Punter form, it’s down to business until then.

First item on the agenda is to help Surrey to what he hopes is their first win of the season in the County Championship at Headingly against Yorkshire, starting Friday.

Ashes 2013: OFF STUMPED – Australia have one over on England, their bowlers are better batsmen

When to go to England

Lady Gaga and The Darkness at Twickenham Stadium, Sept 8 – 9

UK notches four of the top six universities in the world