Sydneysiders decked out in Australian flags ignored the bad weather as they partied for Australia Day on the harbour foreshore. As Paul Kelly songs blasted out, hundreds of hardy folk took the plunge into Sydney harbour for  the Great Aussie Swim.

“Australians strive to make a great country even better,” he said. 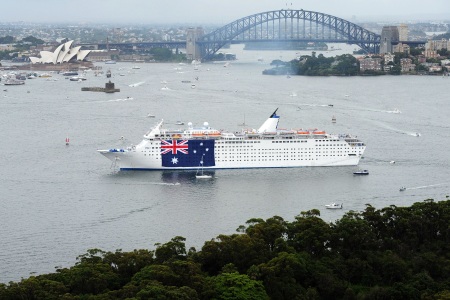 At midday, Sydney residents crowded the shores to watch the city’s famous ferries compete in the Australia Day Ferry Race to the sound of gunfire as the Australian Army’s 7th Field Regiment carried out a 21 gun-salute at Farm Cove.

As the day wore on, Bondi beach filled with drinkers, some chilling on the sand, some floating on inflatables and some gathering on the beach’s rock pool to listen to Triple J’s hottest 100 countdown.

Earlier in the morning, Prime Minister Julia Gillard personally welcomed 27 new Australian citizens at a ceremony in Canberra as 3000 people across NSW prepared to take the pledge of allegiance.

“It is modern Australia’s greatest story. It is of inclusion and belonging,” Gillard said.

In Adelaide, more than 500 people boarded giant floating thongs in an attempt to break the world record and raise money for local surf life clubs. 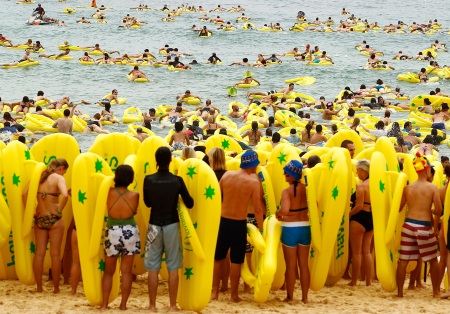 In Canberra, Julia Gillard found herself trapped in a restaurant as 200 protesters from the nearby Aboriginal tent embassy banged on the glass walls. The PM was eventually rescued by emergency services.

In Tasmania, more protesters took part an `Invasion Day‘ demonstration at Hobart’s Parliament Square, calling for the Australia Day date to be changed.

Meanwhile, the weather proved a serious adversary for some trying to celebrate Australia Day as flooding on the NSW north coast continues and many prepare to evacuate their homes.

Those in WA, however, are in line for a heatwave.

Across the globe, Aussies took to Twitter to send Australia Day wishes.

While her sister Dannii wrote: “Happy Australia Day to all the Aussie’s at home and abroad #OiOiOi”

Cricketer Shane Warne (just voted Un-Australian of the year) started the day tweeting: “Breakfast time – Has to be Vegemite on toast on Australia Day surely… Good luck to the Aussies boys in Adelaide too.”

What are you doing this Australia Day?