The four players, two of them having not taken part in the drubbings in Chennai and Hyderabad, were axed from the third Test by the selection panel including coach Mickey Arthur and captain Michael Clarke, for not submitting a three-point critique of how the team could turn around their woeful ways.

Vice-captain Watson, who had been playing as a batsman only, quit the tour after the bombshell to go and be with his pregnant wife Lee Furlong who is due to give birth.

The quartet, including Australia’s most (probably only) dangerous bowler in the tour so far Pattinson, were the only players to not give a written or verbal breakdown of how they think the side could improve ahead of the third Test starting on Thursday.

Khawaja was widely tipped to come into the side in place of struggling number three Phillip Hughes, who was expected to be dropped from the Test team for a third time in his short career. Hughes will likely now get a stay of execution.

Mickey Arthur said this was the hardest day in his coaching career and that the four dumped players are “gutted”.
He added the dropped four would be considered for the fourth Test and that the decision is a “line in the sand” for how Australian cricket will operate moving forward. 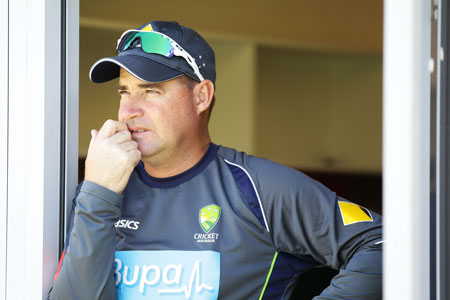 “They are absolutely gutted, as I was having to deliver a message like that,” he said.

“We were all gutted by it, but this is the expectation if you want to play cricket for Australia.

“This is a line-in-the-sand moment.

“This has been the toughest decision that myself, (team) manager Gavin Dovey and captain Michael Clarke have ever had to make.

“It’s a tough, tough decision, but the ramifications for that within our team’s structure and the message that it sends to all involved in Australian cricket is that we are pretty serious about where we want to take this team.”

The presentation Arthur requested was to include how they could improve technically, mentally and as a team.

“I asked the players at the end of the game to give me an individual presentation,” Arthur said.

“We have given these guys absolute clarity, we have given this team a huge amount of time to buy in with what we want to do for the Australian cricket team.
Images via Getty