Even better is that these close-to-the-equator countries are the perfect temperature during the crappiest months of the year in England – namely September/October/November and February/March/April. Don’t be tempted by the cheap deals during June, July or August. You will barely be able to leave your room it’s so sweaty outside. Also Ramadan, when there is no drinking or loud music allowed so all the clubs close down, tends to fall in the summer months. Do remember to be respectful of local cultures with what you wear and how you behave, but otherwise, go and have yourself a ball…

It may not be the capital, but Dubai arguably wears the crown of the UAE. And it’s probably the world’s largest crown, and dripping with diamonds. It’s a strange-old place is Dubai, and if you are the kind of person who gets upset by double standards, we advise against a visit. (Read: gold Lamborghinis vs labourers working in the scorching sun for a pittance; Islamic culture and Sharia Law vs free-flowing booze and various related shenanigans.) Also, if you enjoy a holiday where you get to roam the streets, chat to locals and soak up the history, don’t visit Dubai

The place is basically built around a huge eight-lane motorway so it’s near-impossible to walk anywhere, the locals don’t tend to talk to anyone bar each other (and the place is full of expats anyway), and the UAE is 43 years old; the oldest skyscraper – the Dubai World Trade Centre – was built in 1978.

So why should you visit Dubai? Because it has to be seen to be believed. And, in truth, it’s a hell of a lot of fun. A sample of what you could do in a weekend covers shopping in one of the world’s largest malls before watching the world’s largest dancing water fountain in its grounds; going up to the 124th floor of the tallest building in the world, the Burj Khalifa, sunning yourself on a beach with a view of the sail-shaped seven-star Burj Al Arab (Jumeirah Open Beach); heading for the gold and textile souks in the ‘old’ part of town (Deiraand Karama), buying a ‘Mulberry’ bag for non-Mulberry prices, and taking a trip on a dhow across the Creek for Dhs1 (approx 20p); skydiving over the man-made Palm Jumeirah island, jumping down the Leap of Faith waterslide in Aquaventure, part of the salmon-pink Atantis hotel; heading out into the Gulf on a jet ski or flyboard (that thing where you have jets of water attached to your feet), and finishing it all off with a Michelin-star meal and a 3am finish in a world class club. 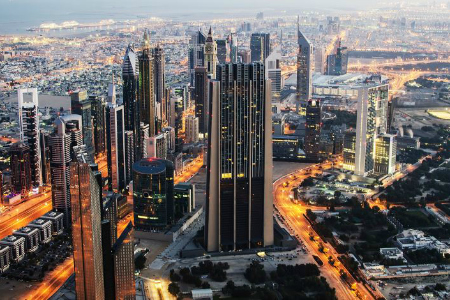 For day trips out of Dubai, we recommend booking on a dhow trip in Kasab, Musandam. Dangle your feet off the edge as dolphins play in the water below and butter-coloured mountains provide a cinematic backdrop. The capital, Abu Dhabi, is also worth a visit, particularly if you are dying for a culture fix as it is soon to be home to Guggenheim and Louvre museums. The gold leaf plastered Emirates Palace is worth a visit for afternoon tea, but we advise against bothering with Ferrari World on Yas Island.To be frank, it’s dull.

Love to visit the Middle East? We offer a range of awesome trips there – find out more here.

Dubai is awash with incredible restaurants – pretty much every celebrity chef has a post here. You should probably just pick one for your trip though as it will likely bankrupt you (we’re talking £100+ per head). We can personally vouch for the quality at Rhodes Mezzanine in Grosvenor House, while a night at Refletts par Pierre Gagnaire is akin to stepping into a jewellery box and eating food from a fairytale.

Souk Madinat Jumeirah is a great evening destination – even if it does look like a film set. Pick from the many bars and restaurants overlooking the man-made canals with fairy-lit abras chugging by and the Burj Al Arab looming in the background.

For a budget meal, try heading into Karama or Deirafor a dearth of great Indian restaurants, or go for a cheap and cheerful Lebanese joint such as Al Hallab, which is as close as you will get to local cuisine; Emirati food is not big on the dining scene as it takes hours or even days to prepare and cook.

The weekend in the UAE is on Friday and Saturday, and Friday brings with it the mammoth brunch. Pretty much every hotel offers these all-you-can-eat-and drink sessions, with varying prices and quality. For exquisite food and a sophisticated setting try Traiteur in the Park Hyatt, for one of the biggest brunches in town try Al Qasr back at the Madinat, and for a messy brunch that inevitably turns into a drunken food fight, try Yalumba.

If you manage to survive, you can spend the rest of the night at The Music Hall for a cool cabaret show, or head to 360 for drinks on an open-air ‘island’ (it’s on the end of a pier), with views across Dubai’s shore line and the ever-present Burj Al Arab (yep, it’s jumeirah.com again – they own a lot of the big resorts in the city).

If you prefer a place with sticky floors that serves pizza to anyone who lasts until the 3am finish, end your night at the infamous Rock Bottoms in Bur Dubai (no website, probably because it’s not owned by Jumeirah, but the taxi driver will know where to take you).

If you’re holidaying in Dubai, you may as well go all out and kiss goodbye to your month’s wages (plus you won’t find any hostels here). A popular spot for celebs is Jumeirah Beach Hotel, probably due to its beach-front location and close proximity to the best bars and clubs.

The Royal Mirage One & Only would be our personal choice: it’s luxurious but in a classic Arabic way, not loud and garish; it’s quiet, low-level and pretty, plus it’s still close to the action. For a ‘budget’ stay, the Citymax Al Barsha offers good rooms in an ugly part of town, but it’s still only a short taxi ride from anywhere (and the taxis are cheap as very cheap chips). For your own infinity pool overlooking rolling sand dunes, rent a car and head to the desert oasis Qasr Al Sarab.

Love to visit the Middle East? We offer a range of awesome trips there – find out more here.

Want to carry on reading? Check out July’s eMag – it’s all in there!

Cat fight: Woman and her dog attacked by roaming band of cats