The BP oil spill is likely to reach Florida shores and cause massive damage to the environment and local economy.

The state has been forced to ditch its advertising campaign claiming that the “Coast is Clear” after a change in the tides pushed portions of the oil spill in the Gulf of Mexico closer to the its shoreline.

It is expected that oil will reach Florida’s beaches by the end of the week, devastating both the environment and the state’s tourism industry. Hundreds of thousands of jobs and billions of dollars in revenue are at stake if tourists decide to cancel their holidays. 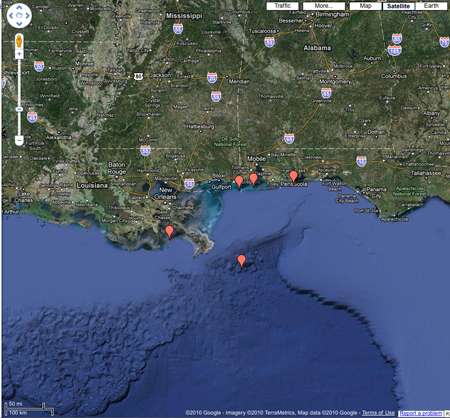 Meanwhile, 37% of Gulf coast waters have been closed during Florida’s peak fishing season. Distressing images have appeared of birds trapped in the slick and struggling to breathe.

Barack Obama said in an interview with CNN’s Larry King that he was “furious” with BP.

“Somebody didn’t think through the consequences of their actions,” he said.

In the latest attempt to cap the flow, BP engineers have cut through the wellhead pipe of the Deepwater Horizon rig and are planning to cap the opening and pump oil to the surface.

However, even if this is successful, it is expected that oil will continue leaking into the sea until two relief wells are completed in August.

BP has been asked for $50 million to help prepare the Florida’s coastline for the oil spill’s imminent impact.

The Queen: #359 Go to a Hen’s Night and hook up with Ashley Cole

London venues could win almost half of national arts budget