Can the Aetherius Society save Japan?

“It will come as no surprise to you that there have been several sightings of flying saucers over the Fukushima plant in Japan,” says the minister.

Sitting in the basement church of the Aetherius Society in Fulham with 20 robed believers this news does, actually, come as a surprise to me.

It shouldn’t. I have been briefed before attending tonight’s ‘Power Circle’ and understand that UFOs are a central tenet of the society’s beliefs. According to followers, extraterrestrial beings are particularly concerned by mankind’s use of nuclear technology and often appear at times of crisis.

Hence the flying saucers over Fukushima.

The Aetherius Society’s stated function is to ‘heal and uplift humanity’ and tonight’s service is dedicated to sending prayers and energy to earthquake and tsunami-hit Japan.

The Power Circle takes place in a semi-circle of chairs facing a red velvet-draped altar. There is a cross, topped with the Ohm sign; a fusion of religious symbols that demonstrates the society’s belief in all religions – from Buddhism to Christianity. A photograph of outer space pays homage to the extraterrestrials.

We begin the service by imagining a violet flame travelling up through our feet and into our ‘Heart Centre’, said to be a few inches in front of the chest. Next, we visualise a white light coming down into our brains and through our bodies.

According to spokesman Mark Bennett, this white light is a real and powerful force and channelling it will  help the victims of Japan’s earthquake.

“If there was enough of this energy, all the world’s problems would be solved,” Bennett tells me confidently.

So, here I am, sitting with my hands raised, eyes closed, visualising the White Light. I haven’t been to a church for years but I certainly don’t remember it being this dramatic.

The room vibrates with the sound of the congregation chanting mantras and the minister’s gravelly voice booms out.

“Blessed are the planetary ones … Theirs is the difficult task of transmutation of the base energies into that state of energy you call love,” minister Roley Asinobi pronounces with intonation worthy of the Royal Shakespeare Company. 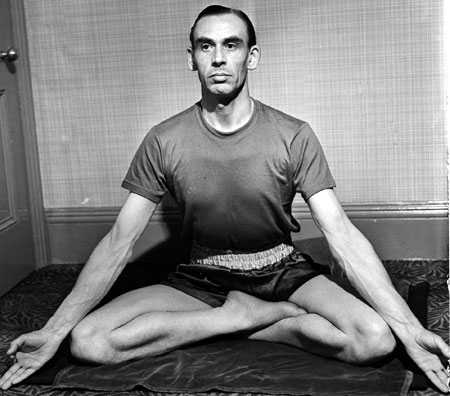 We are guided through ‘The Twelve Blessings’, a series of teachings said to have been transmitted to the society’s founder, George King, through a number of ‘Cosmic Masters’, including an extraterrestrial called The Master Aetherius, and Jesus.

King, who died in 1997, was a dedicated yoga practitioner who, after his communication with the extraterrestrial intelligences, went on to found the Aetherius movement in 1955.  According to the Society’s official website, King then worked for two decades as the “Primary Terrestrial Mental Channel, recording more than 600 Cosmic Transmissions from the Space Masters”.

All of this is way out of my usual mental comfort zone and I ask the very un-wacky looking Bennett (who has a degree from Cambridge) on what basis he accepts these beliefs.

“Your soul will recognise it as true,” he says. “But there is also evidence.”

According to believers, in 1986 King was warned of the Chernobyl disaster by extraterrestrials four hours before it happened. In response, the Aetherius Society activated its ‘spiritual apparatus’ – physical machinery into which extraterrestrials channel energy that can then be directed by humans as needed. The society claims that the disaster was at least partially mitigated through this.

Now Fukushima is the focus and followers passionately believe that their work is an active force for good.

“It’s wrong to say that what we do isn’t practical,” Bennett says. “We’re just in a different position in the chain of help.”

Believe in their claims or not, here, in this small room in West London, a group of earnest people are dedicating some part of their lives to doing what they can for Japan. I leave feeling humbled and just a bit gobsmacked at the unfathomable diversity of people’s beliefs in our open-minded capital.

Keep up the good work Aetheriuns.