Ditch the car and make tracks for America

It may be a stretch to describe Amtrak trains as ‘hotels on wheels’, but short of reliable Wi-Fi, they offer most things you need on an overnight trip: reasonable food and drink, comfy, private cabins, encounters with interesting strangers and plenty of time to unwind, reflect and enjoy the scrolling scenery.

Our trip began with The Crescent from New York to New Orleans. It’s billed the ‘friendliest train’ – and it was. Our Louis C.K-lookalike attendant regularly called in to chat, fetch us drinks and dispense tips on his favourite New Orleans hangouts.

This route rattles through a roll-call of major eastern cities in a matter of hours. Before we knew it, Baltimore, Washington and Philadelphia had all scrolled past in a blur of tenements, water towers and trestle bridges and as night fell, we had our first dining experience.

All meals are included for sleeper passengers and, thanks to communal seating, mealtimes become an important social fixture of the day. Food on board is reliable enough, if a little repetitive, but really mealtimes are all about the encounters. The experience feels like a rolling transatlantic episode of Come Dine with Me.

Our fellow passengers couldn’t have been friendlier. Most were 50+ Americans, making leisurely pilgrimages to visit family or friends. Many hadn’t travelled with Amtrak in decades (only 2% of Americans have ever taken an intercity train) and were just as excited by the novelty of seeing their country this way as we were.

One of the great thrills of long-haul train travel is the excitement of waking up in an entirely new landscape and climate. After a surprisingly sound sleep in our compact cabin, we pulled into the simmering heat and skyscrapers of rush-hour Atlanta – a shock to the system after Autumnal New York – which soon gave way to decidedly lusher scenery, as we weaved through dogwood forests and swamps.

Then there are the platform conversations. Stretch your legs on one of a handful of daily designated stops and you’re bound to make some new acquaintances. At one late night stop in San Antonio while parked in the shadow of the lofty Tower of the Americas for several hours, I hunkered down for some homespun chat with locals about everything from responsible parenting to modern Southern mores.

Clocking in at over 60 hours, The Sunset Limited is one of Amtrak’s longest routes. Once it was even longer, connecting Pacific and Atlantic oceans before Hurricane Katrina destroyed the Florida section. It’s also one of the most diverse in terms of scenery. This double-decker train has a sightseeing lounge with domed windows, giving panoramic views of sugarcane fields and countless trailer homes.

Crossing Texas takes a full 24 hours, but it’s more varied than you might imagine. We pass through towns like Liberty, seemingly plucked from a western film set, all Spanish Mission Churches and clapboard hotels, a rather soggy-looking Houston with its huge hinterland of suburbs, big oil and auto industry and the mountain town of Alpine which sees snow in November. At El Paso the train’s elevation dispenses sublime views of the Rio Grande River Valley before giving a brief glimpse of the troubled Mexican border and shanty towns beyond. Waking up to witness the slow-burning sunrise over the desert remains a stand-out memory – I never knew there were quite so many varieties of cacti. 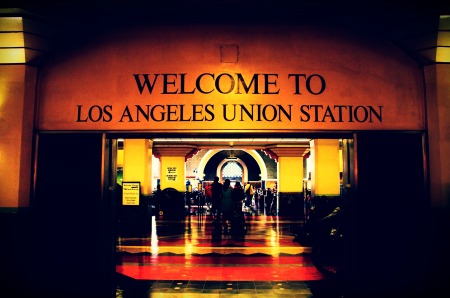 Amazingly, we pull into LA 40 minutes early. It’s still dark at 6am so we shuffle around dazed by the ornate Art Deco interiors of Union Station before checking into the Metro Lounge. These are like airport lounges, albeit less fancy, and most major stations have one. Sleeper passengers get free access, letting you catch up on email and help yourself to drinks and snacks, which is an absolute godsend on journeys that arrive at such ungodly hours.

At 12 hours our third journey, from LA to San Francisco on the Coast Starlight, was a short hop by comparison. You don’t need a sleeper car, but we booked one anyway and with good reason. A sleeper upgrade bags you access to the Parlour Car, a vintage lounge car with swivel armchairs, a civilised bar area where you can enjoy a mimosa while the radio pumps out cheery sixties music and a dining area serving up fine regional cuisine, bringing some welcome variation to Amtrak dining. Plus there’s a dedicated movie car with proper cinema-style, flip seats (largely deserted when I dropped in, possibly because they were showing the woeful Captain America sequel.)

The Starlight truly distils the essence of ‘California of the mind’, the clear highlight being the stretch between Ventura and San Luis Obispo, which serves up hours of uninterrupted and remarkably unspoilt Pacific coastline, with sparkling topaz waters tempting you to yank the emergency stop chord, dotted with nesting cormorants, surfers and rows of immaculate RVs. Past San Jose you enter the salubrious suburbs of David Hockney swimming pools and eventually the valleys of the San Margherita Mountains, whose peaks resemble the backs of great prehistoric beasts baking in the perma-sunshine. 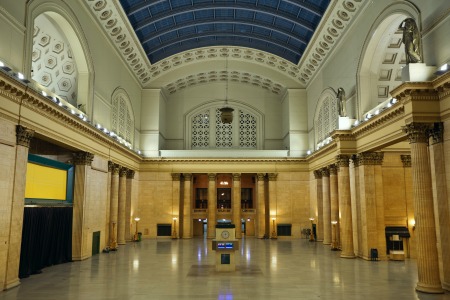 The California Zephyr, from San Francisco to Chicago in 2 nights, is often billed as Amtrak’s signature journey, largely due to the spectacular scenery through the Colorado Rockies, where the burnt orange arroyos compete for retina action with river valleys and foliage taking on their early fall plumage in practically every imaginable shade of yellow, red and green.

The Zephyr rightly makes fanfare of its panoramic car (prepare to dig your elbows in, as some people camp out there all day, a la the old cliché about ‘Germans by the pool’) and even offers occasional bursts of narration for the journey.

As we wound our way through the emerald forest valleys and lakes near the Donner Pass we dined with Maria, a feisty Filipino nurse who incredibly uses the train to commute between Reno and LA. Colonoscopies were her specialty, giving her a unique perspective on people, as she memorably put it, ‘I say to them, I know you inside and out, so you don’t wanna mess with me!’ This in turn made us reflect on the chocolate fondant we were all previously enjoying.

Some stops appear frozen in time, like Grand Junction, its handsome station building poignantly crumbling away to red brickdust, while Dave’s Depot is one of the quirkiest backwater supply / souvenir shops you could imagine.

Although the bar usually stays open late, the observation car was eerily empty at night, a lone harmonica player completing the ambience with his plaintive rendition of Wooden Heart. I was in danger of turning into the comedy ‘fish out of water’ Englishman at the bar with my increasingly optimistic requests, culminating with the audible guffaws I registered when ordering an Earl Grey tea.

Attendants seem to enjoy their jobs, posing for platform pictures and answering curious travellers’ questions. At Elko we’re regaled with some hair-raising tales about backed up toilets and trains trapped for 48 hours in a blizzard.

Things don’t always run smoothly when you’re rolling on the rails in near wilderness but thankfully the closest we came to disaster was when the electricity gave out in Denver Station. We dined in the dark with a painfully reticent German couple, straining the small talk further on our umpteenth and final dinner date.

One Amtrak veteran gave some sage advice early in our trip which holds remarkably well, ‘sit back, relax, enjoy the ride, don’t expect too much – and be sure to pack a sense of humour!’

Manhattan’s hotel prices continue to soar to meet the skyline, so consider staying over the Bridge in Brooklyn. Family-friendly Park Slope, with its leafy avenues of brownstones and Prospect Park, is the perfect spot to escape the city clamour without sacrificing glamour. Back on the island, stroll along the Highline, a stretch of former elevated train track now beautifully rendered with gardens, food stalls and pop-up art, while the 911 Memorial is a stark, vast and sobering monument, once you block out the selfie sticks.

Having recovered brilliantly since Katrina, New Orleans remains a playground for hedonists and aesthetes. Sample live jazz on Frenchmen Street corners, wander around the emerging ‘hipster neighbourhood’ of Bywater, taking in the hyper-coloured houses and feasting on rich culinary treats, from sugary beignets to crispy fried alligator.

This sprawling mega-city has more to offer than spaghetti junctions and star stalking. Downtown is on the up these days, so check out the neon-lit epicurean mecca of Grand Central Market, Frank Gehry’s dazzling chrome swirl the Walt Disney Concert Hall and Olvera Street’s Mexican stalls in the oldest part of the city.

After raising a flipper at the sea lions basking on Pier 49, Frisco’s hilly streets are best conquered by cable car. Tune in and drop out at the Beat Museum, the legendary City Lights Bookstore and nearby Kerouac Alley, where flying books are magically suspended over the busy Broadway street crossing.

Chicago’s high rise skyline rivals New York’s and is best seen on the Chicago Architecture Foundation’s lecturer-lead riverboat tours. Venture out to Lincoln Park for the free zoo and potter around the chic boutiques of Armitage, before rewarding yourself with a bite of sugary delight at Glazed and Confused, which proudly displays a history of the doughnut on its walls.

Lost and Found in Kakadu

Tube that broke down was special Diamond Jubilee train