To get a sense of the city’s rich history, head to Edinburgh Castle, the austere fortress perched atop the crag in the centre of town. The castle has changed hands between the Scottish and the English many times and the free guided tours that take place throughout the day are useful when it comes to understanding this important relationship.

Don’t miss the beautiful St Margaret’s Chapel, the ?oldest part of the castle, or the gritty and engaging Prisoners of War Exhibition in the dungeons. 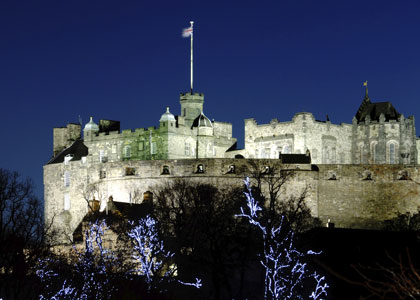 Beneath the castle to the south is Edinburgh’s medieval Old Town, a jumble of steep streets and cobbled lanes. To its north is the elegant New Town, built in the 18th century to provide modern housing for Edinburgh’s grander residents.

Each half has its own bustling high street. In the Old Town, the Royal Mile connects Edinburgh Castle with Holyrood Palace, the official Scottish residence of the monarch. Busy all year round, at festival time the Mile goes nuts, but there’s still plenty to do if you’re not interested in street performance.

In the New Town, Princes Street is Edinburgh’s top shopping destination, as well as being home to the Scottish National Gallery. And for an artistic treat that’s ?not even on most locals’ radar, visit the Mansfield Traquair Centre to see its ?series of lovely frescoes by Phoebe Anna Traquair, the leading artist of the Arts ?and Crafts movement in Edinburgh.

The city’s weather is notoriously unpredictable, even at the height of summer, but if you find yourself with ?a fine day, there’s nothing nicer than relaxing in one of Edinburgh’s parks, ?from Princes Street Gardens, to the Meadows, a short walk through the Old Town from the Royal Mile.

Edinburgh’s ultimate green space, however, is Arthur’s Seat, the long extinct volcano that soars to 251 metres over the city and its estuary, the Firth of Forth. ?It’s about a 20-minute walk to reach the summit, but the views once you get there are unparalleled. As you gaze out over ?the city,  listening to the roar of the crowds from the nearby Meadowbank Stadium, it’s hard not to agree with the proud locals that Edinburgh is the world’s most beautiful Gothic city.

When to go: The Edinburgh Festival Fringe runs from August 5 to 29 (edfringe.com).
Getting there: By train, fares start at £16.50 single or £33 return for London King’s Cross to Edinburgh with East Coast Trains (eastcoast.co.uk). EasyJet flies from London Gatwick to Edinburgh, from £28.99 one way, inclusive of taxes (easyjet.com). Return flights with British Airways from £77 (ba.com).