Cruising Egypt’s Nile is a unique way to see the sights and is guaranteed to be fun.

Feluccas are basic sailboats, which have transported materials and passengers along the river since ancient times. With Bob Marley booming and a deck loaded with comfy cushions, it’s the perfect way to cruise the Nile.

Sunbathe on deck as the rolling fields and tropical palm-lined banks glide past. If you get too hot then stop at a sandy beach for a dip in the Nile. 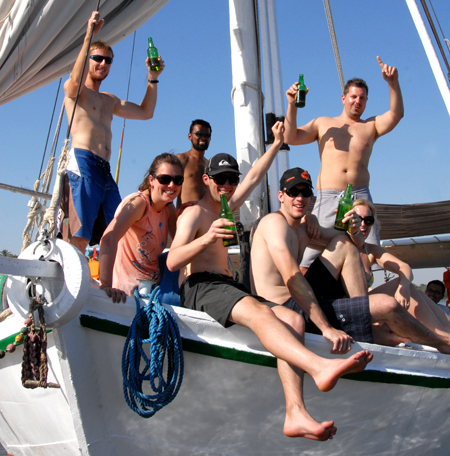 As dusk falls, dock at a Nubian village for a tour and a chance to learn about Nubian customs and traditions.

The Nubian people are a close-knit and private community, often inter-marrying to maintain their identity, and the whole village contributes towards the wedding ceremony.

Get a new perspective on Egypt with a bird’s-eye view. The Valley of the Kings is a visual feast, standing proud amid the scorched desert landscape of the Theban Hills, on Luxor’s west bank. This secret royal burial ground for 62 pharaohs consists of a clutch of lavishly-decorated tombs, which once contained mummies. 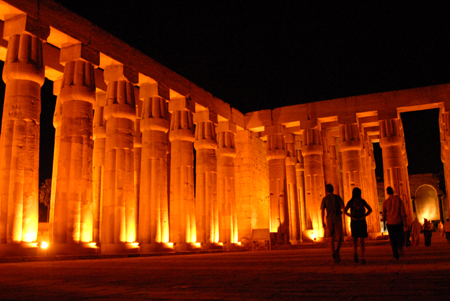 Kom Ombo – this double temple is dedicated to two gods: crocodile god Sobek and the falcon god, Haroeris. The temple’s most beautiful sight is the Outer Hypostyle Hall, which has 15 thick columns and a carved cornice with winged sun discs. The insanely symmetrical temple is located on the bank of the Nile, about 50km north of Aswan, making it a popular attraction for river cruises.

Abu Simbel – a 40-minute flight from Aswan is the rock-cut temple, Abu Simbel, which was built to revere King Ramses II. Construction began in 1244BC and took about 20 years to complete. Visit at dawn when the colour of the stone is at its brightest, and marvel at the four gigantic statues of the pharaoh it honours.

Luxor Temple – dedicated to three Theban gods, Luxor Temple is the only Egyptian temple to open at night. The colour the walls take are truly breathtaking, especially after dark. Built during the reigns of Amenhotep III and Ramses II, it was widely used for rituals and festivals.

Philae – south of Aswan and dedicated to goddess Isis, the temple complex of Philae was built in the 3rd century BC. and relocated to to Agliba island in the 1970s when the Nile was dammed.

Visit Cairo and the Pyramids

Traffic-choked Cairo is a boisterous and lively city, with… 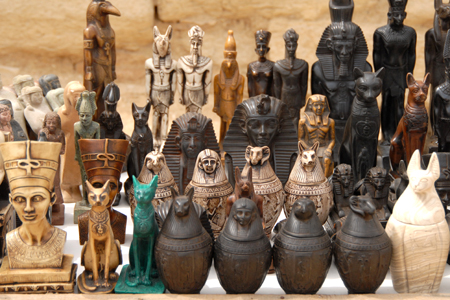 WHEN TO GO: Avoid the searing heat of the summer months, when temperatures regularly exceed 40˚C.
GETTING THERE: Fly direct from London to Cairo.
GETTING AROUND: Trains, buses and cabs operate in most major cities and are easy to access. There are trains between Cairo and Aswan, Luxor, Alexandria, Port Said and Suez. Take a tour if you’re short on time and want to see the major sights. Check out operators such as On The Go Tours.
VISAS: Australians, New Zealanders and South Africans all need visas.
CURRENCY: Egyptian pound. 1 GBP = 8.18 EGP.
LANGUAGE: Arabic.
GOING OUT: A beer is about £2.
ACCOMMODATION: A dorm bed costs from £3 a night, while a hotel room is about £15.
GET MORE INFO AT:  egypt.travel

» Shila Sultana travelled on the nine-day King Tutankhamun Tour with On The Go Tours (020 7371 1113; onthegotours.com/egypt). Trips to Egypt are from six days to 17 days, prices start at £299 and all tours are led by fully-qualified Egyptologists.

London scene: The best films, theatre, comedy and exhibitions to see this week