We’ve scoured the earth to bring you the best travel deals and discounts of the summer, so you can fly as far away from the long jump and the javelin as your wallet permits. No no, don’t thank us. It was nothing.

Southern Europe
Visit five countries on a 10-day trip around southern Europe with Topdeck, enjoying a 20 per cent discount. Travelling one-way from London to Rome, you’ll take in France, Switzerland, Monaco, Florence and the Vatican City. After all that sightseeing, you might need another holiday to recover.
The deets: £488pp, including food fund, including English Channel ferry crossing, camping, transport and sightseeing tours. Departs July 26.  topdeck.travel

Europe from London
Save 10 per cent on an epic 29-day tour through Europe with STA Travel. Taking in 11 countries, you’ll stagger through France’s Beaujolais Wine Region, strike a pose on the French Riviera, catch some rays in Corfu and cheers your beers in Munich and Prague. You can then work off the booze pounds in the Swiss Alps and chill out at the tour’s end point in Amsterdam. And these are just a handful of the destinations along the way. Well, we did say warn you it was epic.
The deets: £2438pp, including food fund, accommodation and transport. Departs July 26.  statravel.co.uk

Amsterdam and Bruges
Visit two of Europe’s most captivating cities with Anderson Tours. Check out the ‘café culture’ in Amsterdam and wander its notorious Red Light District, then take it down a notch with the fairytale beauty and Belgian beers of Bruges.
The deets: £189pp, including coach travel, two nights’ B&B accommodation, sightseeing tours. Departs July 27.
andersontours.co.uk

Hike the Alps
A summer hiking break in Tyrol, Austria, will immerse you in picture-book Alpine scenery, the perfect antidote to people-swamped London. Breathe in the country air, tackle tough climbs, and picnic with jaw-dropping views, leaving you refreshed from city slickness.
The deets: From £105pp, including three nights’ half-board accommodation, snacks, maps and backpacks. Valid throughout July and August.  travelzoo.com 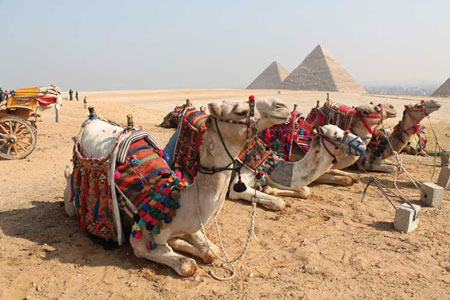 Yacht week
This partytastic summer event invites 50 yachts and 500 people to sail around Greece’s Saronic Archipelago, sightseeing by day and carousing by night. You can join a flotilla of 30-70 yachts or sail away on your own route, depending on the level of debauchery you’re scheming.
The deets: From £256pp per week, including harbour fees, based on 12 people sharing and depending on model of yacht. Running each week from June 30-August 25.  theyachtweek.com

Ottoman tour
Save 10 per cent on a tour of Europe’s Ottoman past with Busabout. From Belgrade and Mostar to Istanbul and Sarajevo, you’ll explore some of the continent’s most eastern corners, which – rather handily – also boast the Balkans’ most hedonistic nightlife. Motoring through Croatia, Bosnia, Serbia, Bulgaria and Turkey, this is a bucket list trek.
The deets: £431pp, includes six nights’ accommodation, breakfasts, guide, walking tours, Sarajevo tunnel entrance fee and a free Lonely Planet guidebook. Departs July 21 and August 4.  busabout.com

European pathway
A 17-day trip through eight countries is offered at a 20 per cent discount with Topdeck. It’s an adventure through France, Switzerland, Italy, Austria, the Czech Republic, Germany and the Netherlands. Happily, the trip takes
in a wealth of Europe’s most classic cities – think Berlin, Prague, Amsterdam, Venice, Paris and Rome for starters.
The deets: £1094pp, including £230 food fund, some meals, English Channel ferry crossings, coach travel, sightseeing tours, trip leader.  topdeck.travel

Eastern promise
Check out Eastern Europe’s must-do sights on this nine-day tour that winds through the Czech Republic, Poland, Slovakia, Hungary and Croatia. Busabout is offering 10 per cent off its ‘Classic Rhapsody’ trip, which includes a bike tour of Krakow, a visit to Auschwitz, and a thermal bath in Budapest.
The deets: £509pp, including eight nights’ accommodation, breakfasts and guided walks. Departs July 20 and 27; August 3 and 10.  busabout.com

South Africa
Take the ultimate South African road trip with a two-for-one deal offered by On The Go. Follow the Garden Route through lush winelands, along breathtaking coastline, and stop off at animaltastic national parks.
The deets: £345pp, book for two and the second person goes free. Valid for Garden Route Discovery trips that depart on July 14 and 28 and August 11.  onthegotours.com

Egypt
Escape to Egypt for 13 days, and at a 10 per cent discount, with Topdeck. Taking the temple trail through Cairo, Aswan and Luxor, the trip gives you essential one-off experiences including sailing down the Nile on a felucca, an overnight desert camp and exploring the Pyramids.
The deets: £603pp, including local payment, transport, accommodation, guided tours and some meals.  topdeck.travel

African safari
Forget being squashed into oblivion on the Tube and float down Botswana’s Okavango Delta, spotting hippos, giraffes, lions and cheetahs instead. Acacia Africa is offering a saving of £189pp on its 25-day Desert Tracker tour, including wild bush camping and Victoria Falls in Zambia.
The deets: From £1354pp, including local payment, starting in Cape Town and ending in Johannesburg. Departs July 21.
acacia-africa.com 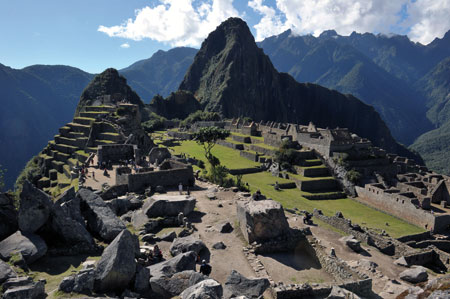 Maldives
If you thought this Indian Ocean paradise was way out of your price bracket, an all-inclusive offer from Thomson might make you think again. Stay at the four-star Olhuveli Beach & Spa Resort – your typical tropical hideaway encircled by white-sand beach and fantasy-blue lagoon – for an almost suspiciously reasonable £1602pp (remember, this includes return flights, speedboat transfers from airport to resort, and a deluxe room overlooking the beach).
The deets: Departs July 22.  thomson.co.uk

South America
From party people in Rio de Janeiro to the awesome power of Iguassu Falls, by way of the dazzling white of Bolivia’s salt deserts and mind-boggling Machu Picchu, this is a trip that will not disappoint – and at a 20 per cent discount.
The deets: This 45-day tour costs £2360pp, departing Rio de Janeiro on July 21. Includes accommodation, transport, some meals, some sightseeing, the four-day Inca Trail hike and
a three-day 4WD tour of Salar de Uyuni.  statravel.co.uk

Kenya to Zambia
Save £215pp on this 24-day odyssey from Nairobi to Livingstone, which lets you live out all of your Africa fantasies. From big game drives to remote Malawian villages and paradise in Zanzibar, this is one hell of an epic overland adventure. Olympics, schmolympics.
The deets: £1354pp including local payment. Departs July 15.  acacia-africa.com

Namibia
Our pick for adventure capital of 2012, Namibia offers a slew of sporting opportunities to rival the Olympics. Swakopmund in particular is the place to pick up a sandboard and slide down some of the world’s biggest dunes, plus you can end the 13-day trip gorge swinging in Livingstone, Zambia.
The deets: £676pp (save £95pp), including local payment. Departs July 27.  acacia-africa.com

China
Save £173 on a Highlights of China tour with Dragoman this summer. A 17-day trip from Xian to Beijing, stopping off to gawp at the terracotta warriors and trek the Great Wall, will be intensive, but a great introduction to this most mammoth of countries.
The deets: £692pp, plus a kitty of about £311, departing July 28.  dragoman.com 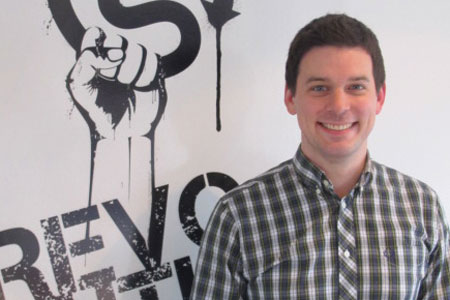 Alistair Butchers is an activity expert at G Adventures. Here are his top five picks for sporty getaways that beat sitting on the sofa watching the Olympics any day.

Peru: Hike, Bike & Raft
“Leave the traditional triathlon to the athletes and see more of Peru than just the Inca Trail trek on this 16-day multi-sport trip. Two days are spent white-water rafting on the Apurimac River, and there’s a mountain bike expedition to Manu Cloud Forest.”
Do it: Priced from £1699pp. Departs September and October 2012.

Nepal: Everest Base Camp
“This is the best trekking route in the best trekking destination, with views of Everest all the way. It’s also great training for anyone looking to do a marathon!”
Do it: A 15-day trek is £749pp, departing from October 2012 until June 2013.

Cycle Cuba
“Cuba’s back roads give travellers a true sense of the country, including a tour of a tobacco plantation and cigar factory for a taste of iconic Cuban culture.”
Do it: Eight days from £649pp, departing year-round.

France: Mont Blanc Explorer
“Literally heading for the hills is a great option if you want to get away from it all during the Olympics, and this option is less taxing than the full trek, with optional spa visits along the way.”
Do it: Eight days from £799pp. Departs June to September.

China Adventure
“This bike-based trip cycles through rice fields and includes a trek along a little-known part of the Great Wall of China. There’s also a visit to the Shaolin Monastery, the birthplace of kung fu.”
Do it: A 15-day China Adventure from Beijing to Hong Kong from £999pp, departing July to October 2012 and March to October 2013. gadventures.com

Have yourself a sporting adventure on home soil with 20.12 per cent (and more) discounts around Britain.

White-water rafting, Nottingham
It might be the land of Robin Hood and a formidable student nightlife scene, but you can add an adrenaline fix to the mix at Nottingham’s National Water Sports Centre.
The deal: White-water rafting for £25pp, a discount of more than 25 per cent on the usual £50pp price tag. Valid until December 31, 2012.
See:  nwscnotts.com

Go Ape, Various Locations
Go zipwiring or take a treetop wire walk around some of the UK’s most picturesque forests with Go Ape!, which is offering 20.12 per cent discounts on activities.
The deal: From £15.27pp, down from the usual £20-30pp. Valid until August 12, 2012.
See:  goape.co.uk

Airways Airsports, Ashbourne
Take to the skies in Derbyshire for a bird’s eye view of the Peak District, one of Britain’s most action-packed national parks. Take flight in a microlight, paraglider or hang glider. Valid until November 30, 2012.
The deal: Buy one, get one half price (discounts from £25).
See:  airways-airsports.com