Catching your first glance of Uluru is a surreal experience. Like stumbling across the Pyramids in Egypt or the Eiffel Tower in France, the rock is without question Australia’s most iconic sight, one of the great wonders of the world. Seeing Uluru for the first time in the flesh – that’s Ayers Rock, by the way, to anyone playing catch-up on Aboriginal rights – is like witnessing a million postcards come to life before your eyes. It’s spectacular.

It probably explains why, turning another dusty bend near the end of our second day touring the Red Centre, a hush suddenly descends over our bus. Mouths gawp and faces press against windows. At least for a few seconds anyway. Regaining our senses, we start clicking away, taking the first of what will rapidly become hundreds of near-identical rock photos. However, as we’d been discovering, there’s far more to the red centre than just Uluru.

Goblin up the views

Setting out from Alice Springs a couple of days earlier, we’d driven across the semi-arid outback into a land we were to learn is home to not just rocks and sand but also creation stories, sacred areas and mythical creatures.

Our first stop, about 300km from Alice Springs, is Kings Canyon, in Watarrka National Park, and we’re immediately met with the challenge of climbing a heart attack-inducing hill. Spluttering our way to the final ridge, a litre or so of sweat lighter, we take in our surroundings and quickly agree that we’ve clearly entered a portal that’s flung us up onto the moon. Luckily, our trusty guide Jake swiftly informs us that our lunar surroundings are actually the Lost City, a bizarre section of the canyon wall which comprises craggy sandstone domes, crevices and animal-shaped mounds.

Indeed, so strange are the surroundings that a couple of times I find myself hanging back from the group, determined to spot one of the rock goblins that must surely call this place home. No luck however – it seems they’re a shy bunch. We carry on around the rim of the canyon, where the 450 million-year-old rocks drop sharply for 300 metres just to our sides in breathtaking fashion. It certainly doesn’t take much imagination to picture the Aboriginal hunting parties that have used the canyon for untold millennia. From Kings Canyon we head onward to our bush camp, where we spend the night wrapped up in swags by the fire under a sky brimming with more stars than a Hollywood red carpet.

We’re up with the sun, eager to get to our next destination – Kata Tjuta, aka the Olgas. While most travellers probably haven’t even heard of these fellas before arriving Down Under, this collection of 36 towering domes, whose name means “many heads”, is one of the most sacred sites to the local Anangu people. Indeed, so important an area for Aboriginal men’s business is this that much of it is strictly out of bounds to us and the stories surrounding it are unknown.

All we do know is that it has something to do with the tjukuritja, the ancestral beings that Aborigines believe long ago shaped the landscape, sometimes leaving their spirits behind in rock formations, such as the Olgas. It is those spirits that the Anangu are entrusted with protecting, which they they have been doing for the past 22,000 years. 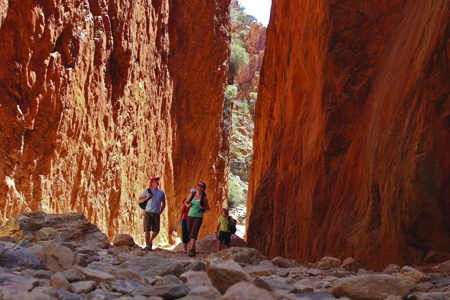 I may have little to no religious conviction myself but hiking through the Valley of the Winds in the sweltering heat, with the “wise men” rising to the skies on each side, it’s easy to understand how these dramatic formations springing out of the red sands have taken on such spiritual connotations.

Battling the scorching gales to cross this rocky and mysterious terrain is definitely an outback highlight. But, having survived the winds, there’s only one place to go. It’s the main attraction, top of the bill, undisputed champion. In the red corner… Uluru.

Once we’d got over our first sighting, we settle into our spots and enjoy the ultimate Aussie experience – sunset over the rock. Before visiting the red centre, and I fell into this trap myself, there’s a serious danger of dismissing Uluru as “just a big rock”. Surely it’s not worth travelling all that way for? But put simply. It’s not just a big rock. It’s cooler than the Fonz in a freezer and is most definitely worth the mission.

The sunsets and sunrises are incredible, as Uluru transforms through endless shades of red and orange before finally disappearing from sight, except for glistening slightly from the stars. But even if you’re unlucky with the clouds and the sunset disappoints, walking the 9km hike around the base definitely won’t. Up close, the rock comes alive with vivid colours and sloping walls, grooves and caves, all full of Aboriginal Dreamtime tales, traditions and practices. The shapes are almost animalistic, making it easy to bring to life the stories of giant ancestral creatures forging the land.

Indeed, it’s for good reason that Uluru is not just revered by the local Anangu people, but by Aboriginal tribes from all across Australia. It’s the country’s spiritual heart. 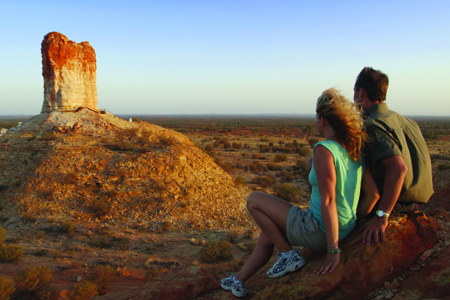 To climb or not to climb

It’s understandable that, after travelling crazy distances to get there, tourists are gagging to climb Uluru. I know I was. But the point is, you shouldn’t. World Heritage-listed Uluru is sacred to its Aboriginal owners, the Anangu. They ask visitors not to climb it because the walking route itself is believed to be a Dreamtime track of huge significance, a pathway used by their spiritual ancestors. Indeed, the route is so sacred the owners would prefer you don’t even photograph it, let alone climb it. As a result, the Anangu feel responsible for the 35 or so people who have died while attempting the climb.

For the time being, it’s not against Australian law, but it is against the Anangu law, which is why they don’t climb it themselves. And it’s not against federal law because the Aussie government effectively screwed over the traditional owners to cash in on valuable tourist dollars.

Yes, the Anangu own the land. They were given it back in 1985, but only on condition that they leased Uluru back to the government for 99 years. And, despite a promise to the contrary by then Australian prime minister Bob Hawke, climbing the Rock was not banned.

However, whether or not the climb is legal should be irrelevant, if you believe in having a healthy respect for local culture. Ignorance is no excuse. Maybe you’re unaware before reaching the red centre, but once there, there’s no avoiding the situation. Pleas not to climb Uluru can be found in the visitor centre, in most guide books and even on a big sign at the start of the climb.

But the reality is the climb remains open. If you’re desperate to tick another must-do off your list, then you will do the climb whatever anyone says. However, if you’ve got any desire to respect Aboriginal culture, then you won’t.