Festivals for the Future: Use your Power – Vote!

Recognising that this could quite possibly be the most important election for a generation, a collective of festival organisers, pub-venue owners, artists and young voters have all come together to try to inspire political engagement with the under 25s ahead of the General Election on 8th June through the overarching campaign of Use your Power: Vote!

The collective, including some of the UK’s most popular festivals such as Boomtown Fair, Shambala, Love Saves the Day, have launched a series of campaigns and initiatives to raise awareness on the upcoming election and how to register to vote. These include; ‘Vote this year, get free beer’, ‘Mayday Mayday’ website and a national awareness campaign among festival organisers, was launched at midday on Thursday 11th May. 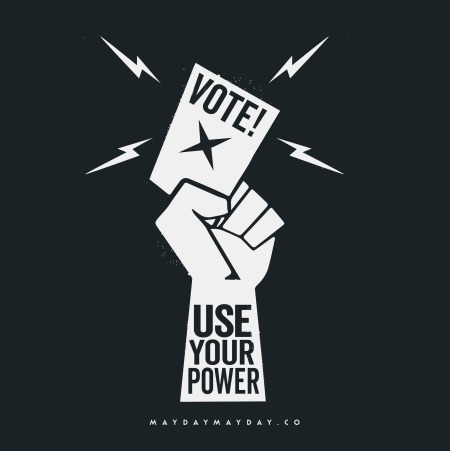 The aim of all three initiatives is that through active promotion of the power that is in the hands of the voter, more young and disengaged people will feel energised to vote, get their voices heard and make their opinion count on 8th June.

With the last date to register to vote less than two weeks away on Monday 22nd May, the passionate collective behind the joint initiatives hope that by reaching out to their varied and extensive networks, people who may not have previously thought politics was for them, will look into the current situation a bit deeper and find their own voice.

The festival collective, made up of 16 of some of the UK’s most popular independent festivals, including Boomtown, Shambala, Love Saves the Day, Bestival, Camp Bestival, Green Man, Blissfields, Tokyo World and Tramlines are aiming to do a large scale public awareness campaign via all their channels at midday TODAY (Thursday 11th May) which will inform people on how to register to vote and aim to open up conversations around issues that matter to their audiences.

Collectively we saw that we were in a pretty unique position with the amount of engagement we have with the younger demographic, and it was our responsibility to do something to help engage people in their own futures.  This feels like an election where each and every vote really will count; an election that should be all about them, and how they want their futures to be. We just want to remind people that they really do have a say, and what they have to say really does matter.

Over the next couple of weeks the ‘Use Your Power: Vote’ initiative will aim to not only extend their network of pubs and festivals throughout the UK to try to engage as many people and networks as possible, but will also be inviting young or disfranchised voters to have their say across their various platforms, including the ‘Mayday Mayday’ website and the individual festival’s social channels.

The third initiative supported by the collective is The Vote this year, Get free beer’ campaign, set up by Joby Andrews from Refresh West bar company which has ambitions to see as many pubs across the UK offer a free pint (or equivalent) to newly registered voters, but not wishing to penalise already registered voters, the opportunity to get tickets to one of the partner festivals is also being offered. For full details on the VTYGFB campaign and the current pubs and breweries involved head to their website here.

More details will be released via the following websites over the coming days and weeks:

Vote this year, get free beer